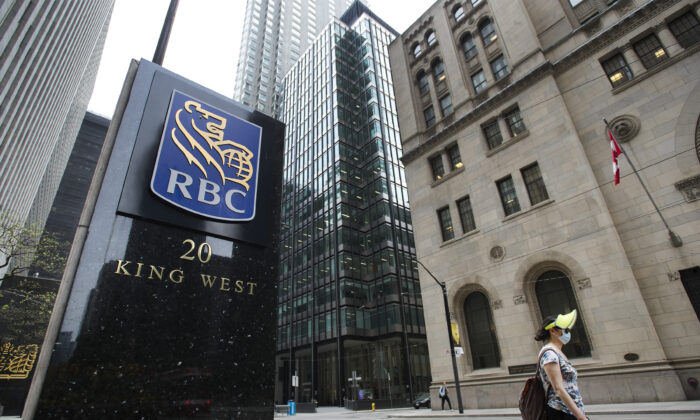 A person walks by the Royal Bank of Canada building on Bay Street in Toronto in a file photo. Canada’s central bank and financial regulator are preparing the country’s banks and insurance companies to deal with potential risks from the changing climate. (The Canadian Press/Nathan Denette)
Canada

Costs, Risks of Green Transition Could Stem From Climate Policy Not Climate Risk Itself, Says Economist

Bank of Canada, OSFI aim to help financial sector manage potential risks from the pivot to a low-carbon economy
By Rahul Vaidyanath

As Canada’s financial authorities work to help their sector develop risk management measures meant to mitigate impacts on the economy and financial system, the risks from federal climate policies could be worse than the potential climate-related risks themselves, an economist says.

The Bank of Canada and Office of the Superintendent of Financial Institutions (OSFI) are currently focused on transition risk—financial impacts from the shift to a low-carbon economy for a geographically vast and cold country that has long depended on fossil fuels. The other main category of climate risk is physical risk—losses due to extreme weather events.

In his assessment of these risks, monetary policy expert Steve Ambler says he believes climate policy is the real threat to the financial system, not climate-related risks.

“Seems to me that, while they [the Bank of Canada and OSFI] don’t really clearly distinguish between these, but I think a lot of the costs of the climate transition—so-called—are coming from the policies, rather than the climate risk itself,” Ambler, an economics professor who recently retired from Université du Québec à Montréal, told The Epoch Times.

The country’s central bank and financial regulator on Jan. 14 published a scenario analysis on transition risk based on inputs from six financial institutions (FIs) including RBC, TD, and four insurance companies.

They make no specific policy recommendations but warn that delaying action would only heighten the risk to the financial sector and the entire economy from increasingly aggressive climate policies.

“If there’s a sharper policy reaction down the road, [it] will impose more transition risk on the economy and in the financial sector,” BoC deputy governor Tony Gravelle said at a press conference.

The Liberal government has committed to net-zero emissions by 2050. And Prime Minister Justin Trudeau in April 2021 announced a loftier target for 2030—to cut emissions by 40–45 percent, instead of 30 percent, below 2005 levels.

The BoC and OSFI say the transition to a low-carbon economy brings about “changes in climate policy and regulation, technology, and consumer and investor preferences.” These shifts can cause changes in asset prices and companies’ earnings, acutely impacting financial institutions that have larger exposures to carbon-intensive sectors, they add.

The central bank and OSFI say that if the financial sector doesn’t assess its risks properly, it could lead to sudden and large losses for FIs and investors and delay the investments needed to mitigate climate change impacts.

OSFI assistant superintendent Ben Gully said Canada’s FIs are in the early stages of managing climate-related transition risks, including using climate scenario analysis. However, a number of uncertainties remain with the proposed approach.

“We have far less data, far less evidence, far less rigour with which to inform various specific views on amounts of capital, which is why in the near term, we’re focused on getting that evidence, getting that infrastructure in place,” he said in response to a question from The Epoch Times during the press conference.

Stéphane Tardif, managing director of OSFI’s climate risk hub, said greenhouse gas (GHG) emissions data, which factor into determining the amount of capital that FIs must have in their holdings of various kinds of bonds and stocks, can be hard to come by.

“[There’s] a lot of inconsistencies in how the emissions data is calculated and reported. So this was pretty evident with the six panel participants,” Tardif said regarding publicly traded stocks.

“So near term, it’s risk management, longer term once that matures, we’ll then move into the capital arena,” Gully said. OSFI, as the federal regulator of financial institutions, sets capital requirements.

The BoC developed four climate transition scenarios over a 30-year time horizon, from 2020 to 2050, that explore pathways consistent with achieving global climate targets.

The scenarios are not meant to be stress tests for the FIs to see how well capitalized they are. Instead, they explore ways in which abrupt changes in global climate policy could lead to financial stress across the system.

An example of how stress could arise is fire sales of climate-sensitive assets, like loans to oil and gas companies, due to their broad adoption by FIs.

Slower Growth, But What of Inflation?

The BoC said that in the scenario analysis, the transition’s economic impacts for Canada are mostly driven by declines in global commodity prices.

Gravelle said that slower global growth and less inflation will arise from consumption shifting away from high-GHG products due to carbon taxes.

“As the global economy moves to decarbonize, there’s a slower amount of growth over that 30-year horizon,” Gravelle said. “That decrease in global demand for those commodities causes a decrease in the commodity price.

While there appears to be consensus siding with Gravelle on slower growth at least until 2030, some say the transition period will actually be inflationary. An environment of slow economic growth with inflation presents a difficult challenge for consumers, businesses, and central banks.

The major investments needed to deal with climate changes will put upward pressure on prices, said former Bank of Canada governor David Dodge in an interview with Reuters for a story published Jan. 13.

Ambler said that if all the countries were to commit to net zero by 2050, there might be a drop in the price of oil, natural gas, and coal, but other commodities that support renewable energy would see their prices “go through the roof.”

The analysis took a conservative view of how the economy and its industrial sectors might evolve. Gravelle noted that it’s very difficult to factor in the development of new technologies and innovation.

In the future, the BoC and OSFI plan to improve their ability to assess the implications of physical risks.

OSFI also announced on Jan. 14 that it will issue draft guidance on climate risk management for federally regulated FIs later in the year.

Ambler is skeptical of the approach being taken by the BoC and OSFI.

“I’m really not a believer that centralized institutions like governments and central banks are capable of evaluating intelligently the risks that are being faced by individual companies,” he said.