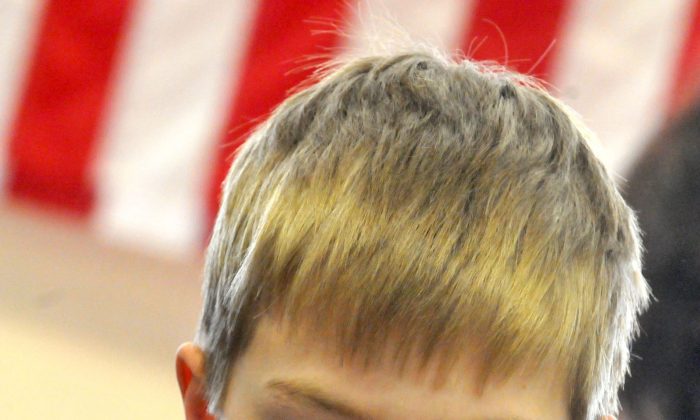 A photo of fifth-grader Daniel Slotten reading for comprehension during an exam that reflects new literacy standards for the Common Core initiative at a Westview Elementary School class in Apple Valley, Minn. on Feb. 20, 2013. (AP Photo/The St. Paul Pioneer Press, John Doman)
US

Costs of Common Core in US Schools

In Easton, Kan., a small district of about 700 students has a pending math textbook order of $75,000 as state lawmakers decide whether to move forward with Common Core standards or to pull back.

A larger Kansas school district, Shawnee Mission School District, has spent more than $350,000 getting ready to implement Common Core, reports the Kansas City Star. The district budgets for such materials are already stressed and some fear the strain of changing the curriculum may be too much.

Cost is a concern as 45 states prepare to implement federal education standards, or Common Core standards. Kansas is among nine of the 45 states that are reconsidering their commitments to Common Core.

The cost of implementing Common Core range from $3 billion to $12.1 billion for the nation, according to a 2012 report by ASCD, an education resources organization that supports Common Core. The report was funded by the Bill and Melinda Gates Foundation.

The Heritage Foundation, an education think tank, reports that $16 billion is a modest estimate for the cost of implementing Common Core.

The “business as usual,” model of implementation is the priciest, states the ASCD report. This means buying hard-copy textbooks and providing in-person professional development training for teachers. This approach would cost an estimated $12.1 billion nationally.

On the other end of the spectrum is the approximately $3 billion-dollar “bare bones” approach, including open-source teaching materials and online professional development. The “balanced implementation” would blend the two and would cost about $5.1 billion.

The report notes that higher education institutions would save on remediation costs with better-prepared students.

Some money could be saved on test development as states could share the cost. Online assessments would require some schools to invest in more computers.