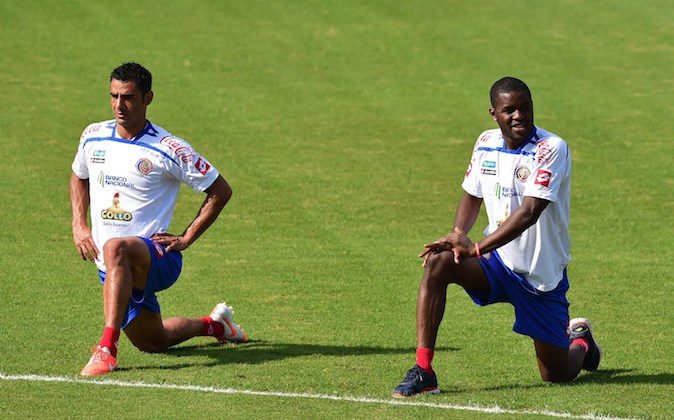 The game will be broadcast on Repretel HD, Teletica En Vivo, and Repretel En Vivo in Costa Rica, as well as NERIT1, NERITsports, and Neritan HD in Greece.

RIO DE JANEIRO (AP) — This World Cup just got a whole lot easier for Costa Rica. According to the rankings, anyway.

Having left former champions Uruguay, Italy and England behind to sensationally win their group — one of the toughest at the World Cup — the Costa Ricans line up against their lowest-ranked opposition so far in Greece in the second round on Sunday.

It surprisingly has Costa Rica finding itself the favorite for a place in the quarterfinals. That’s certainly a new situation for the small Central American country which arrived hoping to avoid finishing last in a group of supposed powerhouses and now has a chance to be in the last eight of the whole tournament.

“We were the Cinderella and now we are favorites. That’s respect and we earned it,” Costa Rica defender Michael Umana said.

Costa Rica came through with a succession of shocks, beating 2010 semifinalist Uruguay 3-1, stunning 2006 winner Italy 1-0 and then not having to stretch itself in a 0-0 draw with England. No one can accuse the team of having it easy and yet it’s unbeaten and hasn’t conceded a goal at the World Cup since the 24th minute of its opening game.

Because of that, Greece, a former European champion, appears happy to accept the underdog role for the last 16 game at Recife’s Arena Pernambuco.

“At this stage, everyone is considered an opponent who is better than us,” Greece midfielder Lazaros Christodoulopoulos said.

Costa Rica’s expectations have sky-rocketed, not just because of the results but the way they earned them. It progressed from the group stage for the second time and first since 1990, doing it with panache and attacking verve and with forwards Joel Campbell and Bryan Ruiz leading from the front.

“What we have accomplished is now part of history but there are still some chapters left and we want a happy ending,” Costa Rica director of national teams Adrian Gutierrez said. “We know that this team has a ceiling but we still haven’t seen it.”

Campbell, especially, has been a revelation — helped, maybe, by his loan to Greek club Olympiakos from England’s Arsenal. The striker, who turned 22 on Thursday, could play against up to four of his Athens club teammates this weekend.

“I don’t think I’ll be giving him a call,” Greece midfielder Andreas Samaris said of contacting his club mate before the game. “But if I did, I’d wish him the best of luck and then tell him his team is going to lose.”

If Costa Rica coach Jorge Luis Pinto is honest, Greece is probably the team he would have chosen to play out of the other 15 in the knockouts. In fact, both teams could argue they’ve had a lucky draw.

“Sure, I would choose Costa Rica over some other teams,” Christodoulopoulos said, “but what Costa Rica has done is a miracle.”

While Costa Rica has been flying high from the start, Greece has taken a little time to get going. The Greeks scored their first goals of the World Cup in their last group game and secured qualification at the very end via a hotly-disputed injury-time penalty from Georgios Samaras against Ivory Coast.

Greece prides itself on defensive solidity and a more measured approach, but it’s a team that is completely comfortable with its style and unafraid to play to its strengths.

“Our tactics have been the same in all the games: To stay tight in defense to contain the opponents and stay dangerous in attack,” Greece coach Fernando Santos said. “The mistaken perception is to think that every team should play like Brazil or Barcelona, but they have the characteristics to play that way. … But we are Greece.”

Those tactics have worked before. Costa Rica should be aware that Greece has its own fairytale, when the team surprised everyone to win the 2004 European Championship. Veteran midfielders Giorgios Karagounis and Kostas Katsouranis were part of that triumph a decade ago and are looking for one final football memory here in Brazil.

Neither country has ever gone to the World Cup quarterfinals. One of them will now.