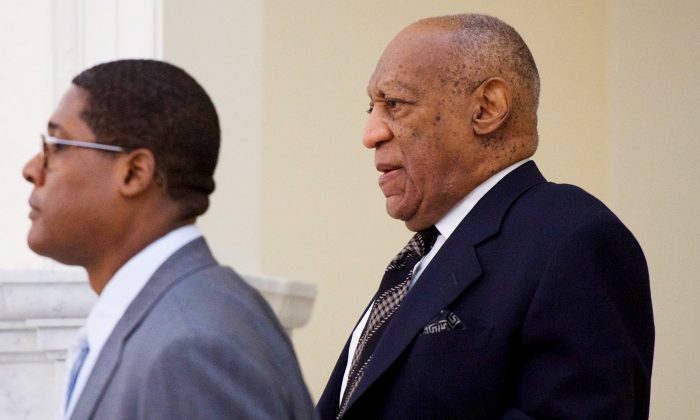 NORRISTOWN, Pennsylvania—Comedian Bill Cosby returns to a Pennsylvania court on Monday for the start of his retrial on charges of sexually assaulting a one-time friend who had thought of him as a mentor, almost a year after a jury reached a deadlock in the case.

Cosby’s defense team and prosecutors are expected to make their opening arguments on the first day of what is expected to be a one-month trial in Montgomery County Courthouse in Norristown, Pennsylvania. A seven-man, five-woman jury was selected last week.

In June, the first jury came to a unanimous verdict on charges that Cosby drugged and assaulted Andrea Constand, 44, at his home outside Philadelphia in 2004. Judge Steven O’Neill declared a mistrial.

The retrial of the man once known as “America’s Dad” will unfold against the backdrop of the national #MeToo movement, which emerged last autumn. In the informal campaign, a parade of women have ended years of silence to tell their stories of sexual misconduct and assault by powerful men in Hollywood, politics and business.

Cosby, 80, best known as the benign patriarch on “The Cosby Show,” is accused of attacking Constand, 44, a former administrator at Temple University, Cosby’s alma mater. If convicted of the most serious charge of aggravated indecent assault, he could face up to 10 years in prison.

Constand is one of more than 50 women who have accused him of sexual assaults, some dating back decades.

The defense team, headed by Tom Mesereau, best known for successfully defending singer Michael Jackson at his 2005 child molestation trial, has said that Cosby denies all allegations and any sexual encounters were consensual.

The court is likely to hear much of the same evidence as in the first trial, where Constand testified that Cosby gave her pills that rendered her powerless to stop him from touching her.

But each side comes to the second trial with fresh ammunition after a series of pre-trial rulings by the judge.

O’Neill granted a prosecution request to allow testimony by five other women who accuse Cosby of sexual assault in order to show he engaged in a pattern of behavior, using a particular modus operandi. At the first trial, he allowed prosecutors to call only one other accuser.

And he granted a defense request to allow testimony from a woman who claims Constand mused aloud about falsely accusing a famous man to get money. The judge barred her at the first trial.