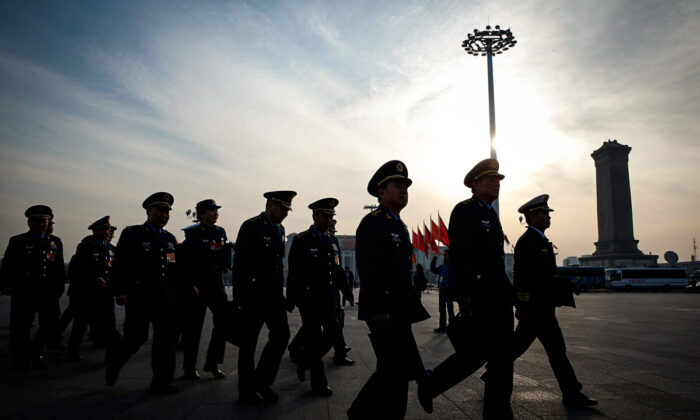 Chinese military delegates arrive at the Great Hall of the People before the third plenary session of China's rubber-stamp legislature, the National People's Congress, in Beijing on March 12, 2015. (Lintao Zhang/Getty Images)
Military

Corruption is a widespread phenomenon in China’s military, where officers, including generals, have relied not on their duration of service or military prowess to rise in the ranks, but rather bribery and connections, according to analysts.

Experts have commented that a lack of competent leadership now threatens to be severely detrimental to China’s warfighting capabilities.

In the Chinese military, all positions and ranks have been sold with quoted prices, state-run media outlet Xinhua quoted three major generals from the Academy of Military Sciences saying on March 10, 2015.

“A commander from a military district bribed Xu Caihou [then vice chairman of the Central Military Commission (CMC)] 20 million yuan [$3.14 million] for a senior position. Xu then promoted this one, rather than another commander who just bribed him 10 million yuan [$1.57 million],” Maj. Gen. Yang Chunchang said.

In the Chinese military, there’s only one general who has real combat experience. Gen. Li Zuocheng, 68, served in the Vietnam War in 1979 as the director of a company consisting of about 100 soldiers. Li is the chief of the Joint Chiefs of Staff of the CMC.

“They bought their positions. They won’t spend their lives fighting,” Zhou Meisen, screenwriter of anti-corruption propaganda TV series “In the Name of People,” told regime mouthpiece People’s Daily on April 6, 2017. “Once there’s a war, who can fight? Who will sacrifice his life to defend the country?”

“A general may still lead the military when he doesn’t have any combat experience. He can learn from books and military exercises,” U.S.-based China affairs commentator Tang Jingyuan told The Epoch Times on Dec. 17. “But if the generals and officers received their positions and ranks by bribes, they don’t have the knowledge and capability to command the military to fight in a war.”

Tang went on to say that as a result, Chinese officers and soldiers won’t focus on improving their skills, knowing that they need to buy the position and ranks they hope to achieve.

“Fighting isn’t a game,” Tang said. “Once there’s a war, these officers and soldiers can’t fight.”

Instances of generals being fired have become common under the Xi regime.

On April 29, the Chinese regime announced that Maj. Gen. Song Xue, former deputy chief of staff of the Chinese Navy, was suspected of a “serious violation of discipline and law.” He had been dismissed from his position on April 8.

Song was China’s key leader for rebuilding and training personnel for its first aircraft carrier, the Liaoning. Overseas Chinese commentators say that Song was involved in bribery in the Liaoning project and that he was punished because the aircraft carrier doesn’t have the combat effectiveness that a carrier is expected to have.

On April 26, the Liaoning carrier strike group—which has three Chinese destroyers, one frigate, and one supply ship which sail with the Liaoning—couldn’t prevent an Arleigh Burke-class destroyer with the U.S. Navy from entering into the middle of their formation as they sailed through the Philippine Sea.

“There’s no way to stop the corruption in the Chinese military.”

In his remarks, Zhou cited an example of officers actively embezzling military funds.

“In one military exercise, they [officers] sold the vehicles and gasoline,” he said. “They then reported that the vehicles were destroyed during the drill and the gas was used. The extra funds then go into the officers’ pockets.”

In another example, Zhou noted that during a military exercise, “the soldiers only shot 10 cannons in the exercise, but they reported that 100 cannons were used.”

“The corruption is too serious to describe,” he said. “To use their [the officers’] words, [the military] is all dark from surface to inside.”

On Aug. 18, Beijing-headquartered dwnews.com reported from Beijing that Gen. Zhang Yang, who reportedly committed suicide, went by the nickname “Gunny Sack Zhang” because he used to put cash inside gunny sacks and use them to bribe senior officers or receive bribes from junior officers. Zhang had given each of then-CMC vice chairmen Gen. Guo Boxiong and Caihou 25 million yuan ($3.9 million) in cash at one time.

“Only several generals died on the battlefields when the Chinese Communist Party (CCP) launched its first war, the Nanchang uprising, on Aug. 1, 1927, until the Korean War [which ended in a truce on July 27, 1953],” Zhou told People’s Daily in 2017. “Now, an anti-corruption campaign has sacked over 140 generals.”

Anti-corruption has been Chinese leader Xi Jinping’s main task after taking the position of CMC chairman in 2012. Xi, the supreme commander of the Chinese military, used an anti-corruption campaign to fire the generals who lacked loyalty and to promote new generals who support him.

On June 16, 2018, dwnews.com reported that Xi’s attempts to reform the Chinese military were facing resistance.

“At present, the anti-corruption situation in the military is still severe and complex,” state-run media outlet People’s Liberation Army Daily published on April 13, 2020. “The issue of violating the rules and violating the disciplines happen frequently.”

On Aug. 28, 2017, Gen. Zhang Yang, former director of the political work department of the CMC, and Gen. Fang Fenghui, former joint chief of staff, were investigated for bribery and violations of discipline.

Three months later on Nov. 25, Zhang committed suicide. In October 2018, the CCP posthumously removed Zhang from the CMC and the communist party, stripped him of his rank, and confiscated his properties. Xinhua reported that Zhang owned a very large and unexplained amount of wealth and that his level of corruption was very high.

Fang was sentenced to life in prison by a Chinese military court on Feb. 20, 2019, with the crimes of bribery and owning huge amounts of property from unknown sources.

The Chinese army has five theater commands, with each covering one region. Parallel to this, there are ground forces, an air force, a navy, a rocket force, a strategic support force, a joint service support force, and an armed police force. Troops are led by both the theater commands and the forces at the same time. Additionally, the People’s Liberation Army has 25 provincial military districts and three garrisons that report to the CMC directly.

Xi has changed the commander of Western Theater Command four times in nine months. In December 2020, then Commander Zhao Zongqi retired. Xi promoted Zhang Xudong, then deputy commander of central theater command, to take over. In June, Zhang was dismissed because of sickness. Xu took over the position and was replaced in September by Wang. It’s unknown why Xi dismissed Xu and where Xu is.

“Xi Jinping hasn’t built a military which is loyal to him,” Wang Youqun, a columnist for the Chinese-language Epoch Times, wrote on Sept. 8. “Xi has promoted over 60 generals since taking over as CMC chairman. These generals control the CMC, five theater commands, seven forces, and military universities. However, not all these newly appointed commanders are loyal to him, and this is the reason why he has kept on appointing new commanders.”

Wang also wrote that Xi has named corruption as the reason for the removal of the generals who aren’t loyal to him because the majority of the generals are involved in bribery, abuse of power, extortion, fraud, collusion, and embezzlement.