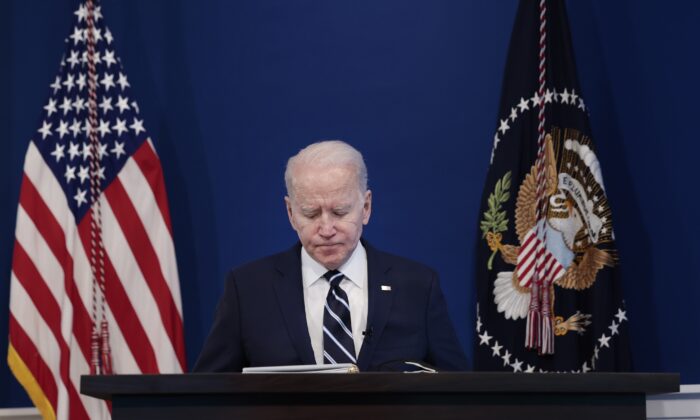 President Joe Biden gives remarks on his administration's response to the surge in COVID-19 cases across the country from the South Court Auditorium in the Eisenhower Executive Office Building on Jan. 13, 2022. (Anna Moneymaker/Getty Images)
Vaccines & Safety

Correction, Mr. President: It’s a Deadly Pandemic of the Vaccinated Too

Despite promises from President Joe Biden and top health officials that COVID-19 vaccines would prevent severe illness, death, and perhaps even transmission of the virus, data indicate that thousands of Americans are dying from the illness even after having been vaccinated.

Striking evidence comes from California, Georgia, and Illinois, where a third of people dying with COVID had been vaccinated–even some who had received a third booster shot. In the absence of publicly available federal data, the three states offer some of the best numbers on the post-vaccine impact of a pandemic that has claimed 950,000 American lives.

Some health experts say such deaths were predictable. After all, initial reports on the Pfizer, Moderna, and Johnson & Johnson jabs promised vaccine efficacy rates in the 90 percent-plus range–not perfection. So even if a substantial percentage of the population is vaccinated, vaccinated people will still die. And the vaccines were designed to combat a strain of the virus before the Delta and Omicron variants appeared, suggesting the new scourges may have played a major role in the vaccines’ disappointing effectiveness.

The president has largely held to his stance, allowing during his State of the Union address on Tuesday that new vaccines might be needed, even as reality increasingly undermined it. In December, he asserted, “This is a pandemic of the unvaccinated”–words soon to become an administration mantra.

He would later warn: “We are looking at a winter of severe illness and death for the unvaccinated–for themselves, their families, and the hospitals they’ll soon overwhelm.”

With such debatable claims, authorities have arguably harmed the vaccinated and unvaccinated alike. The vaccinated–especially the elderly or immunocompromised–have been given a false sense of invincibility. The unvaccinated have been not only scapegoated; some have lost their jobs as the administration’s pronouncements were used to enforce inflexible employer vaccine mandates.

It is true that COVID mortality statistics are uncertain. They are clouded in many cases by failures to distinguish those who died from COVID versus those who died with COVID, and by variations in how “unvaccinated” is defined–with numerous deaths classified as unvaccinated up until two weeks after a victim’s second jab.

But the fairly detailed and unambiguous data from California, Georgia, and Illinois show the vaccinated making up a significant percentage of those dying from COVID as the new strains became prevalent. When the Delta strain circulated from mid-November to mid-December of last year, the vaccinated accounted for 21 percent of all COVID-related deaths in California and Georgia, and 38 percent in Illinois. After Delta was overtaken by the Omicron variant, the proportions in California and Georgia rose substantially to over 33 percent—a level comparable to Illinois, which remained at its already higher rate.

The paucity of overall national data was illustrated by a remarkable Feb. 20 New York Times story, in which COVID reporter Apoorva Mandavilli wrote that the Centers for Disease Control and Prevention “has published only a tiny fraction of the data it has collected.” She quoted an official speaking anonymously saying that the CDC was “reluctant” to make detailed information about hospitalizations sorted by vaccination status available because it “might be misinterpreted as the vaccines being ineffective.”

Yet available state and other statistics suggest just that—at least when measured against the original Biden standard that the vaccinated “are not going to die”: The proportion of fully vaccinated and/or boosted deaths against the number of total deaths is substantial, and appears to have been gradually increasing in recent months at least in several states.

Of the eight states publishing detailed, so-called “breakthrough” death data on the vaccinated to the present, RealClearInvestigations found that Massachusetts–with a substantial 75 percent fully vaccinated rate–suffered the highest percentage of vaccinated deaths: 55 percent from Jan. 1 to Feb. 12, 2022.

Even a recent little-publicized and less comprehensive CDC report notes that among those 18 years of age or older across 25 U.S. jurisdictions, from early April to late December 2021, there were approximately 7 million COVID cases and 95,000 deaths among the unvaccinated, versus approximately 3 million cases and 23,000 deaths among the vaccinated. That one in five deaths were associated with the vaccinated, according to the study, suggests protection weaker than the public has been led to believe.

But in a Jan. 19, 2022 op-ed in The Hill, Dr. Lyndon Haviland of the CUNY School of Public Health castigated dissenters for making much of vaccinated deaths:

By trumpeting the term “breakthrough cases,” public health authorities are spreading the impression that these infections are novel, unique, and unanticipated by the scientific community. In fact, the vaccine was designed precisely with this likelihood in mind, and it is working exactly as intended. With cases of hospitalization and death largely isolated among the unvaccinated population, it clearly shows the vaccines are doing their job and achieving the desired outcome.

But given the significant and rising proportions of double- and triple-vaccinated deaths, this assertion–representative of much of the U.S. public health establishment–is obviously misleading. Haviland did not reply to a request for comment from RealClearInvestigations.

Dr. Peter Hotez, Dean of the National School of Tropical Medicine at Baylor College of Medicine, urged a rethinking of the term “fully vaccinated” as it applies to severe illness.

“I think the key here is to understand that by last fall it was clear that ‘fully vaccinated,’ meaning 2 doses, was anything but,” he said. Hotez points out that by six months past the second dose, CDC data have shown “only 57 percent protection vs hospitalizations and 38 percent vs ER visits.” He says mRNA vaccines should be viewed as a three-dose series and people with two doses “only partially vaccinated.” He cites data showing that after three doses, there is a “90 percent reduction in hospitalization and 82 percent reduction in ER visits. … Those who receive three doses are highly protected against hospitalization and presumably death as shown by the CDC.”

Pfizer CEO Albert Bourla made the same point more bluntly in an interview with Yahoo News on Jan. 10, 2022. “We know that two dose[s] of the vaccine offer very limited protection, if any,” he said. “The three doses with a booster … offer reasonable protection against hospitalization and deaths, and against deaths, I think very good.” On Feb. 11, the Washington Post reported that a new CDC study shows booster protection against hospitalization waning to 78 percent after four months.

At a recent press briefing, Dr. Fauci stated: “The potential future requirement for an additional boost or a fourth shot for mRNA or a third shot for J&J is being very carefully monitored in real time and recommendations, if needed, will be updated.”

Dr. Fauci did hint at the need for boosters very early on; as early as January 2021, he was contemplating the need for updated shots to handle new variants. But he, the president, and the media pushed the widespread uptake of shots designed to stymie the original Wuhan strain.

RealClearInvestigations asked for comment from the authorities on issues of vaccine messaging and effectiveness, including the White House, Dr. Fauci’s NIAID, and the CDC. They did not respond.

If nothing else, it seems clear that this is not a pandemic of the unvaccinated. A question that remains to be answered is whether public health officials had an obligation to be more forthright about the vaccines’ limitations.

Meanwhile, the administration has been keen to call for the censorship of those it views as peddling pandemic misinformation–linking them to “violent extremist attacks during 2021” in a recent Department of Homeland Security bulletin. Largely unacknowledged is a variety of research papers from leading institutions, dating back to at least December of 2020, suggesting that mutations could undermine the effectiveness of coronavirus vaccines.

In Tablet Magazine on Feb. 14, Dr. Vinay Prasad, an oncologist and public health researcher at the University of California, San Francisco, decried the politicization of the Centers for Disease Control: “The agency is not in fact impartial (and thus not sufficiently scientific), but captured by the country’s national political system.”

“This is a precarious situation” he wrote,” as it undermines trust in federal agencies and naturally leads to a trust vacuum, in which Americans feel forced to cast about in a confused search for alternative sources of information.”

This article was written by Clayton Fox for RealClearInvestigations.