Corpses and People Collapsing to the Ground Spotted in Many Locations

The coronavirus calamity hit Wuhan when local residents were joyfully making preparations for the Chinese New Year. In just a few days, Wuhan turned from a vibrant city into a ghost town. Crematorium staff wearing protective suits were seen in many neighborhoods, taking away corpses who had died from the virus. Around late January, there were footage and images circulating online showing people collapsing in the street and in hospitals across Wuhan.

Location: Hanyang District of Wuhan City, Hubei Province
Man: Too bad! It is happening right behind our residential complex. I am here at Decai Elementary School. A resident in our complex who passed away is now being carried away to a van.

Man: I’ve seen it with my own eyes at Xinhua Road’s cross section, a corpse being taken away. With my own eyes! I spotted it when I came out to drive around. See, carried away on a stretcher.

A patient suddenly collapsed to the ground when lining up in a hospital. The money he brought with him for treatment is scattered all over.

Man in the background: Someone suddenly fell. It looks like they’re trying to rescue him using CPR.

Elderly Man: Show this footage to your family, and they will understand why they must wear a mask.

Man: Another body, here’s another body. Look, look how many bodies are already loaded inside the minivan. Look, one, two, three, four, four of them. Here’s another one. That’s five in total. There are a total of five bodies in the back of this minivan.

Right before the CCP claimed /that there were no new infections inside China, a man collapsed right in front of the Tanzikou Water Corporation in Nanchang City, Jiangxi Province. According to his ID card, he came from Qianjiang City, Hubei Province.

It’s unclear where he had been and how many people he had interacted with. 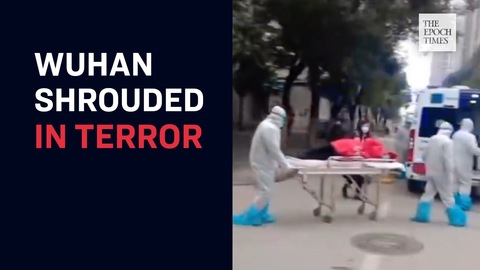