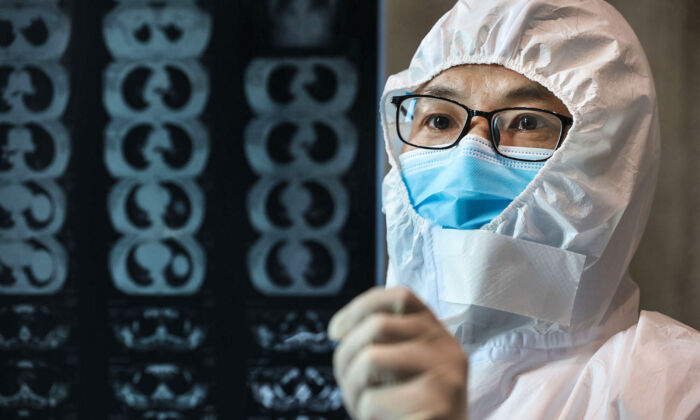 A doctor looks at a lung CT image at a hospital in Yunmeng county, Xiaogan city, in China's central Hubei province, on Feb. 20, 2020. (STR/AFP via Getty Images)
By Eva Fu

The deadly coronavirus that is morphing into a global threat could have infected five to 10 times more people than Chinese officials have acknowledged, a group of U.S. researchers said.

The Feb. 18 study, which has not been peer-reviewed, was co-led by Lucia Dunn, economics professor at Ohio State University, and Mai He, pathology professor at Washington University School of Medicine in St Louis.

Drawing from both official and unofficial data sources, the study suggested the cumulative infections and deaths could be “substantially higher” than officially stated—by a factor of 5 to 10.

“So many people are doubting the numbers in China … that we think we should look at alternative numbers,” Dunn said in an interview with The Epoch Times.

The data was pulled from official figures; a mobile mapping site from Chinese tech giant Tencent; and reported cremations at funeral homes in Wuhan, the epicenter of the outbreak.

Anomalous infection numbers appeared briefly on at least two separate occasions on Tencent News, an online news portal that provides real-time tracking of official outbreak data. On Jan. 27 and Feb. 1, the platform reported a cumulative infection (including both confirmed and suspected cases) of more than 213,000 and 233,000 each. In contrast, Wuhan authorities on Feb. 2 reported 14,380 confirmed infections and less than 20,000 suspected cases—only a tenth of the Tencent figure.

The numbers on Tencent were gone in a few hours, although not before Chinese netizens snapped screenshots and circulated them around the internet.

Rather than dismissing these figures as a technical glitch, Dunn said the Tencent data may be an unintentional “leak” that offers a clue at the outbreak’s true scale.

The Epoch Times and other media outlets interviewed staff at several major Wuhan crematoriums, who said they have been operating 24 hours per day since late January, which is five times—or 20 more hours per day—higher than their regular workload. According to the researchers’ calculations of an annual case fatality rate of 0.551 percent, the additional operating hours at the funeral homes implied an additional 680 deaths than normal on a daily average, according to the study. The researchers suspect the spike to be a direct result of the outbreak.

Based on a Lancet study which projected that infection numbers could double every 6.4 days, the researchers came up with death rates for different scenarios, ranging from 2.8 percent to as high as 32.8 percent.

Dunn said they then estimated from those numbers the outbreak’s starting time, which they found to be between Sept. 25 and Nov. 5.

Wuhan authorities first announced the existence of a mysterious pneumonia on Dec. 31 involving dozens of cases, and claimed that the first patient exhibited symptoms in early December.

But based on the findings, Dunn said Chinese officials would have known it a lot earlier.

Due to the lack of transparency in China, the researchers were not able to independently verify numbers from Chinese sources firsthand, and therefore the estimates can only serve as an approximate.

There’s a sense that the “[Chinese] government numbers are definitely too low,” and “off by orders of a magnitude,” Dunn said.

A recent report (pdf) by the Imperial College London also suggested a case fatality rate of 18 percent in Hubei province, where Wuhan is the capital.

“We are beginning to feel really confident that we have no confidence in the government numbers,” Dunn said.

Li Wenliang, an ophthalmologist and one of the eight medical professionals who tried to warn fellow medics about the virus the day before the official announcement, was reprimanded by local police for spreading rumors. He later died from the virus after treating an infected person.

“The government covered it up,” Dunn said, noting that Chinese authorities fired the Wuhan and Hubei Party chiefs amid growing public anger of how they handled the outbreak.

Zhou Xiangyang, mayor of Wuhan, later admitted to the city government’s failure to make timely disclosures about the outbreak, but said he “could only publish information” after clearing it with central authorities.

“You see why nobody wants to put it [information] out there … These guys lose their job when it’s known that they have some big catastrophe brewing, so nobody wants to come forward with that kind of bad news,” Dunn said.

“Communist governments always suppress information, keep information from their citizens—especially when it’s bad news. And this is what we have to show for it,” she added.

The Epoch Times has spoken with dozens of Wuhan residents who were denied treatment at hospitals due to the overwhelming number of infected coronavirus patients.

In a Feb. 4 undercover investigation, a senior official at a Wuhan funeral home told The Epoch Times that the facility’s daily intake has drastically increased since Jan. 22, the day before the city issued an unprecedented lockdown to quarantine residents in an effort to contain the outbreak. Chinese health officials have required people who die from the virus to be cremated.

The official said the funeral home’s workload was around four to five times more than normal. On Feb. 3, it peaked at processing 127 bodies. Under pressure to keep up with the demand, the facility’s workers have been working round the clock even through the Lunar New Year, China’s biggest public holiday. He said two other major crematoriums in Wuhan were also on overdrive.

“I count myself as blessed if I can sleep for two or three hours a day,” he said in the interview, adding that they would need at least 40 to 50 more workers to cope with the need.