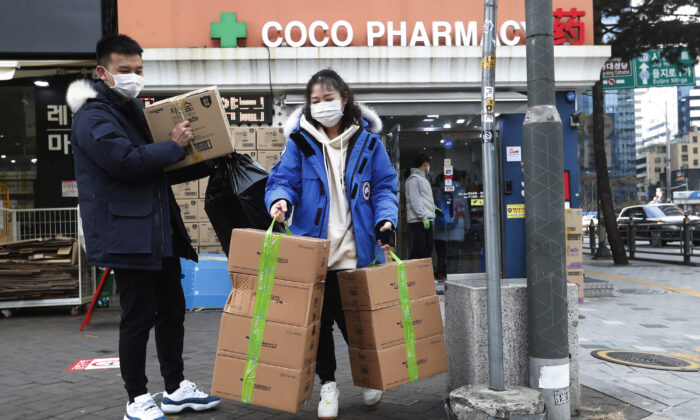 The following updates are from Jan. 29. Click here for updates from Jan. 30.

The health ministry in Japan has said that three Japanese nationals evacuated from Wuhan, China, onboard a government-chartered flight have tested positive for the novel coronavirus in Tokyo where they are being monitored, the country’s national broadcasting organization NHK has reported.

After landing in Tokyo and having their health checked by local authorities, 12 of 206 evacuees were hospitalized for showing symptoms such as coughing or fever. The remaining passengers were asked to self quarantine at home for two weeks.

Another 440 Japanese nationals have requested the government’s help to leave Wuhan, with a spokesman for Japan’s Foreign Ministry saying that more flights are being arranged. He added that he expects the number of evacuation requests to increase over the next few days.

Americans From Wuhan Not Quarantined but Shouldn’t Leave: Officials

Health officials said Americans evacuated from Wuhan should stay at a California air base for at least three days under intense monitoring.

“They can leave, however they are sitting in the middle of a military base. Any discussion around departure would be just that, a discussion,” Rear Adm. Dr. Nancy Knight, the director of the Centers for Disease Control and Prevention’s (CDC) Division of Global Health Protection, said at a press conference after the plane landed at March Air Reserve Base.

“If someone demands to leave right now, that is where all of the partners … would come together and talk about what needs to be done. And this would be discussed up to the highest levels within the U.S. government as well.”

Dr. Christopher Braden, deputy director of the National Center for Emerging and Zoonotic Infectious Diseases, said that the approximately 210 passengers all said they were willing to stay in isolation for the 72 hours.

After three days, the people would be free to leave if they gave no indication of being high risk, such as having contact with a known patient, or having symptoms.

Finland became the third European county with a confirmed coronavirus case on Wednesday, following cases in France and Germany.

The female patient traveled to Finland from Wuhan on Jan. 23. Symptoms developed on Jan. 26.

“The 32-year-old from Wuhan came to the emergency room yesterday and she was taken for evaluation and examination,” Markku Broas, senior physician of the Health Care District of Lapland, said at a press conference at a hospital in Rovaniemi.

Along with respiratory symptoms, the woman had a fever, he said.

Medical officers with the CDC met a plane full of Americans evacuated from China in California on Jan. 29.

The federal agency said the officers were sent “to assess the health of the passengers.”

“CDC staff have conducted risk assessments to ensure the health of each traveler, including temperature checks and observing for respiratory symptoms,” it said in a statement.

The agency is working with the California Department of Public Health and Riverside County Public Health and emphasized that any of the approximately 210 U.S. citizens who exhibit symptoms will be taken to a hospital for further evaluation.

Passengers not exhibiting symptoms of exposure will be asked to stay on the March Air Reserve Base in Riverside County in housing to allow CDC medical officers to perform more thorough screening and to better understand each individual’s exposure.

The CDC rates the risk of coronavirus exposure to the American public as low.

Canadians Worried About Family and Friends in China

Chinese-Canadians said they’re worried about their family and friends back in China.

Toronto resident Jason Wang told The Epoch Times that his 72-year-old mother contracted the virus in Wuhan but hasn’t been able to get any care. She has isolated herself at home.

“We don’t know when it will be her turn in the queue [to receive treatment], and I don’t know how many people are ahead of her. I can only wait for the director’s superiors to make a decision, and I don’t even know who the superiors are.”

The World Health Organization (WHO) “deeply regrets” an error made in a situation report on the new coronavirus, Director-General Dr. Tedros Adhanom Ghebreyesus said in a statement.

The Geneva-based agency said in a report late Sunday that the risk for coronavirus was “very high in China, high at the regional level and high at the global level.”

In a footnote in the report, WHO said it “incorrectly” stated in reports over the preceding three days that the global risk was “moderate.” The shift, though, did not mean the organization was declaring a global health emergency.

“WHO deeply regrets the error in this week’s situation report, which inserted the word ‘moderate’ inaccurately in the coronavirus global risk assessment,” Ghebreyesus said in a statement on Jan. 29.

“This was a human error in preparing the report. I have repeatedly stated the high risk of the outbreak.”

Ghebreyesus also announced that he was reconvening WHO’s emergency committee to see whether the coronavirus outbreak now warrants declaring a global health emergency. The committee recommended against declaring such an emergency last week.

A plane carrying some 200 Americans who were in the Chinese city of Wuhan, where the new coronavirus started, landed in California on Jan. 29, footage from local stations showed.

The plane landed around 8:15 a.m. local time at March Air Reserve Base in Riverside County. It was originally slated to land at Ontario International Airport about 35 miles east of Los Angeles.

The Americans, including U.S. contractors, State Department personnel, and other U.S. citizens, first landed in Alaska to refuel.

Everyone passed two medical screenings, Alaska health authorities said in a press release. Passengers were also screened twice before departing Wuhan and monitored while on board.

Two of the new cases are a husband and wife, both 56, who arrived in Singapore on Jan. 19. Neither showed symptoms on their flight. The other new case is a 56-year-old man who flew into Singapore the next day. He also said he didn’t show symptoms on the flight.

Authorities in Australia said two additional patients on top of the five previously reported have tested positive for the new coronavirus.

The Victoria Department of Health and Human Services said a man in his 60s who lives in Victoria tested positive. He is isolated and recovering at home.

The man traveled to Wuhan and became sick two days after returning from China. Five close contacts he had are being monitored; two are children who are not going to school for the time being.

The Queensland Department of Health said the seventh case is a 44-year-old Chinese national from Wuhan.

National authorities said that people who were in contact with any confirmed coronavirus cases now must self-isolate for 14 days following exposure, as well as people who returned from Hubei Province, where Wuhan is located.

Two hundred and one Americans who were evacuated from Wuhan, the epicenter of the new coronavirus, passed medial screening in Anchorage during a refueling stop.

The passengers had already been through two screenings in China and were monitored on the flight. The mood was jubilant.

“The whole plane erupted in cheers when the crew said, ‘Welcome home to the United States,'” Dr. Anne Zink, the chief medical officer for Alaska, said in a statement.

The plane took off, headed to California. The flight was slated to land at Ontario International Airport in San Bernardino County but was diverted to March Air Reserve Base in Riverside County.

“For our fellow Americans on the airplane, we wish them Godspeed as they head to California and ultimately to their homes,” Alaska Gov. Mike Dunleavy said in a statement.

Other countries including Japan, South Korea, and Australia had either evacuated citizens from Hubei Province or were making plans to.

Virus Spreads to the Middle East

The coronavirus that originated Wuhan in China has been found in the Middle East, with the United Arab Emirates reporting its first confirmed case on Jan. 29.

The case involves members of a family who were recently in Wuhan, Emirates News Agency reported, citing UAE’s Ministry of Health and Prevention.

Saudi Arabia last week denied reports that there was a confirmed coronavirus case in the country.

An Indian official said an Indian nurse working at a hospital in Saudi Arabia was infected but the Saudi Center for Disease Control and Prevention said that the nurse’s case was related to Middle East Respiratory Syndrome (MERS), not the new coronavirus.

British Airways has suspended all direct flights to and from mainland China amid the coronavirus outbreak after the United Kingdom’s foreign office warned against nonessential travel to the country.

The airline’s official website BA.com currently shows no direct flights to mainland China available to book, with a message: “Sorry, there are no direct flights for this route, flights with connections are below.”

“We apologize to customers for the inconvenience, but the safety of our customers and crew is always our priority,” British Airways said in a statement on Jan. 28.

Other airlines have suspended some or all flights to and from China, including United Airlines, China Airlines, and IndiGo.

China’s most popular social media, WeChat, published a notice on Jan. 25 announcing new regulations and punishments for “those who spread rumors about the new form of pneumonia.”

“A variety of unsubstantiated comments posted to the internet constantly stir up public panic,” the notice read,

“All those who spread fake news and thus disturb social order will face up to three years in prison, detention, or disciplinary action. Those who have caused serious consequences will be given 3-year to 7-year prison terms.”

The notice also claimed that WeChat is now working with a “rumor defying agency” to refute and delete any rumors appearing on WeChat. Accounts of those users found spreading rumors may be suspended.

Amid growing concern at the spread of a new virus outbreak in China, international sports have been postponed and Olympic qualifying tournaments are being taken elsewhere.

The international ski federation on Jan. 29 canceled the first World Cup races scheduled for testing the mountain venue for alpine skiing at the 2022 Beijing Olympics. A men’s downhill had been scheduled for Feb. 15 at Yanqing to start a two-race weekend.

“Due to the outbreak and continuing spread of the Novel Coronavirus, FIS, the Chinese Ski Association and its Yanqing Local Organising Committee, have jointly decided to cancel,” the races, FIS said in a statement. The federation said it would advise later if the downhill and super-G races will be rescheduled.

That followed a decision by the International Hockey Federation to postpone Pro League games in China, and qualifiers for the Tokyo Olympics scheduled in February in soccer, basketball, and boxing being moved outside of China.