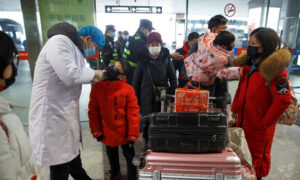 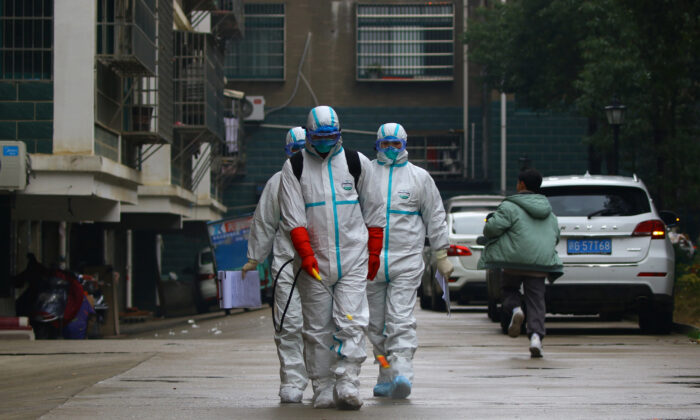 Workers from the local disease control and prevention department in protective suits disinfect a residential area following the outbreak of a new coronavirus, in Ruichang, Jiangxi Province, China on Jan. 25, 2020. (cnsphoto via Reuters)
Coronavirus Outbreak

The coronavirus outbreak in China is disrupting global supply chains because no one will travel for business, according to China Law Blog, a website that caters to elite attorneys involved in cross-border business and run by international law firm Harris Bricken.

According to China Law Blog editor Dan Harris, “the coronavirus is impacting pretty much everyone in China.” Getting to international airports is difficult and whole cities in China are closed off. Applying for visas to other countries has slowed to a crawl; while expatriates and Chinese citizens are afraid to leave China because they may be denied entry into the country of destination and may not be able to return to their place of residence.

Foreign embassies and consulates in China have already scaled down to essential personnel, “with plans to eventually evacuate them as well.” This explains why foreign governments are arranging evacuation flights from China for their officials and citizens.

Scores of people have been infected by the coronavirus, or Wuhan pneumonia, but China Law Blog states that nobody believes the official numbers “because virtually nobody trusts the veracity of the Chinese government.” Hospitals that have run out of coronavirus testing kits are labeling new “deaths as pneumonia or other sicknesses.” A Yale epidemiological study predicts 190,000 infections in Wuhan alone by Feb. 4.

Zhou Xianwang, the Mayor of Wuhan that is at the epicenter of the epidemic, said that 5 million people had left the city for Chinese New Year before the travel quarantine was imposed. Many are worried that these people have the potential to spread the disease widely. The mayor recently came under fire for saying that the city had enough medical supplies to contain the coronavirus during a Jan. 26 press conference.

The Financial Times reported that several big companies near Shanghai like Foxconn, Johnson & Johnson, and Samsung Electronics have been ordered to shut down temporarily. To put on a more positive face, many cities are prolonging the current holiday by a week.

But China Law Blog reports that huge numbers of Chinese factories across the nation are effectively already closed because employees “do not want to work cheek by jowl with 3,450 other people, some of whom might be spreading the coronavirus.” Even those factories that remain open are reporting dramatic increases in quality control failures.

Massive Chinese layoffs and furloughs without pay are accelerating as inventories of raw material and subassembly are consumed. Most coastal factory workers are part of the 150 million rural migrants that as “temporary” workers cannot claim unemployment benefits under the system of hukou permanent residence permits. They can return to the farms, but rural villages rely on family remittances for about a third of their income.

President Trump in a Monday morning tweet stated: “We are in very close communication with China concerning the virus.” He added: “We have offered China and President Xi (Jinping) any help that is necessary. Our experts are extraordinary!”

But by Monday evening, the U.S. State Department issued its first general travel advisory to “reconsider travel to China due to novel coronavirus.” The basis for the updated risk advisory is the U.S. Centers for Disease Control and Prevention issuing a Level Three Warning to “avoid all nonessential travel to China.”

The State Department has also acknowledged that it has ordered the departure of all its non-emergency U.S. personnel and family members from Hubei Province and that the Chinese regime may put travel restrictions on Americans “with little or no advance notice.”