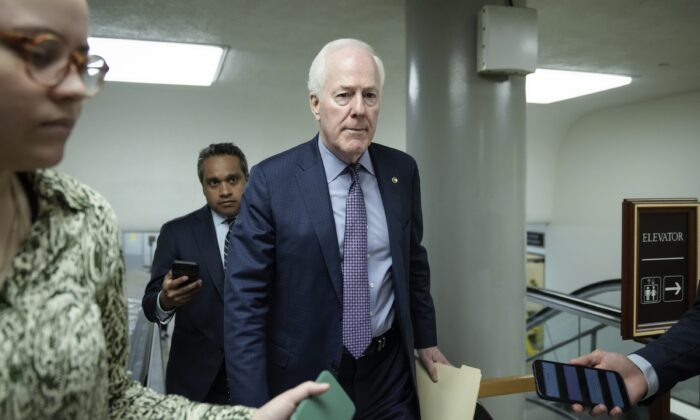 Sen. John Cornyn (R-Texas), the top Republican negotiator for the Senate’s newly unveiled gun control bill, has said he will not take part in a new round of gun control talks concerning proposals aimed at limiting access to certain rifles or expanding background checks.

The lawmaker was asked by reporters on July 12 whether Republicans would negotiate with Democrats on proposals that would limit the availability of some sporting rifles along with other gun control reforms, to which Cornyn simply replied, “No, we’re done,” according to The Hill.

The GOP lawmaker’s comments came shortly after President Joe Biden on July 11 urged Congress to pass laws implementing a new ban on civilian sporting rifles such as the AR-15, referring to them as “assault weapons,” following the mass shootings in Uvalde, Texas, and Highland Park, Illinois.

“We’re living in a country awash in weapons of war,” Biden said at the White House, seemingly in reference to civilian sporting rifles. “What is the rationale for these weapons outside war zones?”

“I am determined to ban these weapons again and high-capacity magazines that hold 30 rounds and let mass shooters fire hundreds of bullets in a matter of minutes,” he said. “I’m not going to stop until we do it.”

Biden also touted the Safer Communities Act passed in June which includes federal funding to enforce red flag laws and enhances background checks for gun buyers between the ages of 18 and 21.

It also makes obtaining guns through so-called “straw purchases”—in which an individual agrees to buy a firearm for someone else who is banned from possessing one—a federal offense and prohibits individuals from obtaining or possessing a firearm for at least five years if they’ve been convicted of a misdemeanor crime or domestic violence in a relationship.

The National Rifle Association has taken aim at the act, stating on Twitter that it is simply a “gun control bill,” adding that “it does little to truly address violent crime while opening the door to unnecessary burdens on the exercise of Second Amendment freedom by law-abiding gun owners.”

Cornyn said on July 12 that he has not had any contact from Democratic senators regarding a new round of talks over legislation.

“It seemed to me to be yesterday the president talked about everything that they wanted but they didn’t get in the bill,” Cornyn said of Biden. “But the sort of things he was calling for don’t have support in the Senate or in the Congress on a bipartisan basis. In other words, they can’t get done.”

Meanwhile, the aftermath of the May 24 mass shooting in Uvalde, Texas, is still being felt, with family members and friends of the 21 victims demanding to know why it took law enforcement officers 77 minutes to enter the unlocked classroom at Robb Elementary School and kill the gunman, Salvador Ramos.

Parents have reportedly asked to see police body camera footage and listen to the 911 calls made on the day of the shooting, but those pleas have allegedly gone unanswered.