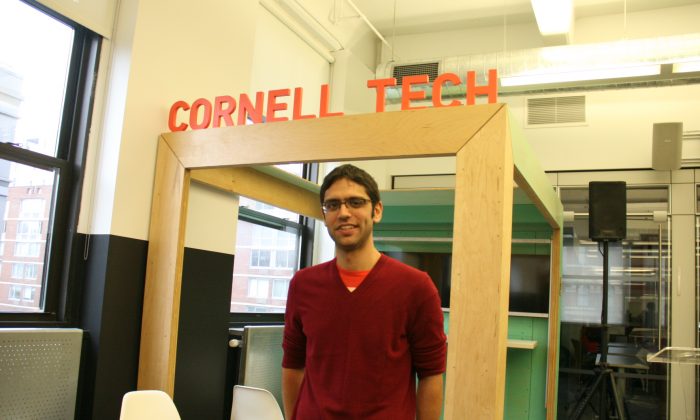 Cornell Tech to Marry AOL in a Gigantic Technology Splash

NEW YORK—Cornell Tech plans to up its tech game. Rather than just being known for its technology, the school wants to add design and business to its repertoire, said its dean, Dan Huttenlocher.

And rather than sticking to the usual chemical droppers and Bunsen burners, the new laboratory the administrators want to create will document “the traces of human interactions,” said Huttenlocher.

Knowing the resource limitations that lie down that path, they’ve brokered a partnership with AOL to build their new lab.

Nicknamed ConnX, the Connected Experiences laboratory will be funded by AOL and located on Roosevelt Island, where a new school campus is being built, and in Israel, at the Technion Institute.

AOL’s contribution to those endeavors has yet to be disclosed.

Currently, Cornell University’s Manhattan campus for graduate students is hosted in the Google building in Chelsea on the third, eighth, and fifteenth floors. Its new campus on Roosevelt Island is slated for completion in the next two decades over the ruins of what was once Goldwater Memorial Hospital.

The school is already avant-garde: there are no walls, leaving students and faculty free to communicate in an open space.

AOL will be providing the university with data to develop into digital technology and improve the human experience. They’re also looking to recruit students into a fellowship program and for possible future employment.

How things will actually play out is still uncertain.

“I’m excited to see how it works out, on the ground,” said Nir Grinberg, 31, a computer science Ph.D. candidate and the second graduate student Cornell Tech’s ever had.

“It’s really prototyping a new type of laboratory for the future,” said Huttenlocher.

And city officials are fans of it. After accepting the school’s proposal last year for building its campus on Roosevelt Island instead of 16 other proposals, officials then came out Wednesday to speak in favor of the new partnership.

Today, New York City is on the cutting edge of technology, but universities like Cornell Tech have a large role to play in attracting young talent.

Tim Armstrong, CEO of AOL, said at Wednesday’s conference that he could recall the days when it was difficult to recruit one Google engineer to move from the West Coast to New York.

Diversity is also part of the equation. One of the prerequisites for the AOL fellowship program is that half those enrolled will be female. The slogan, “We need more women in tech,” was mentioned often in government official speeches, in conjunction with expressions of gratitude toward Cornell Tech for making that possible.

“This laboratory will look very different from the physics and chemistry labs that you might think of,” said Huttenlocher with a smile.

What sort of projects and innovations could come out of the lab was not made clear by faculty, who leave it up to the students running the labs and the ever-changing future to decide.

“It takes time for it to manifest,” said Grinberg, who resides in the Upper West Side. “I’m curious to see it. I just don’t know what form it will take.”