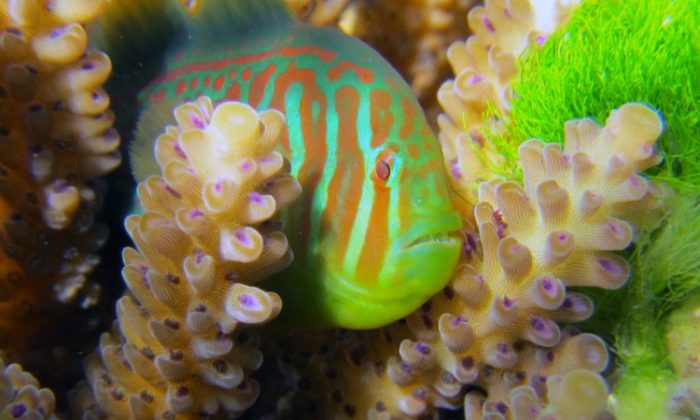 The mutualistic fish Gobidon histrio is shown on the coral Acropora nausuta. The coral is in contact with the allelopathic green alga Chlorodesmis fastigiata. (Georgia Tech Photo: Danielle Dixson)
Science

A species of coral in Fiji calls on goby fish to rescue it when under attack by a toxic seaweed.

Seaweed competes with corals for space, damaging and even killing them through overgrowth. By providing habitat for the gobies, the corals protect the fish from predators, and the fish feed on mucus from the coral and algae at its base, as well as plankton in the water.

In return, the fish reduce seaweed damage to their hosts in a mutualistic symbiotic relationship.

A U.S. research team placed filaments of the toxic alga Chlorodesmis fastigiata onto the coral Acropora nasuta, and observed two species of gobies move toward the site of contact within minutes and begin trimming away the seaweed.

“This species of coral is recruiting inch-long bodyguards,” said study co-author Mark Hay at Georgia Institute of Technology in a press release. “There is a careful and nuanced dance of the odors that makes all this happen.”

Over three days, the fish reduced seaweed cover on their corals by 30 percent and damage dropped by up to 80 percent. Meanwhile, control corals without gobies were badly damaged.

“These little fish would come out and mow the seaweed off so it didn’t touch the coral,” Hay said. “This takes place very rapidly, which means it must be very important to both the coral and the fish. The coral releases a chemical and the fish respond right away.”

The researchers found that the gobies were attracted to water taken from the coral-seaweed contact area and damaged coral.

“The fish are getting protection in a safe place to live and food from the coral,” Hay said. “The coral gets a bodyguard in exchange for a small amount of food.”

“It’s kind of like paying taxes in exchange for police protection.”

The research was published in Science on Nov. 9.