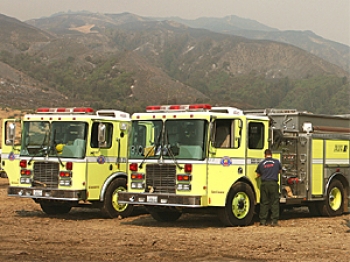 Firefighters take a break as they prepare to tackle the Basin Complex Wildland Fire near Big Sur, California. (Maria Daly/The Epoch Times)
US

By Jane Hudson and Maria Centurion Daly
Print
BIG SUR, Calif.—Local, national, and international crews and officials are working together in the containment efforts for the Basin Complex Wildland Fire.

Located five miles southeast of Big Sur, California in the Los Padres National Forest, the Basin Fire has burned since June 21 due to a lightning strike. 121,782 acres have burned as a result, with an estimated cost to date of $46.6 million, according to the National Interagency Coordination Center, Incident Management Situation Report from July 15.

Lorna Taluban, Chief Public Information Officer from the Monterey County Emergency Operations Center, cited 2,299 fire personnel cooperating to fight the fire, including 46 crews, 178 engines, 19 helicopters, 25 bulldozers and six air tankers. The fire has destroyed 24 residences, 31 other structures, and threatens more than 2000 structures in the area as it moves north and east.

Cody Ratley, 20, from the Bradley Fire Station, commented on how crews worked to gain pace on the fire. “You just do your work, your assignment, and just go all day. We don’t know how long we will stay … Yes, we are tired by the end of the day.”

Steve Mora, 24, from the Gonzalez Forest Fire Station, explained how crews work in 12-hour shifts, day and night. In the morning they receive water and a sack lunch, and anything they may need. The team leader goes out for the day’s objectives and relays the information to the team. When they’re done, they go back to the team leader and receive another assignment. “In a fire this big, there are plenty of things to do. We wake up, do our assignment just like everyone else … and keep going until this thing is cleaned up.”

Mora’s crew has worked on the fire since June 28. “I remember being there when it really took off.”

They did structure protection near Ventana, cutting line and doing hose lays. “Luckily none of our team has been injured. We have been blessed in that. It’s a big plus when everyone goes home safe.”

They swapped stories with crews from Minnesota, Idaho, Oregon, and Montana. “Hey, how do you guys fight fires over there; what kind of fires do you have …” The exchange gives everyone ideas for how to better counter future fires.

The National Interagency Fire Center (NIFC) reports “nearly 45 fire specialists from Australia and New Zealand are in training … to prepare for fire assignments throughout California. Fourteen firefighters from Canada were ordered through NIFC by FEMA and deployed in California. Two highly skilled Canadian firefighting crews are also assigned to fires in northern California.”

Justin Scribner, Public Information Officer at Los Padres Fire Center Base Camp, is a firefighter working from the information center. Bulldozers and hand crew cut lines to prevent the fire from spreading to other areas. The terrain makes access difficult, so “they cannot get fire engines close to the cut lines and areas where they need them—a lot of it is hiking in. A lot of the firefighters stay at base camp, in setup tents, and… sleeping trailers. Some stay as far as Monterey and some in Big Sur.”

“Highway 1 has been closed and that has a big impact on Big Sur, a community that is based on Highway 1 with stores and restaurants that have been impacted due to the closure,” Scribner explained.

“Remember we are stretched thin due to all the fires that have broken in California, and just be patient with the crews. We do the best we can with as many people on the fire lines as we can at a time.”

Garrett Sanders, a Sergeant with the Monterey County Sheriff’s office, has worked with the office for 13 years in Monterey, and helped with evacuations in the Big Sur area.

“Once the fire commander decides that a fire is a threat, he comes to the sheriff’s office and asks us to get people ready to evacuate. We have a plan to go to every residence, knock on every door, and talk to everyone.

“Sometimes people don’t want to leave … we cannot force them.

“A lot of people opted to stay and decide when it was time to leave on their own. When they saw the fire was coming too close, they left. Some of those residences were burnt. So far, no casualties.”

Firefighter Steve Mora summed it up, “It boosts morale to see people come up and say thank you. But, in the end we are here, like anyone else, doing the job we like to do and doing the job we are asked to do.