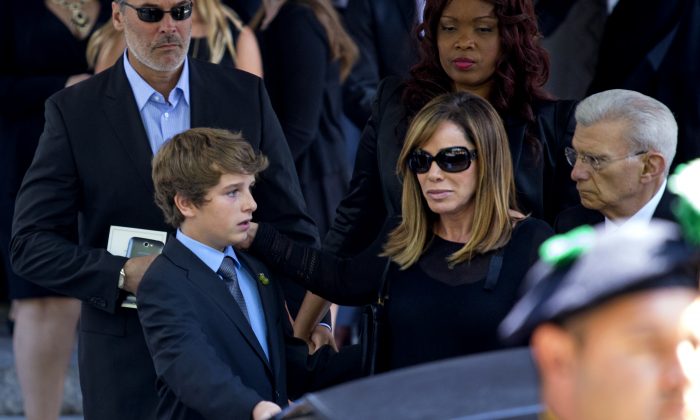 Melissa Rivers and her son Cooper Endicott walk to a waiting car after the funeral service for comedian Joan Rivers at Temple Emanu-El in New York Sunday, Sept. 7, 2014. Rivers died Thursday at 81. (AP Photo/Craig Ruttle)
US

Cooper Endicott, the grandson of Joan Rivers, attended the legend’s funeral over the weekend with his mother Melissa Rivers.

Endicott and and Rivers were among a star-studded crowd at the Templa Emanu-El in New York City.

Melissa gave a tribute to Joan, speaking about how she respected her mother, who died Thursday at 81, and appreciated everyone’s support.

Cooper and Melissa both appeared after the funeral, holding hands as they exited the building.

The somber mother and son made their way into a waiting limousine. Neither spoke to reporters.

Melissa and john were married in 1998 and divorced in 2003. Cooper still spends time with his father. For instance, he was with him for a while while Melissa was with her mother in the hospital.

Melissa, talking about her son to the Daily Mail in 2011, said Edgar’s suicide still has a deep effect on her. “It hits me when I look at Cooper, because Dad’s not around to enjoy his grandson. Cooper knows my dad isn’t here, and one day I’ll talk to him about it, but there’s no need for a ten-year-old to know about these things.”

She added about Cooper: “My son Cooper has just turned ten and the sarcasm fairy has already started to take up residence inside his body. Not only am I living with my mother – again! – but I’ve also got her mini-me to contend with.”

Cooper is known to many for appearing on Melissa and Joan’s reality television show, and Ok Magazine told Melissa that Cooper “might be the most normal child on reality TV.”