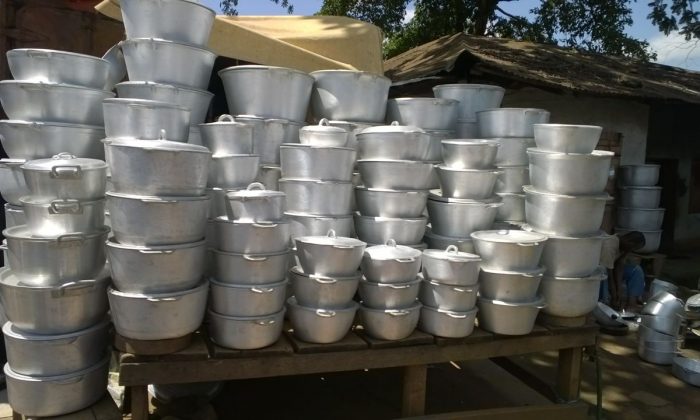 A file photo of aluminum pots made from scrap metal, in a market in Cameroon, Africa. (Courtesy of Occupational Knowledge International)
Environment

Aluminum cookware made from scrap metal is widely used throughout the developing world. While the production of this cookware is an important source of income for local artisans—and in some cases has been supported by international donors as a way to promote recycling and entrepreneurship in the developing world—a recent study found that the lead released into food from cooking with these pots could be contributing to persistently high blood lead levels in Africa and Asia.

Researchers at Ashland University in Ohio and the nonprofit Occupational Knowledge International examined 42 pots from 10 developing countries, and found that more than one-third posed a lead exposure risk. The highest level was in Vietnam, where one pot released 2,800 times more lead than California’s maximum allowable dose level of 0.5 micrograms per day.

The U.S. Centers for Disease Control (CDC) is considering a recommendation to lower the blood lead “level of concern” for children from 5 to 3.5 micrograms per deciliter, highlighting the hazard of even low levels of lead exposure. Lead exposure can cause brain damage and lowered IQ levels in children, as well as other adverse health effects.

Arsenic, aluminum, and cadmium were also released in the process of cooking, the study found. On average, the levels of aluminum released were six times greater than World Health Organization dietary guidelines. Aluminum is suspected of contributing to neurodegenerative diseases, and cadmium is linked to kidney damage, cancer, and other health problems. Significant concentrations of cadmium were released from 30 percent of the pots.

These pots are so ubiquitous and ingrained into the culture in places like West Africa that they’re even sold in African stores in the United States, commented one of the study authors, Perry Gottesfeld, via email. “They are really common and, to many, [are] cultural cookware used for certain kinds of foods.”

The Maliba African Market in Harlem, New York, sells the pots. A clerk who answered the phone there was aware that the pots release lead. But he said they fill the pots with water to test them before sale. He did not elaborate on how this test works precisely and declined to comment further.

Emily Lynn Osborn, a historian at the University of Chicago, has studied the role these pots have played in African culture. She found they were first made in Senegal after World War II, when aluminum had become popular in making aircraft. Local lore holds that the first of these pots was made from a scrapped aircraft.

Now, computer and auto parts, cans, and all kinds of industrial debris are used. Osborn apprenticed with an aluminum caster in Kankan, Guinea, in 2005 to 2006, as part of her studies.

Is America Solving, or Just Exporting, Its Environmental Problems?

“People were not that concerned about toxins, although some were, usually in places like Senegal where there had been some NGO involvement,” she told Epoch Times via email. “Casters everywhere did worry about other hazards associated with their work—burns and explosions that come with melting and manipulating the molten metal, for example.”

A typical workshop where these pots are made might consist of a cement-lined barrel that serves as a furnace, a few planks of wood, and sand to make the molds. The craft provides work for those without electricity or the capital for other enterprises.

The problem of lead came to light in 2014, in an earlier study by the same authors. That study focused only on Cameroon. The recent study, which will appear in the February edition of the journal Science of the Total Environment, expanded to several other countries, confirming the scope of the problem.

Osborn said: “People make use of all sorts of aluminum material in making pots, and toxins become part of the process. It is another hazard for poor people in the developing world, a cost of creatively making do.”

The researchers tested some coatings that prevent leaching. While this helped, some of the coated pots still released close to 20 micrograms of lead per serving, which is about five times the U.S. Environmental Protection Agency action level.

The coatings would increase the cost of making the pots, and make it harder for the small-scale craftsmen to produce. The researchers also noted potential cultural resistance to changing the pots: “In many cultures, selection of cookware is closely linked to cooking practices that may not be readily transferred to coated or anodized aluminum cookware. In West Africa, for example, artisanal aluminum cookware is ubiquitous in homes, food stalls, and institutional applications. The lack of cultural acceptance to alter the product in this way may preclude a simple fix.”

Historian Emily Osborn speaks about her time in West Africa, studying the making of aluminum cookware: