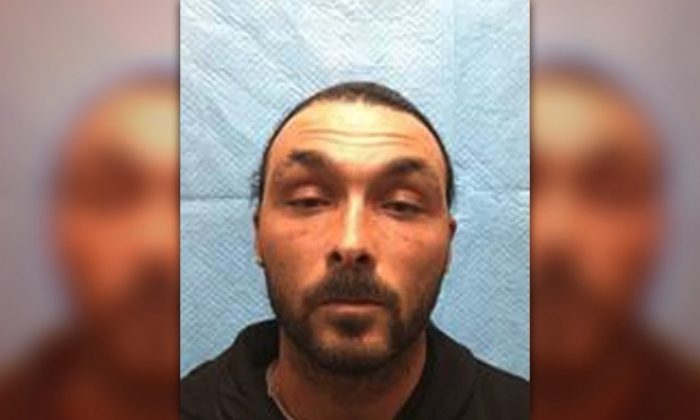 Christopher Dandeneau, 33, is seen in a photo released by the police on May 13, 2019. (Rialto Police Department)
Crime and Incidents

A registered sex offender in California has been accused of sexually assaulting four women along a popular running trail all while wearing a GPS ankle monitor.

Police believe 33-year-old Christopher Dandeneau, who due to prior convictions was on the sex offender registry and had been ordered to wear an electronic monitor, carried out at least four attacks on women along the Pacific Electric Trail in Rialto.

“The suspect held the female at knifepoint and attempted to steal her cellphone then attempted to sexually assault her,” Lt. Cameron Nelson of the Rialto Police Department told KABC.

The attacks took place between May 2 and May 6.

“We launched an extensive investigation that had undercover officers on the trail day and night time hours to make sure those citizens were safe, but also give us the best opportunity at catching him,” Nelson said, KABC reported.

Police cited by The San Bernardino Sun said the suspect would hold the victims at knifepoint, try to force victims to hand over their cellphones, and then either attempt or carry out a sexual assault.

A tip from a resident who saw a sketch and surveillance video was instrumental in helping police find and arrest the suspect.

“They were able to find surveillance video. They went out to multiple residents, hundreds of residents, apartment complexes to see if anyone saw this suspect, and we actually did get a tip from the community that led us to the arrest,” Nelson said, KABC reported.

A knife was found at Dandeneau’s home, which investigators believe was used in the attacks.

Police also said they discovered he had been wearing a tracking bracelet on his ankle the entire time. Dandeneau had prior convictions for sexual battery and indecent exposure in San Bernardino County in 2010, according to court records cited by The Sun.

The suspect was arrested on May 10, according to KTLA.

“Once we made the arrest, we realized he was on a GPS monitor tracking system. That tracking system shows him at the crime scenes during the times of the attack and his path away from those scenes,” Nelson said, KABC reported.

The suspect is being held at West Valley Detention Center in Rancho Cucamonga without bail.

The Rialto Police Department has asked other potential victims to come forward and provide information in the investigation, which is ongoing.

Due to prior convictions, Dandeneau faces a possible life sentence.