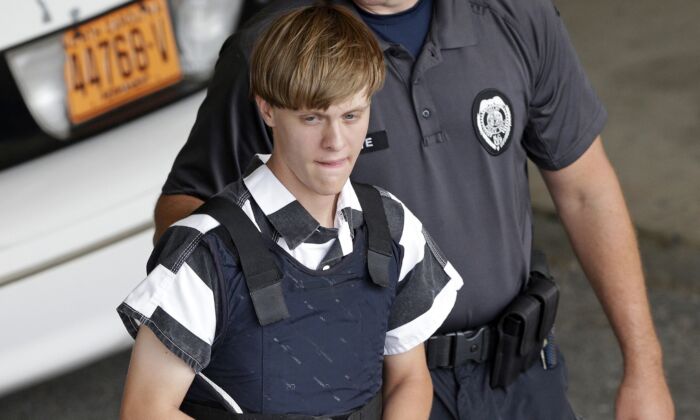 The U.S. Department of Justice (DOJ) asked the Supreme Court to refuse to hear a death-penalty appeal by an avowed white supremacist who gunned down nine people at a black church in South Carolina in 2015 in an effort to spark a race war.

Dylann Storm Roof, now 28, is the first individual in the United States ever to be sentenced to death for a federal hate crime.

Roof, who is now on federal death row in Terre Haute, Indiana, fired his lawyers during the penalty phase of his trial and represented himself in order to prevent the presentation of evidence showing he was mentally ill, even though such mitigating evidence may have helped him avoid execution.

Evidence as to his mental health, in this case, would undermine the so-called message that he was trying to send by committing the crimes, he has said.

Last year, Roof’s attorneys told the U.S. Court of Appeals for the 4th Circuit that that court should set aside the convictions and death sentence or order a “proper competency evaluation,” the Associated Press reported at the time.

In court papers, Roof’s attorneys said that the federal trial “that resulted in his death sentence departed so far from the standard required when the government seeks the ultimate price that it cannot be affirmed.”

Roof should not have been allowed to represent himself because he is mentally ill, they argued.

The lawyers argued that U.S. District Judge Richard Gergel, an Obama appointee, erred in finding Roof competent to stand trial even though “every defense expert agreed Roof suffered a delusional belief he would be rescued by the victors of a race-war, which prevented him from understanding the threat of execution was real.”

In his petition (pdf) filed Feb. 24 in Roof v. the United States (court file 21-7234), Roof asks the Supreme Court, “when a competent capital defendant and his counsel disagree on whether to present mitigating evidence depicting him as mentally ill, who gets the final say?”

Roof also challenges the constitutionality of the federal civil rights statutes under which he was convicted.

But U.S. Solicitor General Elizabeth Prelogar argued in a 39-page brief (pdf) filed with the court on Aug. 31, that the high court should refuse to entertain Roof’s petition.

Roof’s story goes back to June 17, 2015, when, after posting a manifesto of his racist beliefs online, he went to Emanuel African Methodist Episcopal Church in Charleston, South Carolina, where a Bible study session was in progress.

The parishioners welcomed Roof who sat with them for about 45 minutes. He then began firing on the church attendees with a handgun about 74 times.

He approached one woman and asked her if he had shot her yet. She answered in the negative and he replied, “I’m not going to. I’m going to leave you here to tell the story.”

Seven people died at the scene and two more succumbed to their injuries soon after, according to the government’s brief.

Roof was apprehended by police the following morning in North Carolina.

He told FBI agents that he was a “white nationalist” and that he carried out his shooting spree because “black people are killing white people every day” and “rap[ing] white women.” Roof said he was attempting to agitate relations between the races in the hope of causing a race war.

Roof was indicted by a federal grand jury for racially motivated hate crimes resulting in death, along with various other charges.

The government announced it would pursue the death penalty and rejected Roof’s offer to plead guilty in exchange for life imprisonment.

During a competency evaluation, Roof told a court-appointed examiner that it was his goal to stay alive as long as possible by creating appellate issues at trial that would help to “prolong” his life.

But he became upset when his attorneys told him they planned to call an autism expert to the witness stand during the trial’s penalty phase.

Roof told the prosecutors in a letter “what my lawyers are planning to say in my defense is a lie and will be said without my consent or permission.”

Roof told the court he would “rather die than be labeled autistic” and that mental-health evidence “discredits the reason why [he] did the crime.”

The DOJ argues that the 4th Circuit correctly found that Roof was not entitled to enjoy the assistance of counsel while directing presentation of mitigating evidence, Prelogar’s brief states.

“Although a criminal defendant who chooses to be represented by counsel retains ‘the ultimate authority to make certain fundamental decisions regarding the case’—namely, whether to plead guilty or otherwise concede guilt, waive a jury trial, testify in his own behalf, or appeal—he does not have a more general right to supersede counsel’s judgment on how to present a defense,” the DOJ said.