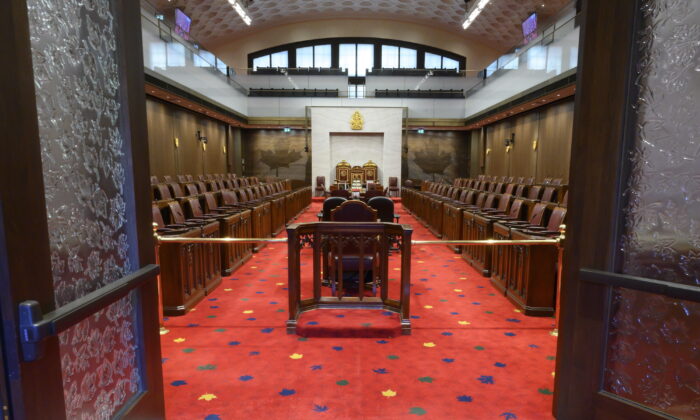 The Senate chamber in Ottawa in a file photo. (The Canadian Press/Sean Kilpatrick)
Canada

The Liberals’ conversion therapy bill was fast-tracked in the Senate on Dec. 7, avoiding amendments, debate, and committee study, just as it did in the House of Commons on Dec. 1.

In the previous Parliament, some Conservative MPs argued for amendments to a similar bill that would provide better protection for parents, school guidance counsellors, and clergy. Sixty-two Tory MPs ended up voting against that legislation.

The Liberals then introduced a revamped conversion therapy bill on Dec. 6, some two months following the Sept. 20 federal election. While the previous bill banned conversion therapy only for children, the new bill bans the practice for adults as well, while also clarifying that conversations about sexual orientation between parents and children would not be criminalized.

However, the changes incorporated into Bill C-4 never had a chance to be debated, as the Conservatives introduced a motion to fast-track the bill in both the House and the Senate.

Campaign Life Coalition president Jeff Gunnarson told The Epoch Times that he wasn’t impressed with the rapid passage of the bill, or what followed.

“They had a standing ovation for each other and patted each other on the back and hugged each other,” Gunnarson said, referring to Conservative MPs in the House on Dec. 1.

“There were six or seven or eight Conservatives—I don’t know if there were any other from any other parties—sitting down not applauding, but they did not say no.”

Campaign Life Coalition had gathered over 20,000 names in an online petition opposed to the bill. The petition states: “I do not believe anyone should go to jail for helping someone overcome unwanted same-sex attractions or gender dysphoria. It is absurd and totalitarian for any government to attempt to do so. It is also a violation of the fundamental human rights of those who want to change.”

Gunnarson believes that without amendments, the long-term legacy of Bill C-4 will be more suicides and family breakdown in a “sterile society,” where parents are afraid to talk to their children on these issues lest they “get a knock on the door.”

In a Campaign Life Coalition press release on Dec. 7, immediately following the swift passage of the bill in the Senate, Gunnarson outlined some of his concerns with Bill C-4.

“The bill insanely calls biblical-based anthropology in which God creates humans as ‘male and female’ a ‘myth,’” he said.

Gunnarson outlines a scenario to express his concern with the bill.

“Six-year-old Johnny’s progressive teacher indoctrinates the classroom with a series of gender identity lessons. One day soon afterward, little Johnny comes home and tells his parents he wants to begin identifying as a ‘girl’ and start wearing a dress and make-up to school. They gently say ‘no’ and affirm him in his biological, God-given sex. The bill’s definition of ‘Conversion Therapy’ is broad enough to include exactly this kind of scenario. Parents can now face five years in prison for this common-sense parenting,” he said.

Real Women of Canada, in a press release the same day criticizing the rapid passage of the bill without debate, describes the legislation as “intolerant, authoritarian, and discriminatory.”

“The tragic effect of Bill C-4 is that some real persons struggle with emotional issues and have serious questions that should be addressed. Instead, under this legislation, they may legally receive advice or counselling that leads them in only one direction and to only one conclusion,” the release says.

A Nanos national survey in March showed that 78 percent of Canadians agree and 13 percent somewhat agree that adults should have the right to get the sexuality counselling of their choice regardless of their sexual orientation or gender identity.