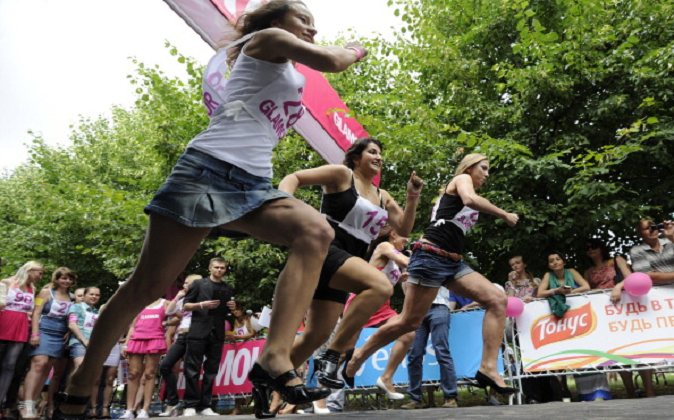 (via Getty Image*)
Good to Know

Maybe you have heard of extreme sports, but have you heard of any of these annual competitions? Check them out.

Competing in heels with a minimum of 9 inches, women in Ukraine compete to win a grand prize: a new car. What’s crazier than all of this is that men can compete too! Well, those men better start training, because these women have been wearing their stilettos practically their whole lives.

Believe it or not, there is a nettle-eating competition held in the U.K. every year. In case you don’t know what nettle is, it is a stinging weed that has little hairs that turn to needles. They then inject various irritating chemicals into your skin. Its so crazy that these people are actually eating it. Don’t worry, they are totally safe to eat, with amazing health benefits, but they sure will irritate your mouth. The grand prize is: excess beer.

You have never seen beards this crazy until you’ve seen this competition! Held in various cities, men who are dedicated to growing their facial hair all come forth to join the World Beard and Moustache Contest. There are all kinds of facial hair types including garibaldi, goatee, partial beard, mustache, etc. In the 2012 Las Vegas championships, the winner got $1000 in courtesy of Bluebeards Original.

Everyone says that when you can’t sleep, count sheep. Well, this is a real live competition held in Australia. Many sheep dash past competitors in their attempt to accurately count all the sheep. Hopefully they won’t fall asleep in the process.

Probably one of the sweetest running competitions you can ever run in. This race takes place in many cities all over the USA. Over 40K people compete in each race, running for 5 kilometers, and it has been quite successful over the years. At the end of the race, each person gets their own sample chocolate fondue with many items to dip in along with a cup of hot cocoa. Its no wonder why people would want to compete in this race.

Would you take part in any of these competitions?