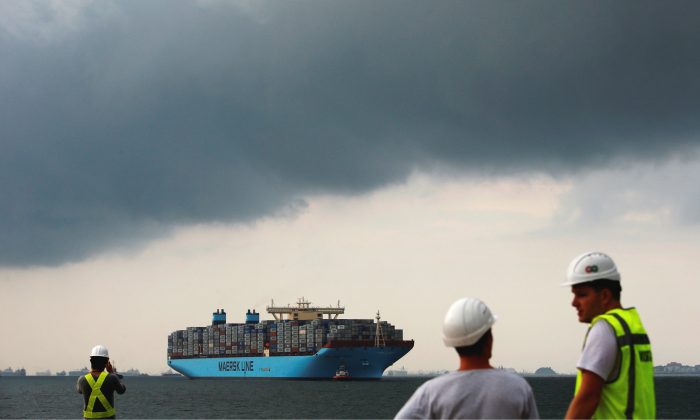 The MV Maersk Mc-Kinney Moller is led by pilot ships as it makes a port of call at a PSA International port terminal in Singapore, Sept. 27, 2013. (REUTERS/Edgar Su/File Photo)
International

Container Shipping Lines Ordered to Testify in US Sector Probe

LONDON/SINGAPORE—The U.S. Justice Department has ordered top executives from several container shipping lines to testify in an antitrust investigation over practices by an industry that is the backbone of world trade, the companies said on Wednesday.

The world’s biggest container group, Denmark’s A.P. Moller-Maersk, together with second largest line MSC of Switzerland, Germany’s Hapag Lloyd, Taiwan-based Evergreen and Hong Kong-based Orient Overseas Container Line (OOCL) said their executives were among those who had been subpoenaed.

None offered details on what exactly was being sought by the U.S. authorities, although OOCL said its subpoena called for the production of documents.

The subpoenas were issued during a meeting of top container shipping executives last week in San Francisco. They are members of the International Council of Containership Operators, commonly known as the Box Club.

“We can confirm that we conducted an operation,” an FBI spokesman in San Francisco told Reuters on Wednesday. “It is part of an ongoing investigation and we are unable to release any additional details at this point.”

Container lines, which transport everything from TVs to bananas, have tried to save money by setting up alliances to pool their ships’ sailing schedules and port calls. Critics say this can lead to reduced services and increased prices for customers.

The U.S. inquiry follows ones by other jurisdictions including South Africa and the European Union. These have examined pricing practices by the sector, which is still struggling with its worst slump and has seen companies going to the wall due to a glut of ships and sluggish global economic growth.

Such investigations could result in large fines at a time when the firms are still struggling to cut costs.

In July last year, EU anti-trust regulators accepted an offer from Maersk and 13 competitors to change their pricing practices in order to stave off possible fines.

Previous inquiries by the U.S. Justice Department had looked into price fixing within the shipping industry, which has resulted in indictments of various executives.

Sydbank analyst Morten Imsgard said such investigations had become “almost everyday life” in the shipping industry and lines had to take them seriously, given the risk of fines.

“What can be severe is that every time authorities dig into this it might result in tighter regulation,” Imsgard said. “The industry needs co-operation and alliances. So, if a tightening of the possibilities to form partnerships across the industry makes it harder to consolidate, it will be more difficult to get a more profitable industry.”

In September South African authorities raided some of the world’s biggest container lines on suspicion of colluding to inflate rates on shipping routes.

The United States is concerned that the proposed alliances of several major companies, covering about 45 percent of all global shipping capacity, could lead to anti-competitive behavior.

This could slow global trade as about 90 percent of the world’s traded goods by volume and over 60 percent by value—$4 trillion—is transported by sea on container ships. The rest is on other vessels such as oil or gas tankers.

Spokesmen for Maersk Line and Hapag Lloyd said that the subpoenas did not set out any specific allegations, adding that the companies would fully cooperate with authorities.

MSC said several lines including itself received subpoenas last week from the Department of Justice, declining further comment at this stage “due to the ongoing nature of the investigation”.

OOCL and Evergreen also confirmed they were involved.

“OOCL has received a subpoena from the Department of Justice Antitrust Division calling for the production of documents. OOCL intends to comply fully with the subpoena,” said Stephen Ng, OOCL Director of Trades.

The Evergreen spokesman said: “We are cooperating with the authorities in this matter. Evergreen’s policy is to conduct business in compliance with applicable competition laws.”

The Hapag Lloyd spokesman said its planned merger with United Arab Shipping Company would not be affected by the inquiry.

Alliances in the Spotlight

The Justice Department has raised concerns over possible anti-competitive behavior by container shippers with the U.S. Federal Maritime Commission (FMC) after shippers sought approval to form the Ocean and THE alliances.

In a letter to the FMC in September, Renata Hesse, acting assistant attorney general in the Justice Department’s antitrust division, urged it to prohibit or insist on changes to the Ocean Alliance agreement.

“The parties to the proposed agreement are seeking to undertake joint activities that are likely to reduce competition and also may be inconsistent” with the U.S. shipping act, Hesse said in the letter, which was published on the Justice Department website.

The Hong Kong Shippers’ Council, which represents manufacturers and exporters, said it welcomed the inquiry. “We look forward to hearing their result,” chairman Willy Lin said.