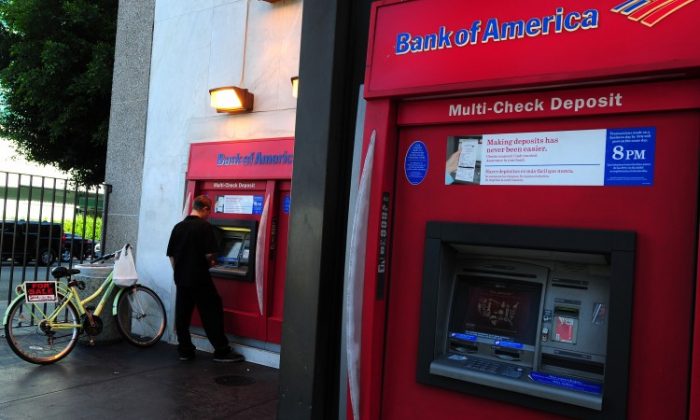 A man uses an automated teller machine (ATM) in front of a branch of Bank of America in Hollywood, California in August 2011. (Frederic J. Brown/AFP/Getty Images)
Business

A survey conducted by market research firm J.D. Power and Associates found that new customers at small banks and credit unions climbed 2.2 percent in 2012 to 10.3 percent. And most of those new customers came at the expense of large, regional, and mid-size banking firms.

Among the larger banks, defection rates total around 10 percent, J.D. Power found. The rate of defection at smaller banks and credit unions was a miniscule 0.9 percent.

For example, Bank of America Corp. last fall planned to introduce a new monthly fee of $5 for customers who used their debit cards to make purchases. After the announcement, more than 300,000 customers signed an online petition against the fee, and tens of thousands proceeded to close their accounts.

Bank of America eventually backed off charging the fee last November. But the bank isn’t the first or the only bank to increase its fees, as other executives have cited new regulations and declining profits as the reason to pass on additional costs.

“Consider changing banks if you are not satisfied with the service you currently receive,” stated a J.D. Power blog post that assists consumers looking to switch. “Switching banks may be easier than you think, and most banks have staff dedicated to supporting new customers that have recently switched.”

The survey was conducted in Nov. and Dec. 2011, and interviewed 5,000 customers who had recently switched banks over the last 12 months.