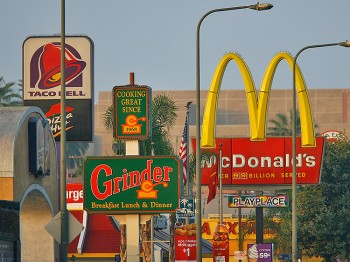 LAGGIN' IT: Signs for fast-food restaurants line the streets in the Figueroa Corridor area in Los Angeles, Calif. A recent survey says the nation's biggest chains, such as McDonald's and Taco Bell, lag behind smaller rivals in taste. (David McNew/Getty Images)
Business & Economy

According to Consumer Reports’ survey, released on Thursday, the nation’s biggest chains such as McDonald’s, KFC, and Burger King lag behind smaller rivals in taste, consumers say.

In-N-Out Burger, a regional chain based on the West Coast, scored highest among fast-food hamburgers restaurants, while Chipotle Mexican Grill—which ironically used to be owned by McDonald’s—came in No. 1 in the Mexican category, and Chick-fil-A was ranked first among fried chicken restaurant chains.

"Chains like McDonald’s and Taco Bell boast supersized values, but consumers don’t necessarily think they offer much bang for the buck," noted Tod Marks, senior projects editor at Consumer Reports, in a statement.

“Fifty four percent of our subscribers cited low prices as a reason for picking a particular fast-food restaurant."

In-N-Out was ranked No. 1 among all chains in food, service, value, and speed. In-N-Out is a privately owned company based in Irvine, Calif., and runs around 250 locations in California, Nevada, and Arizona.

Due to the nation’s economic climate, many companies reported that their main focus was value and low prices.

Taco Bell was recently targeted for making false claims about the ingredients in the beef used in its tacos, but the lawsuit against the company has since been withdrawn. Taco Bell has launched an aggressive campaign called “Talk” to defend the percentage of beef in its beef products, and has reiterated its focus on value for consumers.

Besides taste, retail chains are also looking to differentiate through other means. Domino’s Pizza, a national pizza delivery chain, recently announced iPhone and iPad apps to give users the ability to order via mobile devices. “We are committed to making sure we’re connecting with our customers wherever they are,” said Domino’s Chief Information Officer Chris McGlothlin.