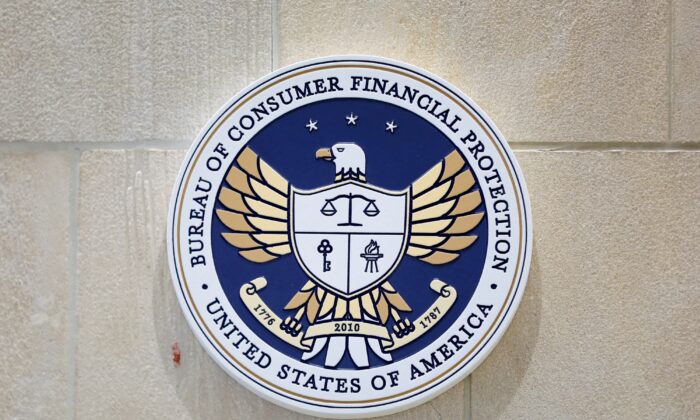 The seal of the Consumer Financial Protection Bureau (CFPB) is seen at their headquarters in Washington on May 14, 2021. (Andrew Kelly/Reuters)
Economic Policies

The Consumer Finance Protection Bureau (CFPB) says banks have grown reliant on overdraft fees, which contributed $15 billion of revenue in 2019, and is considering “regulatory interventions” to increase transparency and competition.

Under its new director, Rohit Chopra, who took up his position last October, the CFPB is targeting bank fees that are particularly unpopular with consumers, such as overdraft charges and non-sufficient funds fees, signaling an intent to whittle away at the fees it says harm consumers and pad banks’ profits.

“In many cases, junk fees act like penalties, like with non-sufficient funds and credit card late fees, rather than compensation for a legitimate service,” Chopra said.

Banks may charge customers for services that require the bank to take on extra risk, Chopra said, but “many complain that these fees are far higher than the service is really worth.”

In recent months, banks like JPMorgan Chase & Co., Bank of America and Capital One Financial have made a variety of changes to existing overdraft policies, ranging from eliminating overdrafts altogether to allowing customers more time to bring their accounts above zero to reducing the fee the bank charges from $35–$10.

“This is progress, but it is not enough,” Chopra said.

The Consumer Bankers Association, an industry group, shot back at the CFPB’s claims, saying overdraft fees contributed less than 2 percent of bank revenues in 2019, and that banks disclose the terms of those and other fees to consumers.

The banking industry is well-regulated, supervised and competitive, said the group’s president and chief executive, Richard Hunt. “The (CFPB) should be focused on seeking feedback from and working in tandem with banks … to recognize the value these products and services have in the lives of the people we are all working to serve.”