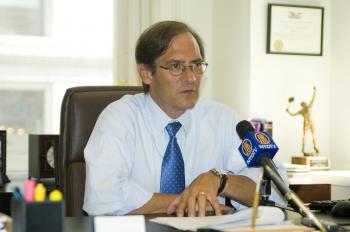 POSSIBLE EXPULSION: Attorney Robert Gottlieb discusses legalities surrounding the attacks against Falun Gong practitioners that began on May 17, alleged to have been instigated by Chinese Consul General Peng Keyu. Peng could be expelled from the country if found guilty.(Kannan Sankaran/The Epoch Times)
US

Joshua Philipp
Joshua Philipp is an award-winning investigative reporter with The Epoch Times and host of EpochTV's "Crossroads" program. He is a recognized expert on unrestricted warfare, asymmetrical hybrid warfare, subversion, and historical perspectives on today’s issues. His 10-plus years of research and investigations on the Chinese Communist Party, subversion, and related topics give him unique insight into the global threat and political landscape.
View profile
Follow
biggersmaller
Print
NEW YORK—Chinese Consul General Peng Keyu could be expelled from the U.S. if allegations that he encouraged attacks against Falun Gong practitioners are found to be true, according to New York attorney Robert Gottlieb.

During an interview in his office near Wall Street, Gottlieb explained the legalities surrounding the possible expulsion of the consul general, as well as charges that others involved could face. Gottlieb's law office has been following the case of the Flushing attacks.

Shortly after the assault against Falun Gong practitioners had begun in Flushing on May 17, an investigative call was made to the office of Chinese Consul General Peng Keyu by the World Organization to Investigate the Persecution of Falun Gong (WOIPFG).

During the call, Peng was recorded admitting that he had met with and encouraged those who had attacked the Falun Gong practitioners. “It’s clear that the consul general from China, here in New York, is a part of a group that is conspiring to intentionally assault Falun Gong adherents,” said Gottlieb. “It’s very clear that the consul general is an active participant in inciting these criminal acts.”

According to Gottlieb, Peng could be expelled from the United States if it is found that he had encouraged the attackers, regardless of diplomatic immunity. “Immunity, nevertheless, does not give foreign nationals the right, the power, the protection against conspiring with individuals, to violate the civil rights of people here in the United States as this individual, the consul general, clearly has done,” said Gottlieb. “It does not give them the protection from being thrown out of this country.”

“This isn’t just speculation. If that in fact can be shown, the State Department, the United States, would be absolutely entitled to move to expel that particular diplomat,” said Gottlieb.

Supporting the potential case against Peng, Gottlieb explained that such cases have occurred previously in U.S. courts. “Certainly, there are a number of cases over the years where diplomats have been found to have violated criminal laws here in the United States, and even though prosecutors could not prosecute them criminally in the state courts, they have been expelled from the country,” said Gottlieb.

When asked if the recording of Peng, in which he admitted encouraging the attackers, would be enough evidence to expel him from the U.S., Gottlieb explained. “There’s no question,” said Gottlieb. “That tape, which is a vicious signal by a foreign national of conspiring with other individuals to gather together to incite them to go out to beat people up merely for expressing their beliefs, that tape, hearing his words, really leaves no doubt of his complicity and certainly would be enough to have him expelled if the government chooses to do so.”

According to Gottlieb, if Peng is found guilty, others who had conspired with him could also be put on trial. “That’s potential evidence,” said Gottlieb.

“I believe it’s very important that we all proceed based on facts and based on evidence,” said Gottlieb. “There’s no question that the consul general has conspired with individuals to incite violence and to assault. We have that on tape. Anyone else who joined him, similarly, is wrong and if they are not protected by diplomatic immunity should be prosecuted. No question about it.”

In addition to possible connections with Peng, some of the alleged attackers could face hate crime charges. According to Gottlieb, by U.S. law, many of the attacks against Falun Gong in recent months are, by definition, hate crimes. “If your victim is intentionally selected in whole or in part because of their race, color, gender, religion, religious practice, that then is an essential element of a hate crime,” said Gottlieb.

“So why these people were singled out, why they were assaulted, if it can be shown to be because of religion or religious practices, that then complies with the hate law statute,” said Gottlieb. “Then if you’re convicted, in fact your punishment will be more severe.”

One of the alleged attackers, Victor Yao, was arrested after an incident on June 15 in Brooklyn where he allegedly attacked a Falun Gong practitioner with a metal steering wheel lock. The Brooklyn District Attorney (DA) was reported to have made a decision to treat the incident as a hate crime.

Gottlieb said that his office had immediately sent documents about the incident to the Queens County DA in hopes that they would treat similar cases that occurred in Queens with the same level of seriousness. “That is, to treat the attacks on the Falun Gong supporters as hate crimes because the victims were specifically targeted because of their religion and religious practices,” said Gottlieb.