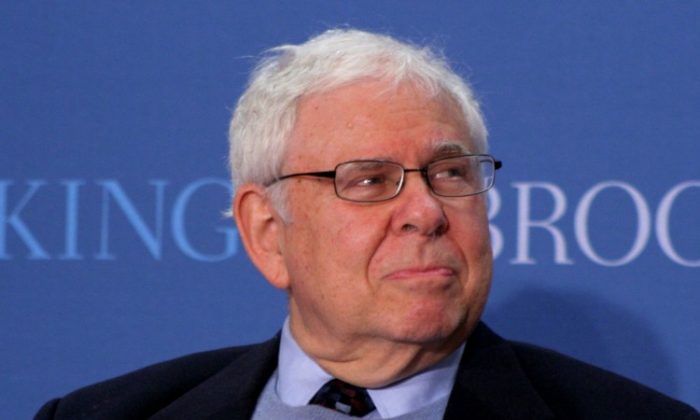 Sanford Levinson, professor at the University of Texas Law School and of government at Texas, believes that institutional structures required by the U.S. Constitution are contributing to the malaise of American politics. (Gary Feuerberg/The Epoch Times)
US

WASHINGTON—The approval rating of the U.S. Congress has fallen to about 10 percent. Gridlock is probably a big reason for the public’s frustration with the federal government. Could the U.S. Constitution, the supreme law of the land, written in 1787, be the reason for the current political dysfunction in American politics?

The 50 state constitutions may also be designed in ways to frustrate efficient governance. Many in California’s political elite say that California, for example, is “ungovernable.” California requires a supermajority—two-thirds vote—for its most basic decisions: to pass the state budget, to raise taxes, and to change education spending.

Sanford Levinson, professor at the University of Texas Law School and of government at Texas, believes that institutional structures required by the U.S. Constitution are contributing to the malaise of American politics, and that a new constitution (or at a minimum, amending this one) with more pure democracy elements would go a long way toward correcting the problem. He is the author of a new book, “Framed: America’s 51 Constitutions and the Crisis of Government” (Oxford University Press, March 2012), which he discussed, March 12, at a forum held at the Brookings Institution.

Dr. Levinson has written four other scholarly books on the American Constitution.

“To what extent in 2012 do we share the assumptions in 1787 that are used to justify the Constitution?” he asks. “Do we share James Madison’s distrust of popular government, which runs through the ‘Federalists Papers,’ and his belief that ideally we will be governed by virtuous elites, which will not be partisan, not be part of a party system, which is a recipe for factions and the disintegration of a democratic republic?”

Levinson’s answer to his question is that, by and large, we don’t in 2012 share this assumption and many other assumptions of the Founding Fathers.

The moderator of the event, William Galston, senior fellow at Brookings, said, “Lincoln advocated reverence for the Constitution as the only bulwark against anarchy and tyranny.”

But Levinson is anything but reverent to the document, attributing the lack of confidence that the people have for the American government in good part to a Constitution out of touch with our times.

The two great compromises made at the constitutional convention in Philadelphia were undemocratic by today’s standards. One compromise made each state entitled to an equal number of senators, two each. This provision gives the state of Wyoming (pop: 564,000) equal representation as California (pop: 37 million) in the U.S. Senate. Levinson said we have had to accept this compromise for 225 years as an “extortionist price exacted by Delaware and other small states in order to get a constitution at all.”

The Articles of Confederation weren’t working and there were genuine fears from foreign powers, and so the compromise over the Senate “was the lesser evil.”

Levinson considers the compromise on slavery, a “rotten compromise,” a pact with the devil, he said. It counted a slave as three-fifths person for purposes of representation in the House of Representatives.

This provision gave slave-holding states disproportionate representation in the House and Electoral College. But the opponents of slavery agreed to it because the country without a constitution would be worse off, Levinson said.

Levinson said he was not bashing the Founding Fathers who were admirable people. But he asks why we don’t stop and ask ourselves whether we accept their views on how society and politics works. If not, is the Constitution serving us well?

No, he says. We are “facing a crisis of governance; our political system is not effectively responding to the exigencies of the business of the day,” he said. He is willing to concede that the Constitution made some important contributions to the development of the country, but he says it is also important to ask: At what cost?

Louis Michael Seidman, professor of constitutional law at Georgetown University and the co-author of a widely used constitutional law casebook, said at the Brookings discussion that he saw “no reason to subordinate our contemporary judgment to people long dead and who have no knowledge of contemporary conditions, and who thought it was perfectly alright to own another human being.”

Donald Horowitz, professor of law at Duke University, said he doubts that the Constitution is the “cause” of our current predicament. He lays the blame squarely on the increased political polarization. He said that the American politics, gerrymandering, for example, creates homogenous constituencies, thereby favoring incumbents. There is no incentive for politicians to move to the center.

Levinson wants to remedy our dysfunctional political system by injecting more democracy. He recognizes the perspective that says that the Founding Fathers created a republic, not a democracy, which is particularly notable in the Senate, and Electoral College. It was to protect us from tyranny—the tyranny of the majority. But he feels that the U.S. Constitution has too many undemocratic elements.

Levinson would change the president’s 4-year term (with re-election) to a 6-year term (no re-election). The president could be terminated in the legislature by a vote of confidence. This is closer to a parliamentary system, which he says is more responsive to the people’s wishes on major questions of war and the like.

Levinson would change the life-tenure of Supreme Court justices to a single 18-year term, which should give enough stability on the court, he says.

Levinson would change the election of the president from the Electoral College to popular vote, so that all states could be involved in the election, not just the swing states as it is now. He would require the winner to have above 50 percent of the vote, which could mean a runoff between the top two finishers.

He deplored the 1968 election of Richard Nixon and the 1992 election of Bill Clinton when each had only 43 percent of the vote. The president needs a majority of the vote to be credible both here and abroad, Levinson says.