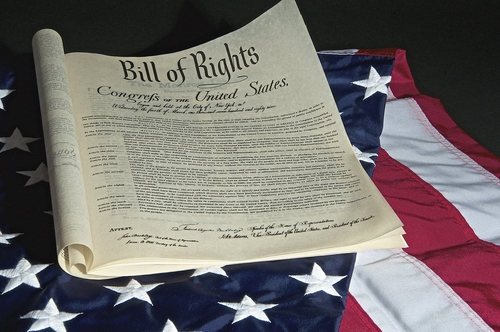 Part 2 of 5 on understanding the Bill of Rights

In honor of U.S. Constitution Day, on Sept. 17, we present a five-part series on the Bill of Rights. It reveals how the first 10 amendments to the Constitution guarantee freedom of speech, religion, and the press, and, in so many other ways, limit the power of the federal government and secure the rights of individuals.

The first 10 amendments to the U.S. Constitution constitute the Bill of Rights. The first eight of those amendments clearly were designed to protect citizens from the type of governmental intrusions that were common under British rule, but the last two are different in nature.

The First Amendment says that “Congress shall make no law respecting an establishment of religion, or prohibiting the free exercise thereof; or abridging the freedom of speech, or of the press; or the right of the people peaceably to assemble, and to petition the government for a redress of grievances.” The British had done all those things.

The Second Amendment protects “the right of the people to keep and bear arms.” It wasn’t about hunting or self-defense. Even before the war, the Brits had begun to confiscate guns.

The Third Amendment prevents the military from quartering soldiers during peacetime “in any house, without the consent of the owner.” During times of war, it could be done only “in a manner to be prescribed by law.” The British had done both of these things.

The Fourth Amendment protects “the right of the people to be secure in their persons, houses, papers, and effects, against unreasonable searches and seizures.” It sets probable cause as the requirement for warrants prior to governmental searches of private property. Colonists really hated the so-called “general warrant” that let British authorities enter homes to check that all merchandise had appropriate tax stamps. This would stop that.

The Fifth Amendment provides for grand jury indictments prior to prosecution, protection against double jeopardy, the right not to incriminate one’s self, due process, and compensation when private property is taken for public use. The British had done all these things.

The Seventh Amendment says that in civil suits involving more than $20, the parties have a right to a jury trial and “no fact tried by a jury, shall be otherwise reexamined in any court of the United States, than according to the rules of the common law.” While federal courts have limited jurisdiction and the $20 limit is antiquated, this amendment assures the right of a jury trial for civil cases and guarantees that jury verdicts won’t be overturned, as sometimes happened in England. Those are significant rights to the litigants.

The Eighth Amendment says, “Excessive bail shall not be required, nor excessive fines imposed, nor cruel and unusual punishments inflicted.” Many of the punishments back then would certainly be considered cruel today, and bail was often set at unattainable levels.

These first eight amendments expressly apply only to the federal government. The first amendment, in fact, says, “Congress shall make no law …” Colonies could have such laws, and Congress couldn’t change them. Thus, in Massachusetts, until the 1820s, you had to go to the Congregationalist Church on Sunday or be fined. Some colonies/new states also prohibited Catholics and Jews from holding public office.

The Ninth Amendment provides, “The enumeration in the Constitution, of certain rights, shall not be construed to deny or disparage others retained by the people.” That is more or less an express answer to the fears brought up by Alexander Hamilton and others who were concerned that the very existence of a Bill of Rights might be read as suggesting that only the enumerated restrictions applied to the new government.

The Tenth Amendment says, “The powers not delegated to the United States by the Constitution, nor prohibited by it to the states, are reserved to the states respectively, or to the people.”

These final two provisions of the Bill of Rights, while often overlooked, are profoundly important. Unless otherwise expressly spelled out in the Constitution, governmental powers are reserved to the states and the people. The “one-size-fits-all” approach of federal lawmaking is incapable of considering the permutations and varieties that best serve individual states. Thus, the federal government is one of limited jurisdiction.

That leaves state and local governments, which are closer to the people, in position to be responsive to the people. That is pretty much exactly where revolutionary colonists would have wanted the nation to be.

Ronald J. Rychlak is the Jamie P. Whitten chair in law and government at the University of Mississippi. He is the author of several books, including “Hitler, the War, and the Pope,” “Disinformation” (co-authored with Ion Mihai Pacepa), and “The Persecution and Genocide of Christians in the Middle East” (co-edited with Jane Adolphe).