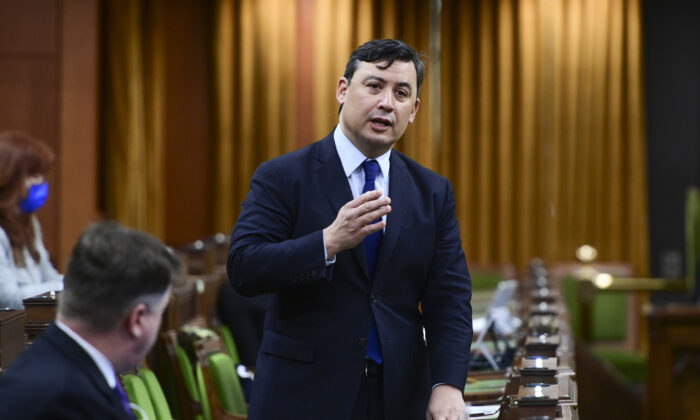 The Conservative Party’s foreign affairs critic Michael Chong has condemned the April 12 attack on the Hong Kong Epoch Times printing facility, and is calling on Ottawa to speak out against the Chinese regime’s crackdown on freedom of the press.

“This attack follows Beijing’s ban on the BBC from broadcasting in China, and the expulsion of dozens of foreign journalists from mainland China,” Chong said in a statement.

“The Chinese communist leadership continues to violate international law in Hong Kong by breaching the terms of the 1984 Joint Declaration, which guarantees freedom of the press and freedom of speech,” the MP said, referring to agreement between Beijing and the UK which set the terms for handing Hong Kong back to China from British rule in 1997.

The Epoch Times printing facility in Hong Kong was attacked on April 12 by four masked men, who smashed equipment with sledgehammers and scattered construction debris from a bag. The resulting damage forced the Hong Kong edition to temporarily halt operations.

Chong, an outspoken critic of the Chinese regime’s human rights record, was recently sanctioned by Beijing along with the parliamentary Subcommittee on International Human Rights and two U.S. officials. Chong sponsored a motion to declare the Chinese regime’s campaign against Uyghurs a genocide, which was unanimously approved by the House of Commons in February.

In his statement on the April 12 attack, Chong said suppression of an independent media outlet in China is concerning.

“Conservatives call on the Trudeau government to stand up and speak out against Beijing’s crackdown in Hong Kong and on a free press,” he said.

The U.S. State Department also condemned the attack, and urged authorities to investigate the issue.

“The United States is concerned by increased efforts to silence independent media and otherwise suppress freedom of expression, including the politically-motivated targeting of journalists,” a U.S. State Department spokesperson said.

The attack was condemned by a number of other lawmakers and press organizations around the world, including the Hong Kong branch of the Foreign Correspondents’ Club.

“The Foreign Correspondents’ Club, Hong Kong strongly condemns the attack on the Epoch Times’ printing presses and calls for the perpetrators to be brought swiftly to justice,” the group said in a statement.

Epoch Times Hong Kong office was the target of another attack in 2019, when four masked men dressed in black and wielding batons entered the print shop and set equipment on fire.