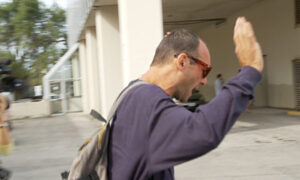 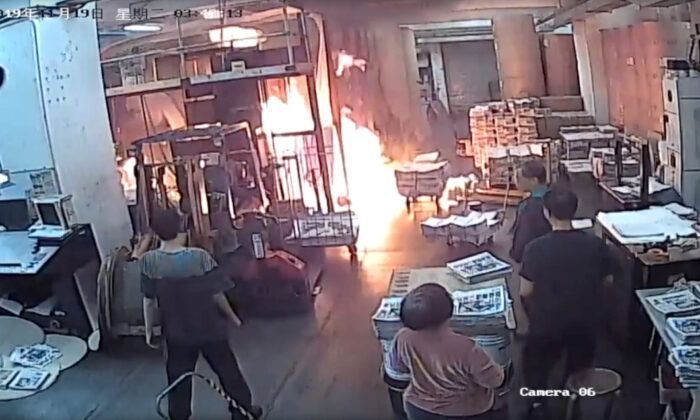 Staff at the print shop that prints the Hong Kong edition of The Epoch Times react to a fire started by four masked men on Nov. 19, 2019.
Viewpoints

An escalation of the ongoing attack on the liberties of the Hong Kong people took place on Nov. 19. At 3:50 a.m. local time, four individuals dressed in black and wielding batons entered the print shop and warehouse of the Hong Kong edition of The Epoch Times and set a fire.

The telescopic batons carried by the thugs are similar to those used by the Hong Kong police. Two of the thugs who carried out the attack were dressed in black with masks, like the Hong Kong protesters. This was apparently done in an effort to confuse the situation, as this tactic fits a pattern we have seen in Hong Kong. Police and thugs have pretended to be protesters, journalists, and citizens, and committed violence, including beatings and arson, then blamed the protesters in an attempt to discredit them.

Police and firefighters responded and made a report. They have requested the factory submit its CCTV footage as evidence.

The Epoch Times’ coverage of the Hong Kong protests has stood out. For instance, after the Hong Kong police laid siege to the Chinese University of Hong Kong campus, six Hong Kong newspapers on Nov. 12 ran front-page ads echoing Beijing’s rhetoric attacking the protesters. Only The Epoch Times and Apple Daily covered this escalation of police tactics on their front pages.

The CCP has worked to silence The Epoch Times for years. For instance, Ms. Lu, the Hong Kong edition’s circulation manager, said that in April a popular convenience store in Hong Kong tore up a contract for selling The Epoch Times under pressure from the CCP, despite the sales exceeding the contract requirements many times over. Lu also said there have been incidents of intimidation of journalists from time to time.

The arson on the 19th is the fourth attack on The Epoch Times’ print shop in Hong Kong. In February 2006, thugs broke into it and attempted to smash the printers. In October 2012, thugs attempted to break into the print shop but could not smash open the gate. In December 2012, seven men carrying multiple toolboxes appeared and began attempting to break through the gate. They fled after police were called.

The protests in Hong Kong have been an attempt to defend the fundamental liberties of the people of Hong Kong. They feel that if they don’t protest now, the CCP will force its tyranny over this formerly free city.

The most recent attack on The Epoch Times was an attempt to deny to the Hong Kong people a free press.

The Epoch Times will not be cowed. Hong Kong Epoch Times President Guo Jun said: “We are urgently repairing the printing factory. We are sure that we will be able to publish successfully tomorrow. Thank you for your support!”

The Epoch Times was founded in the United States in the year 2000 in response to communist repression and censorship in China. The Epoch Times’ media network currently covers 21 languages and 33 countries.