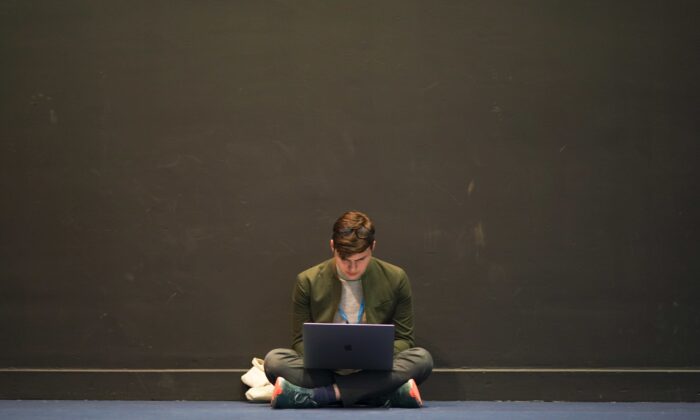 A delegate works on his laptop on the third day of the Conservative Party Conference at Manchester Central Convention Complex in Manchester, England, on Oct. 5, 2021. (Ian Forsyth/Getty Images)
UK

Online platforms could be forced to maintain a score of how truthful a person is, under new legislation proposed by MP John Penrose.

Penrose said that the purpose is to reduce the risk of harm to users of regulated services caused by “disinformation or misinformation.”

The person’s speech would then be “displayed in a way which allows any user easily to reach an informed view of the likely factual accuracy of the content at the same time as they encounter it.”

Penrose proposed in an amendment to the Online Safety Bill (pdf) that any “regulated service must provide an index of the historic factual accuracy of material published by each user” who has (a) produced user-generated content, (b) news publisher content, or (c) comments and reviews on provider contact whose content is viewed more widely than a minimum threshold to be defined and set by the UK online safety regulator Ofcom.”

The index must satisfy minimum quality criteria to be set by Ofcom, and “be displayed in a way which allows any user easily to reach an informed view of the likely factual accuracy of the content at the same time as they encounter it,” the amendment states.

“State arbitratation and indexing of truth and reliability is not practically possible nor is it desirable in a free society,” Victoria Hewson, head of regulatory affairs at the free-market think tank Institute of Economic Affairs, told The Epoch Times in an email.

“Asking social media, search engines, and Ofcom to gauge and record the ‘accuracy’ of content posted by millions of users is extreme, even by the illiberal and unrealistic standards of the Online Safety Bill,” said Hewson.

In June, the Scottish National Party’s John Nicolson and Kirsty Blackman, and Labour’s Alex Davies-Jones and Barbara Keele, attempted to add an amendment that said the bill “must include content that contains health-related misinformation and disinformation, where such content is harmful to adults.” Conservative MP Chris Philp said that the government would not support the amendment, though it agreed “with the intention behind the amendment.”

Last week, the government wrote that it will table an amendment to link the National Security Bill with the Online Safety Bill. If the bill passes, social media platforms will have to proactively look for and remove “disinformation” from foreign state actors.

It is currently at report stage, which is a chance for the whole House to discuss and amend the bill.

The Online Safety Bill is also currently at the centre of a battle within the Conservative Party, with the government pushing through the legislation, but other Tory MPs coming out against it.

The Department for Digital, Culture, Media, and Sport says that nothing in the bill will stop people accessing or posting legal content and that it will protect children from harmful content such as pornography and limit people’s exposure to illegal content, while protecting freedom of speech. On Thursday, the government tabled an amendment to the online safety bill that would prevent platforms from taking down news without an appeal process.

However, Lord Frost, the former Brexit minister, has increasingly spoken out, warning that the bill will be “highly damaging” to free speech.

MP Kemi Badenoch took a swipe at the bill as she entered the Conservative leadership race, saying in an op-ed for The Times Of London, “Rather than legislate for hurt feelings as we risk doing with the Online Safety Bill, we must strengthen our democratic culture at a time when democratic values are under assault from without and within.”

In a speech on Monday for the Riverside Advisory’s “Parliamentary Event in Support of Freedom of Expression,” reported by Guido Fawkes, Badenoch also made it clear she won’t support the Online Safety Bill in its current form.

“It is wrong and dangerous to limit free speech. The Online Safety Bill is going to have some serious implications for free speech. I have supported the government in every single bill since becoming an MP. I’m not going to be supporting it this week in its present form,” she said.

The Epoch Times has contacted John Penrose for comment.