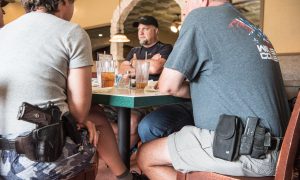 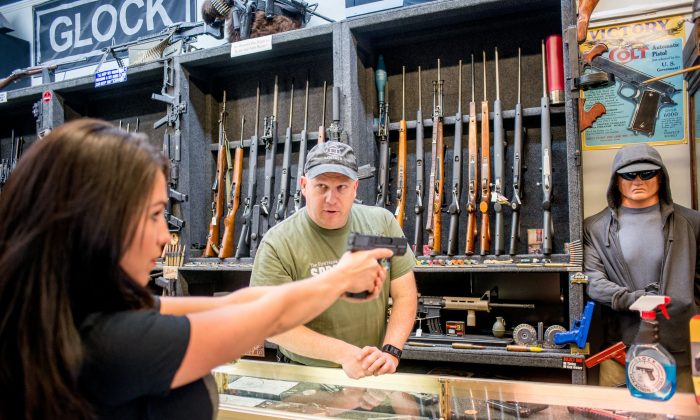 In this file image, Edward Wilks shows a gun to a customer at his store in Rifle, Colorado on April 24, 2018. (Emily Kask/AFP/Getty Images)
Politics

Democratic presidential candidate Beto O’Rourke is renewing calls for a “red flag” law as a Washington Post–ABC News poll released Sept. 9 reports that “86 percent” of Americans are in favor of these laws. Red flag laws allow law enforcement to disarm citizens based on anonymous reports regarding their perceived mental health or danger to society.

According to activists on the ground, especially in red states where conservatives feel targeted by federal gun confiscation designs, that figure is laughable.

“In South Carolina, legislators are standing up for constituents. We’re not going to stand by and allow the further erosion of our Constitution,” he said.

In South Carolina, Jones was among 39 state legislators in the state House and Senate who sent a letter to President Donald Trump urging the president to reject the “red flag” push.

“According to the National Alliance on Mental Health, 1 in 5 Americans suffers from a mental health issue in a given year. Absent the institutionalization of disturbed individuals, the person presenting actual threats to society will remain a threat after their firearms are removed. These individuals will still have access to vehicles, knives or countless other lethal items to commit mass murder,” the letter states.

“In states like Maryland, Oregon, and California that have enacted these ‘red flag’ laws, the individuals subject to ’emergency protection orders’ are effectively guilty until proven innocent,” the letter states. “This flips due process on its head. ‘Red flag’ laws erode the very cornerstones of our country, the right to keep and bear arms and due process. They also put law enforcement and citizens in adverse, unnecessary circumstances that will lead to more instances of police brutality and tragic death.

“During your candidacy for President, the former administration used the F.B.I. and F.I.S.A. courts against you. We are urging you not to give the federal government any more power to bypass our Constitution.

“Furthermore, we the undersigned urge you to remember your oath to protect and defend the Constitution of the United States, which expressly prohibits taking the inherent human rights of Americans without prior due process.”

The battle is heating up in other states, as evidenced by competing bills in the Oklahoma state legislature. One bill would impose a red flag law in the Sooner State, while another would prevent Oklahoma officials from recognizing the authority of any federal red flag law.

“The bill also has a felony provision for any law enforcement officer that were to try to implement a federal red flag law here in the state of Oklahoma,” said state Sen. Nathan Dahm, referring to his anti-red flag bill.

Kansas Senate candidate Kris Kobach, a close confidant of the president, recently offered sharp criticism for red flag laws in an interview with The Epoch Times, stating that “red flag laws that have been passed at the state level deny due process in multiple ways to the targets of individual gun confiscation complaints.”

“The standard of proof is very low. They have a hearing where they seize the person’s guns right away without [the person] even being told. The standard for disarming the individual is very low; it’s not a beyond reasonable doubt standard,” he said.