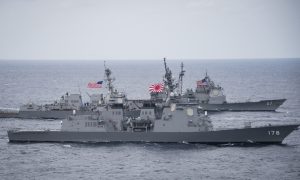 Conservatism is growing in America, but did you know that the same is happening in Japan? And how is it approaching increased Chinese aggression? On American Thought Leaders, Epoch Times senior editor Jan Jekielek sat down with Jay Aeba, Chairman of the Japanese Conservative Union (JCU), which is closely modelled after its American Equivalent, the ACU.

They discuss the priorities of conservatism in Japan, the China threat, and plans for the upcoming annual Japanese CPAC.

Jan Jekielek: Jay, it’s wonderful to have you back here on American Thought Leaders.

Mr. Jekielek: You are here just for a few days again. What brings you here? What exciting plans do you have?

Mr. Aeba: At the end of August, for the third time, we’ll be co-hosting J-CPAC in Japan with the ACU. I’m visiting this time for various presentations about this.

Mr. Jekielek: Fantastic. Tell me a little about what conservatism in Japan is all about. How is it different from in America?

Mr. Aeba: That’s a very important question. As you know, Japan has a history that’s more than 3000 years old. To protect the country’s traditional system is the most fundamental thing. However, some aspects of these traditions are bound to change, over the course of history and interactions with the world. I found, in these aspects that have changed, there are things in common with American conservatism, through many discussions with the chair and Secretary at the ACU. May I talk about that here?

Mr. Jekielek: I would love that.

Mr. Aeba: The first point is that we love a free economy. Then, the second point is that we love democracy. And the third point is that having a free economy and democracy leads to preferring a smaller government. It means it’s better to have a small government rather than a big government. And a very important viewpoint in conservatism, which is shared by Japan and America, is “self-responsibility.” I protect my own house. We protect our own society. We protect our own country. These are the sorts of values we find in Conservatism. And this brings us to the next pillar; to strengthen national security–this is one way of thinking as well.

Mr. Jekielek: It’s interesting. You mention national security. Because obviously the big great question mark now is China. And the US is taking a new approach to China compared to the past. I wanted to know what you think and how that is compatible with what you are doing or not doing in Japan.

Mr. Aeba: This is also a very important viewpoint. When I was debating various topics with conservative people and relevant people mainly in Washington DC from 2011 to 2012, about 7 to 8 years ago, the threat of China was not debated so much in the U.S. However, the more enthusiastically I talk to people, the number of people with this view has gradually increased. CPAC started to address Asian issues, and Chinese issues in Asia, about 4 years ago. And the Trump Administration has come to recognize China as a very big threat. They are a threat to America and Asia, and of course, to Japan–this is the viewpoint.

Mr. Jekielek: What about J-CPAC? Is this going to be a big topic at the upcoming J-CPAC?

Mr. Aeba: This is also a very important viewpoint. As for the national security issue, for example, I don’t know if you’re aware of this, but Okinawa, which is the most southern island, there is a conflict with China over territorial issues. And in Hokkaido, which is the most northern island, more and more land is being bought up by China. So both Japanese citizens and the Japanese government are feeling a threat. However, regarding the economy, some civilians think Japan cannot survive without the Chinese economy.

Mr. Jekielek: But Japan is also a competitor against China, wouldn’t you say?

Mr. Jekielek: Oh right. Absolutely. Okay so tell me a bit about what has changed in the last three years with these conferences you are having in Japan and the growth of the conservative movement.

Mr. Aeba: The biggest point is, although I’m repeating myself, is that in terms of national security, in the past, neither the Japanese media, Japanese government, or citizens regarded China as hostile or as a threat. But now, even the majority feels “we must be careful of China.” I believe this is perhaps a big achievement, of our activities.

Mr. Jekielek: Can you give me a sense of the growth since the beginning? When you first started the JCU?

Mr. Jekielek: The concept of conservatism, is that something that exists as a normal concept in Japanese thought? And if so, why did it take so long to start a JCU?

Mr. Aeba: Right, yes. Like in America, in Japan the liberal influence is very strong, and some people can be swayed by this left-wing communist-type force. As for conservative movements, various small groups were working separately, so it was necessary to create a large umbrella to unite these groups. I think the JCU is getting bigger because of this.

Mr. Jekielek: Tell me a little about, I heard there are going to be some distinguished people from America joining J-CPAC this year?

Mr. Aeba: As it will be held in August this year, not in the fall, I’m thinking this year’s feature will be that politicians from both the Senate and the Congress can join us.

Mr. Jekielek: What about the equivalent of congresspeople in Japan? Are there are lot of those that come to the event as well?

Mr. Aeba: That is right. Through being in contact with the Abe administration, we will invite the next leaders from Japan, and the U.S. and they will discuss various topics. It is a very attractive political event which hasn’t existed before.

Mr. Jekielek: Fantastic. So when will the agenda be ready do you think?

Mr. Aeba: It’s almost ready, and I think there will be more topics on the agenda ready to be announced from now. As for the topics decided, these are national security issues, the media bias issue, the trade war, as well as intellectual property and crypto-asset issues. These have already been decided.

Mr. Jekielek: I have one big question. I know we have to wrap up shortly. Tell me a little bit about the challenges of fake news in Japan.

Mr. Aeba: Very similar to America. For example, in America, there are various stories about President Trump portraying him as a ridiculous character. Likewise, for the long-lasting Abe administration, there are media reports such as Prime Minister Abe is totalitarian, Prime Minister Abe is a dictator. There are fairly strong forces trying to pull him down by creating scandals, and making up stories.

Mr. Jekielek: What do you think, aside from national security and this fake news issue, would be the most important issue for the Japanese people that you could share with them?

Mr. Aeba: If there is something we can share, it’s an important viewpoint which I have not yet referred to, that is the issue of human rights. Currently China is taking a very suppressive attitude against Uyghurs, Tibetans and Mongolians. Only recently, police suddenly entered the Hong Kong Parliament to stop them debating. They seal off freedom of speech. On top of that, as for Tibetans and Mongolians, they buy and sell human bodies and organs without any concerns. It is important to highlight these areas to ensure Japanese people won’t be in the same situation. This is an issue, we have to focus our actions on properly. Asian issues are also seen as painful issues for us Japanese people, too.

Mr. Jekielek: That’s excellent to hear. Any final words before we finish up, Jay?

Mr. Aeba: Yes. What I would like to emphasize is that when I first joined JCU, it was just me, and in a way, a lonely activity for me. But I gained American conversative friends, and now we can work together, just like family, just like friends, really like a team, I sincerely appreciate this. We would like to work together and do our best so that the strong ties between the U.S. and Japan will lead to prosperity, not only in the US and Japan, but in Asia and the world.

Mr. Jekielek: That’s a powerful place to end. Thank you very much Jay.