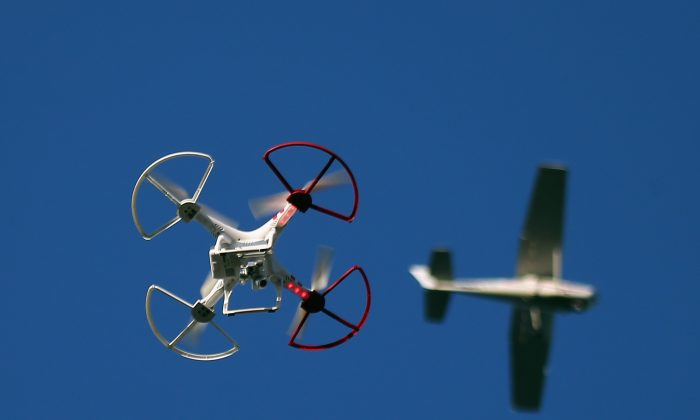 A drone flies for recreational purposes above Old Bethpage, New York, while an aircraft passes nearby in the sky. (Bruce Bennett/Getty Images).
Tech

Consequences for Not Registering Your Drones

If you received a drone as a gift this holiday season, before you fly it, you have to register it with the Federal Aviation Administration (FAA).

Around 700,000 drones are estimated to have sold in the United States in 2015, for a revenue of $105 million. This number will only grow in the future with the U.S. drone market expected to approach $300 million by 2018, according to Consumer Technology Association reports.

Drones have become increasingly popular as gifts and hobby items, especially as prices have come down—Walmart’s cheapest drone can be bought in-store for just $30.

In response to rapid rise in drone sales, and the already existing problem of the misuse of drones, the FAA created a national registration system. To avoid hefty penalties or possible jail time, consumers need to be aware of the new regulations.

The cost to implement the registration system will be $383 million, according to FAA estimates.

As drones, or unmanned aircraft systems (UAS), increase in popularity, so too do the safety concerns.

In 2015, there was a dramatic increase in reports of drones flying near aircraft, which is dangerous and illegal given it could lead to a potentially deadly collision.

Drones are only allowed to fly below 400 feet, yet some pilots have reported seeing drones at an altitude of 10,000 feet. In June alone there were 138 pilot reports of sighting around 10,000 feet, according to the FAA.

It seems like the drone registration could be an answer to this problem or at least make illegal activity less frequent.

The FAA is also working with industry partners on their “Know before you fly” campaign to help educate UAS users on where they can operate within the rules.

You can register on paper or online for $5 (but free for the first 30 days), to generate a certificate that is valid for three years. It will also include a unique owner-identification number, which must be marked on all aircraft they own.

Failure to register an unmanned aircraft can result in civil penalties reaching up to $27,500.

During the public comment phase, FAA received multiple comments citing concerns on the compliance and enforcement of the regulation.

One comment from the Minnesota Department of Transportation Office of Aeronautics and Arlington Police Department (APD), raised concerns on the general lack of awareness on UAS regulations in the public as well as among operators, airports, and law enforcement.

Another comment from APD said it and other local law enforcement agencies do not have the capacity or authority to enforce FAA’s rules and noted that the FAA must retain responsibility.

Several commenters said it would be too difficult to enforce and would not be worth the expense required to develop and implement the program, including the cost to train law enforcement officials.

Further comments noted that no federal, state, or local law enforcement agencies have the budget or workforce to enforce the rules, and others questioned if the FAA had sufficient manpower to deal with enforcement.

FAA replied to these comments stating that they are already and will continue to use outreach and education to encourage compliance. They said they would use administrative action or legal enforcement for those who do not comply.

FAA administrator Michael Huerta says that if you own a drone—you are an aviator, and with that title comes a great deal of responsibility: “If you own a drone, register it. Know your pre-flight checklist. And give the gift of safety to your friends and family this holiday season by encouraging them to register their drones.”