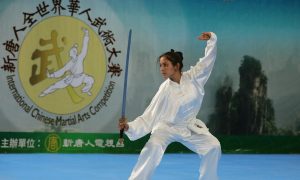 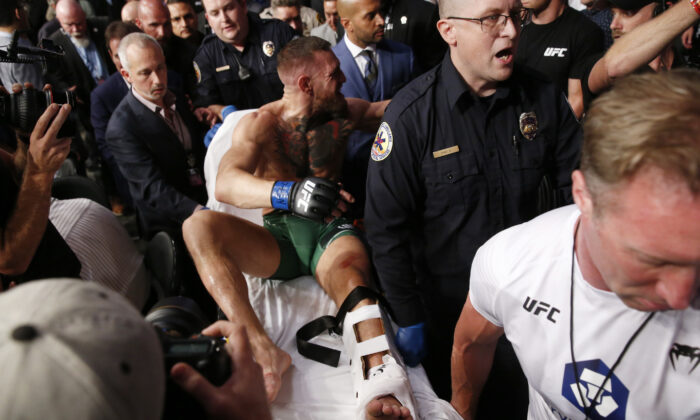 Conor McGregor is stretchered from the octagon after snapping his ankle in a fight with Dustin Poirier during UFC264 at T-Mobile Arena, Las Vegas, on July 10, 2021. (Steve Marcus/Reuters)
Sports

LAS VEGAS, Nevada—Conor McGregor suffered a broken leg in another crushing defeat to Dustin Poirier at the T-Mobile Arena in Las Vegas on Saturday, with the fight stopped by doctors at the end of the first round.

As a thrilling first five-minute frame drew to a close, both fighters were still trying to land as McGregor stumbled backwards, trapping his foot under himself and breaking his ankle.

Medics were immediately called into the octagon and it was clear that McGregor could not continue, prompting referee Herb Dean to declare a stop to the bout on the instructions of the doctor.

Interviewed in the octagon with his leg in a cast, McGregor raged about his misfortune.

“I was boxing the head off him, kicking the leg off him, (he was doing) the usual, diving to close the distance. This is not over,” he said.

With McGregor having won at featherweight in 2014 and Poirier extracting his win at lightweight in Abu Dhabi in January, the run-up to the third fight was punctuated by tension between the pair, in marked contrast to a face-off earlier this year where the pair paid each other compliments.

Though American Poirier was fighting on home turf, his entrance to “The Boss” by James Brown was greeted with boos from the sizeable portion of the crowd that was there to support McGregor, and there was no friendly touch of gloves before the fight began.

McGregor came out fast, switching between high and low kicks, and dancing in and out of range as both fighters maintained a furious pace.

The Irish fighter tried a guillotine choke as the fight went to the mat with Poirier in top position, and when he had escaped the choke he rained down thunderous punches and elbows on McGregor.

Though McGregor struck back, Poirier looked set to finish the fight before abruptly breaking off his attack in the final seconds of the round to complain to referee Dean that the Irishman was grabbing at his gloves.

As McGregor swung and tried to back away, his footwork let him down, snapping his leg.

“He fractured it in one of the checks at the beginning of the fight and he broke it on a punch, for sure … I felt something, he was kicking me hard,” Poirier said in a post-fight interview.

The doctor’s stoppage is chalked up as a win for Poirier and a loss on McGregor’s record, his third defeat in his last four fights in the UFC.