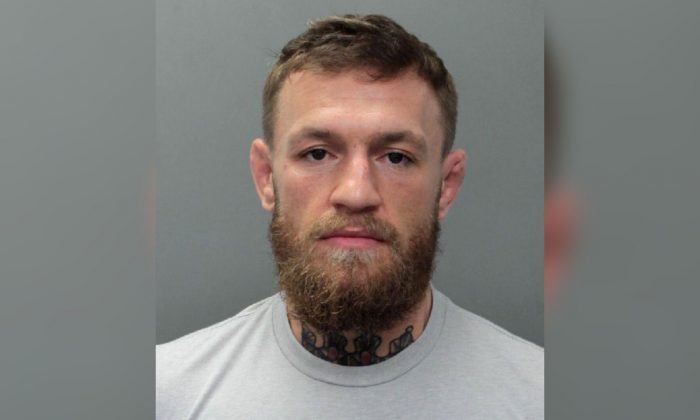 Mixed martial arts fighter Conor McGregor has broken his silence after being arrested in Miami on charges of robbery and criminal mischief.

According to a Miami Beach Police arrest report, the 30-year-old Ultimate Fighting Championship star was taken into custody on March 11 and charged with two felonies after allegedly damaging and stealing a phone.

“MBPD has arrested and charged Conor McGregor, DOB: 7/14/88, with strong arm robbery and criminal mischief, both felonies,” the police wrote on Twitter and posted a copy of the arrest report.

McGregor then allegedly “stomped on the victim’s phone several times, damaging it.”

McGregor then grabbed the phone and left the area, the report said. Police later found McGregor at his local address.

Police picked up Conor McGregor at this home on Venetian Dr in Miami Beach hours after an altercation at the Fontainebleau Hotel where they say he slapped a man’s phone out of his hand, stomped on it and confiscated it. The victim police say was trying to take a picture. @wsvn pic.twitter.com/Vr9U33r8rt

McGregor then posted a $12,500 bond before he was released after spending just under four hours in police custody in Miami-Dade County.

WATCH: Footage from moments ago as MMA star #ConorMcGregor leaves jail in Miami-Dade County. He was arrested earlier today after allegedly smashing a man's phone and taking it. Read the latest here: https://t.co/EdMPjTYBMp pic.twitter.com/hDASDqwV3C

Conor McGregor was swarmed by media while leaving a correctional facility in Miami after being arrested earlier today. pic.twitter.com/RrRuyD1pnb

“Patience in this world is a virtue I continue to work on,” McGregor wrote on Instagram. “I love my fans dearly. Thank you all.”

Patience in this world is a virtue I continue to work on. I love my fans dearly. Thank you all ❤️

Earlier his lawyers issued a statement saying McGregor would cooperate fully with the investigation.

“Last evening Conor McGregor was involved in a minor altercation involving a cellphone that resulted in a call to law enforcement,” Samuel J. Rabin Jr., a Miami-based attorney representing McGregor, said in a statement. “Mr. McGregor appreciates the response of law enforcement and pledges his full cooperation.”

According to online records, Conor McGregor has been arrested in Miami. Miami Herald reports McGregor is being accused of breaking a fan’s phone. pic.twitter.com/JW1UzhniVy

Monday’s incident is the second time in the past year where McGregor was taken into police custody and charged.

Last April, McGregor was arrested after attacking a bus filled with UFC fighters inside the Barclays Center in New York.

McGregor smashed a bus window with a dolly, injuring at least two fighters. He was arrested and faced multiple charges, including assault.

The Irish fighter later reached a plea agreement for one misdemeanor count of disorderly conduct.

He had just recently finished the community service required by the courts for that incident.

McGregor, who’s from Ireland, is the former UFC featherweight and lightweight champion and one of the biggest draws in the MMA.

He returned to UFC last fall to face Khabib Nurmagomedov after a hiatus during which he made his boxing debut, a loss to Floyd Mayweather.

After beating McGregor, the Russian fighter scaled the octagon fence and sparked a melee involving members of both fighters’ corners.

Nurmagomedov was fined $500,000 and suspended for nine months for the brawl.

McGregor was fined $50,000 and suspended for six months.