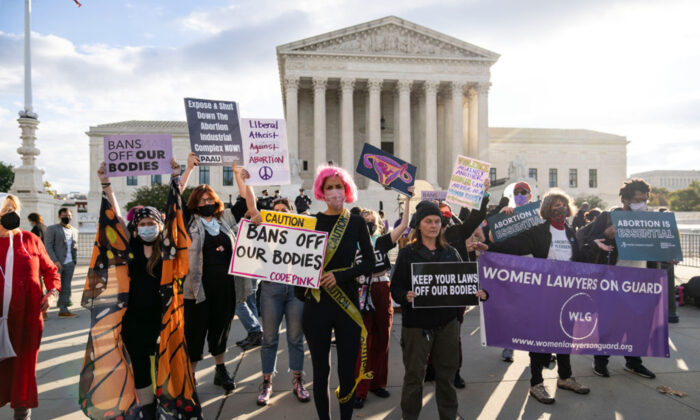 The Supreme Court on Wednesday heard oral arguments for and against a Mississippi law that would ban abortions after 15 weeks. The arguments—pro and con—are familiar, but there is a greater argument to be made for upholding the law and, should a majority of justices decide to do so, overturn Roe v. Wade.

That greater argument begins with several questions that may be connected to abortion. They include: Why is there so much looting? Why the indiscriminate destruction of property? Why are there so many shootings in our major cities? Disrespect for and devaluing babies yet to be born has led to disrespecting the lives of those already born, along with property that belongs to others. How else to describe what looks like anarchy in our streets?

Those who wish to maintain the abortion status quo claim overturning Roe will cause the country to be torn apart. It is already torn apart in many ways in addition to the divisions over abortion. Since 1973 when abortion became legal, an estimated 62 million babies have been aborted in this country.

At a time when the label “racist” is freely and in many cases wrongly applied, real racism is taking place in many abortion clinics. Former Vice President Mike Pence noted this in a speech he delivered Tuesday to a gathering of pro-lifers convened by the Susan B. Anthony List organization. Pence noted: “Despite being less than one-third of the population, blacks and Hispanics account for nearly two-thirds of all abortions performed.”

Technology has advanced since 1973 when Roe was decided. Pence alluded to those advances that now allow sonograms to see with amazing detail the human body that is under development: “Thanks to advances in modern medicine, the humanity of a 15-week-old child in the womb is undeniable. At 15 weeks of development, a baby’s face is well-formed. She has fingernails, eyebrows and hair. She can make a fist and suck her thumb. She has a beating heart. She can feel pain. And she is created in the image of God, the same as you or me.”

The problem with that last sentence is that we are increasingly a more secular nation and so arguments in favor of protecting unborn human life must also be pragmatic—the number of babies born is not enough to replace the number of people who die; information about alternatives to abortion is being denied some women by those who have a financial and political interest in keeping abortion clinics operating; minorities are being targeted because some likely see abortion as an answer to welfare and crime.

Many who claimed to be strongly pro-life in the early days following Roe, later flipped for political reasons. Few were stronger in their pro-life views than Rev. Jesse Jackson, who in 1975 connected the dots between abortion and slavery: “There are those who argue that the right to privacy is of a higher order than the right to life. … That was the premise of slavery. You could not protest the existence or treatment of slaves on the plantation because that was private and therefore outside of your right to be concerned.”

Mike Pence noted in his address: “Forty-seven out of 50 European countries limit elective abortion PRIOR to 15 weeks. France, Spain and Belgium have a limit of 14 weeks. A majority of European countries are even more restrictive, with Germany, Norway, Switzerland, Denmark, Greece, Austria, Italy and Ireland banning abortion on demand after 12 weeks.” To our shame, the United States allows abortion at any stage of pregnancy with only minimal exceptions.

The Supreme Court has an opportunity to correct a great legal and greater moral wrong if it will “seize the time” and connect the dots between abortion, the unique value of human life at all stages, and the social upheaval that is consuming us because of the court’s refusal in the last 48 years to restore legal protection to the most vulnerable among us, the unborn child.