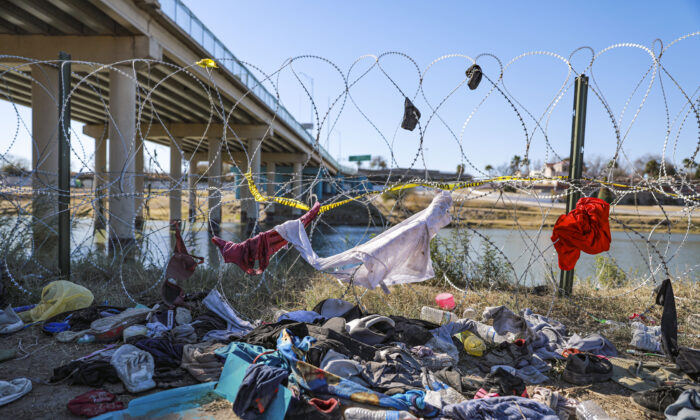 Some of the piles of clothing and trash discarded by illegal immigrants after they cross the Rio Grande from Mexico under the international bridge into Eagle Pass, Texas, on Jan. 25, 2022. (Charlotte Cuthbertson/The Epoch Times)
Immigration & Border Security

As illegal crossings from Mexico to the United States surge, two Republican congressmen have asked Homeland Security Secretary Alejandro Mayorkas to provide documents showing how those mass movements are spreading garbage, killing wildlife, and trashing both public and private property.

“President Biden’s border policies not only place our nation’s security at risk and increase the flow of illicit drugs—especially fentanyl—into our country, but also degrade our federal lands along the border,” Rep. Bruce Westerman (R-Ark.) and Rep. Blake Moore (R-Utah) wrote in the June 2 letter.

It follows a similar 2021 letter from Westerman and Rep. Paul Gosar (R-Ariz.)

“Recent reporting describes significant accumulation of garbage along the Rio Grande in Texas, documenting discarded clothing, hygiene items, and plastics along a path used by migrants to cross the border,” the letter states.

“Sadly, reports like this are neither surprising nor unique. The environmental consequences of illegal immigration are well known, resulting in the endangerment of wildlife, decimation of habitats, and destruction of vegetation.”

Axelrod has filed multiple lawsuits arguing that the Department of Homeland Security (DHS) must conduct an environmental analysis under the National Environmental Policy Act (NEPA) on the Biden administration policies that helped foster the current border crisis.

Large-scale immigration, both legal and illegal, drives population growth in the United States. That population growth leads to more urban sprawl and other effects that may jeopardize the natural environment as well as human health and well-being.

“It turns NEPA on its head to have no recognition and no analysis when you change an immigration policy,” she said.

She drew The Epoch Times’ attention to the DHS’s recent NEPA environmental assessment concerning the construction of a new dormitory building and the destruction of four old dormitories in El Paso. The assessment included considerations of the likely effects of that small-scale project on local population trends.

Westerman and Blake described how drug trafficking along the porous southern border is wreaking havoc on nearby tribal communities—including near the Tohono O’odham Nation, which Grijalva frequently visited while campaigning against President Donald Trump’s proposed border wall.

“A lot of these so-called drug dealers, cartel members, you know, they use Native Americans, because of the revenue we do get. They feed off of us [Native Americans] a lot,” Wayne Cortez of the Torres Martinez Desert Cahuilla Indians testified in an April hearing of the Oversight subcommittee, as quoted in the June 2 letter.

Grijalva has also repeatedly called for the repeal of Title 42, implemented by the Trump administration in March 2020 to control immigration flows as the COVID-19 pandemic kicked into high gear.

Just weeks ago, a federal judge prevented the Biden administration from ending Title 42.

DHS officials didn’t respond by press time to a request by The Epoch Times for comment. Neither did Westerman, nor Grijalva.