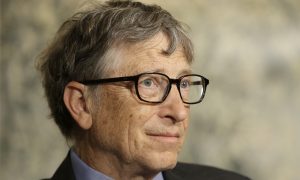 Bill Gates: 'I Made a Mistake' in Meeting With Jeffrey Epstein
0
Share Now
TelegramFacebookTweetEmailTellMeWeReddit
Copy Link

While posting on Twitter about the open impeachment hearing on Nov. 14, a Congressman spelled out “Epstein didn’t kill himself.”

The content of the tweets, though, were focused on the impeachment efforts against President Donald Trump.

In the first tweet in the series, which was posted last, Gosar wrote: “Evidence of a link between foreign aid and political investigations simply does not exist. The longer this circus continues the clearer it becomes that @realDonaldTrump has done absolutely nothing wrong.”

That “E” was followed by another post that started with “P.”

“President @realDonaldTrump voluntarily chose to release the transcript of his phone call which clearly shows he did nothing wrong. This impeachment circus is a total sham, and Adam Schiff is the clown at the center of it all,” Gosar wrote.

After some noticed Gosar’s spelling out of “Epstein didn’t kill himself,” Gosar added another missive joking about what he’d done.

𝐀ll of the tweets pertained to today’s hearing.
𝐑est assured, they are substantive.
𝐄very one of them.
𝐀ll of them.

𝟓 were brilliant.
𝟏 was okay.

“Epstein didn’t kill himself” refers to financier and convicted sex offender Jeffrey Epstein, who was found unconscious in his New York prison cell on Aug. 10.

While the New York City medical examiner later ruled the death a suicide, a number of people have suggested Epstein was actually murdered. According to one survey, only a third of American voters believe that Epstein committed suicide.

Dr. Michael Baden, a forensic specialist hired by Epstein’s brother Mark Epstein, claimed that Epstein might have died from homicide, but Dr. Barbara Sampson, the city’s medical examiner, stood by the suicide conclusion.