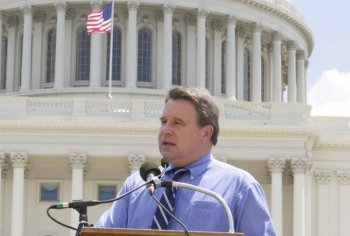 SPEAK OUT: Congressman Chris Smith (R-N.J.) speaks on the West Lawn of the U.S. Capitol on July 22 where around 500 Falun Gong practitioners from around the world gathered in peaceful protest against the Chinese Communist Party's persecution. (Lisa Fan/The Epoch Times)
US

Congressmen Call for End to 11-Year Persecution of Falun Gong

Gary Feuerberg
View profile
Follow
biggersmaller
Print
WASHINGTON—On the West Lawn of the U.S. Capitol at high noon on Thursday, about 500 Falun Gong (also known as Falun Dafa) practitioners from around the world gathered in protest of the Chinese Communist Party’s persecution of the meditation practice for the past 11 years.

Members of Congress, human rights activists, and Christian organizations joined offering their support for a new dawn of religious freedom in China.

“That is absolutely despicable,” shouted Rep. Smith. “[Those who] cherish freedom must speak out against the brutality and hate that everyday manifests by the dictatorship of Beijing.”

Rep. Ros-Lehtenin said that the “Chinese communist regime’s obsessive and relentless hunting down of practitioners of Falun Gong” is “one of the most flagrant examples of systematic persecution in the 21st Century.”

Ros-Lehtenin was the author of H.R. 605 which called upon the Chinese regime to cease its campaign against Falun Gong practitioners and abolish the 6-10 office, which is given the mandate to "eradicate" Falun Gong. The resolution also called for the release of Falun Gong practitioners from prisons and reeducation through labor camps. It passed in March, overwhelmingly, 421 to 1.

Congresswoman Ros-Lehtenin said nothing had changed in the last four months since her resolution passed. “The persecution of Falun Gong is barbaric, bloody, and brutal, and it must come to an end at once!”

If anything the trend has been that the persecution is getting worse, observed Senator Mark Udall (D-Colo.), in a statement read at the rally. “Over the last 11 years of the ban against practicing Falun Gong in China, we have seen persecution against Falun Gong intensify, including an increase in censorship of websites, television stations, and other forms of media sympathetic to Falun Gong.”

Two of the speakers were survivors of China’s Re-education Through Labor camps. Charles Lee spent three years in a labor camp. Jennifer Zeng from Sydney, Australia, said she was present in July 1999 when the first Falun Gong practitioners were rounded up. She was eventually sent to a labor camp where she said she was “beaten, shocked by electric batons to every part of the body,” and deprived of sleep for days.

Reggie Littlejohn, President of Women’s Rights Without Frontiers, said that often female Falun Gong practitioners undergo forced abortions while being detained. She said that forced abortion and forced sterilizations were state policy in China and really forms of torture, which may explain the unusually large rate of female suicides in China and why China is the only country in the world where the female suicide rate is higher than the male suicide rate.

Nearly all the speakers were not Falun Gong practitioners, but they expressed solidarity with the peaceful practice and appreciation for what Falun Gong has done to expand freedom for others.

“You have not surrendered to the tyranny, but have fought against it with the power of your hearts and minds. Through your television broadcasts, newspapers, and internet websites you have spread the word and provided access to the truth for those who live under the communist party’s lies and oppression,” said Congressman Gus Bilirakis (R-FL.).

He continued: “Please know that as a member of the House Foreign Affairs Committee, I have worked hard to make sure your voice gets heard. … Your numbers cannot be denied and your collective voice cannot be stopped, especially not here in the United States, by Chinese communist thugs. I stand with you and share your principles of truthfulness, compassion, and forbearance.

Congressman Doug Lamborn (R-Colo.) observed the first clause of the First Amendment of the U.S. Constitution is about freedom of religion, which he said every person deserves, and expressed his solidarity with the protesters. The Congressman said, “We need to have change in the way we do business in the Peoples Republic of China.”