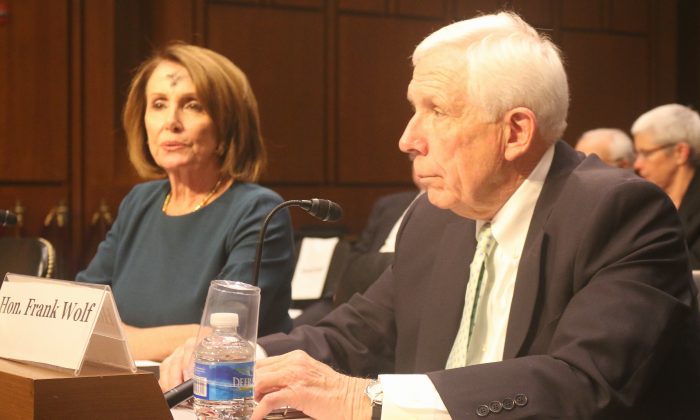 WASHINGTON—Democrat Minority Leader Nancy Pelosi and former Republican Congressman Frank Wolf were in total agreement as witnesses at the Congressional-Executive Commission on China (CECC) hearing on March 1. Both had been vigorous, vocal opponents of granting Normal Trade Relations with China that was promoted by the Clinton Administration and paved the way for China’s entry into the World Trade Organization in Dec. 2001.

Pelosi and Wolf warned again during the Bush Administration that supporting China’s accession to the WTO without preconditions would be a mistake.

Congressman Chris Smith (R-N.J.), co-chairman of the CECC, lent his voice too in those days urging resistance to the argument that increased trade would open the pathway to gradual political liberalization and the rule of law. In his opening statement, Smith said granting China Permanent Normal Trade Relations (PNTR) with the idea that more trade and investment would bring about political reform and human rights improvement was a “bipartisan fantasy.”

“Bill Clinton predicted that trade would open China’s political system. Chinese democracy was ‘inevitable, just like when the Berlin Wall fell.’ George W. Bush also focused on the inevitability of history saying ‘trade freely with China and time is on our side,'” said Smith in a statement made part of the hearing’s record in his absence.

The far-reaching claims concerning the effect of trade prompted James Mann to write “The China Fantasy,” published in 2007. Mann testified at the hearing that he argued back then that “the Chinese regime wasn’t going to change in the way that American leaders said it would.” He questioned the assumption that China’s authoritarian rule would not last much longer.

Mann said that China, now richer, had in the past few years entered “into new types of repression: arresting lawyers, severely restricting NGOs, and staging televised confessions of those who are detained.”

Wolf said that he thought it a bit curious that a mere ten years after the brutal slaughter of Tiananmen protesters, prior to the passage of PNTR in 2000, “a school of thought took root which argued for increased trade and economic ties, as opposed to sanctions and a tough line.”

“The push for PNTR was borne, I believe, of wishful thinking rather than evidence or a genuine understanding of the Chinese Communist Party’s goals and objectives,” Wolf said.

The push for PNTR was borne of wishful thinking rather than evidence or a genuine understanding of the Chinese Communist Party’s goals and objectives.
— Congressman (Ret.) Frank Wolf (Va.)

Michael Wessel, commissioner of the U.S.-China Economic and Security Review Commission, said, the proponents of PNTR “got it wrong.” The business community, “who once saw China as the avenue for enormous profits and opportunity” see now the “harsh reality.” He said that the American Chamber of Commerce in China’s most recent report found that 80 percent of businesses felt less welcome in China than before.

Wessel said later, “China PNTR  … increased America’s dependence on China’s manufacturing products and limited the willingness of the business community, and our government, to respond.”

The CECC was established in connection with the ongoing debate in Congress on whether to grant China PNTR status. Chairman of the CECC Sen. Marco Rubio (R-Fla.) noted in his opening statement that Congress didn’t want to forgo the capability to review China’s human rights every year. One of stated reasons for Congress creating the Commission in 2000 was to monitor China’s compliance with international human rights standards.

U.S. leverage on influencing China’s human rights behavior has diminished as China’s economic strength has increased. Pelosi stated that in 2000, the U.S. trade deficit with China was $5 billion annually. Today, it is $6.2 billion per week, she said.

We chose to ride a tiger and the tiger will decide when we get off.
— House Minority Leader Nancy Pelosi (D-Calif.)

“We chose to ride a tiger and the tiger will decide when we get off. And it has curtailed the ability of America to talk about human rights in China because the corporate interests are so great.”

Wolf echoed what Mann said about enhanced repression over the years, including the Chinese regime’s recent rounding up of human rights lawyers who defend religious minority groups, such as Uyghur Muslims, unregistered Christians, and Falun Gong practitioners.

Raising his voice several decibels with righteous indignation, Wolf recounted a Washington Post story about Chinese lawyer Li Chunfu, who, Wolf said, “was imprisoned in secret detention for 500 days and brutally tortured and drugged.” As a result, he was diagnosed with schizophrenia, he said.

One might infer that Wolf was nearly shouting on this and other examples he gave of China’s repression because most of his colleagues in Congress going back to the Tiananmen Square Massacre in 1989 have been deaf to the human rights record of China.

Chairman Rubio said that China “has engaged in brazen cyberattacks on the U.S. government and U.S. commercial interests.  Intellectual property theft is rampant. It is arbitrarily detaining American citizens.”

“Meanwhile U.S. companies, including major household names, daily weigh the enticement of the Chinese market against staying true to their own core principles and missions.  Do they curb speech to gain access?  Do they curry favor with the authorities by sharing sensitive technology that can be employed by the Communist Party to further surveil and repress Chinese citizens?

Does a Hollywood producer self-censor before the Chinese censors have a chance to, in order to gain market access for a new film?  Does an American university, home to a Chinese government-funded Confucius Institute, opt not to invite the Dalai Lama to speak at their campus for fear of losing financial support?”

Perhaps no better example of the U.S.’s position vis-à-vis China’s unlawful actions is that of Sandy Phan-Gillis—American citizen, mother and resident of Houston for almost 40 years. Her husband Jeff Gillis testified at this hearing that she has been detained in China for two years by China State Security, China’s spy agency (not China Public Security, which is China’s police force).

Phan-Gillis was on a trade mission to China with the Houston mayor when she was seized by China State Security on Mar. 19, 2015. Her being kept in isolation prevented her travel companions and her family from knowing about her detention. Mr. Gillis only learned of her detention after filing a missing person report with the U.S. Consulate in Guangzhou.

China State Security subjected Phan-Gillis to solitary confinement and relentless questioning in a torture chair. This chair is a short 4-leged stool with no back or armrests and with raised teeth in the seat. Mr. Gillis said that his wife has serious medical conditions, and for a while, she was denied access to medicine. “China State Security used torture to force Sandy to make a false confession,” he said.

There is some irony in the fact that she was a strong supporter of China’s entry into the WTO and had devoted her entire career promoting trade and good relations with China, according to Mr. Gillis.

Mr. Gillis said that his wife was not allowed to see her attorney for over a year and that she was not even charged with a crime for well over a year. Finally, she was charged with being a spy on China for the FBI (which he noted is not a spy agency) and assisting the FBI in the capture of two Chinese spies in the United States and turning them into double agents. Mr. Gillis showed at the hearing how the charges are easily proved false and absurd. The details are contained in his written testimony which is available at the CECC’s website.

Where is the outrage, where is the action, and where are the consequences for China?
— Jeff Gillis, husband of American businesswoman detained in China for two years

After nearly two years, she has had no appearance before a judge and there’s still is no scheduled trial date. Arbitrarily detained, subjected to solitary confinement and torture and not so much as a hearing before a judge, Mr. Gillis said, “where is the outrage, where is the action, and where are the consequences for China?” He believes that human rights abuses such as what is happening to his wife go unchallenged because we are addicted to cheap Chinese products and obsessed with access to Chinese markets.

The CECC commissioners and witnesses agreed that we should abandon the assumption that trade will gradually open up political reform in China. That’s not going to happen. Instead, the U.S. needs to take a much tougher stance and reciprocate in kind whenever the China regime’s actions are problematic.

“What China permits or denies to Americans operating in China should be equally permitted or denied to Chinese operating in the United States. This principle should be applied to business negotiations, to non-government organizations, to the news media,” said James Mann.

China Director of Human Rights Watch Sophie Richardson agreed that the United States and E.U. and other nations need to find their voice and leverage when confronted with China’s conduct on national security or economic issues. Trying to use “persuasion” and “chumminess” to effect change in human rights and religious persecution hasn’t worked. She said that decades of experience make clear that “Beijing responds only to the expectation of unpleasant consequences.”

“Many senior Chinese officials with long track records of presiding over human rights abuses have bank accounts outside the country that could be frozen, Richardson said in her written testimony. Wolf pointed out that the Trump Administration could use the new authorities granted under the Global Magnitsky Act to restrict travel of Chinese government officials committing egregious human rights abuses.