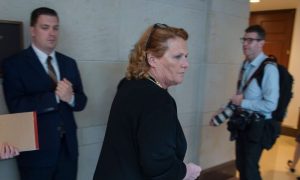 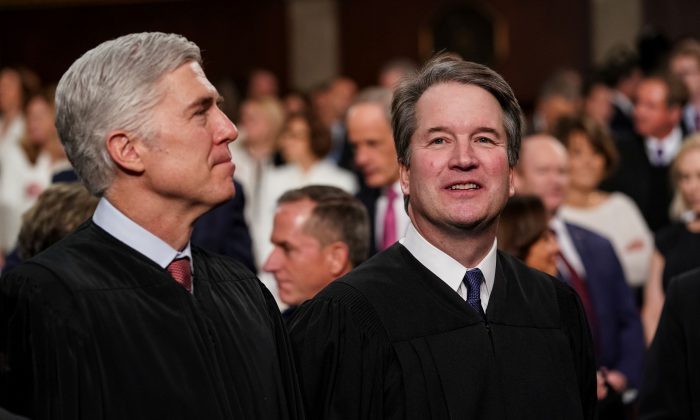 Supreme Court Justices Neil Gorsuch and Brett Kavanaugh attend the State of the Union address in the chamber of the U.S. House of Representatives at the U.S. Capitol Building on Feb. 5, 2019. Both men have sided with liberal justices in several cases since their appointments, using individual interpretation of the law as the basis of their judgements rather than politics. (Doug Mills-Pool/Getty Images)
Viewpoints

Nobody can forget what Justices Neil Gorsuch and Brett Kavanaugh were forced to endure before they were finally confirmed to the Supreme Court.

At the time, Democrats adamantly opposed any Trump-appointed nominee for the nation’s highest court. As reported in the Washington Times, Kamala Harris (D-Calif.) went as far as to call any of the president’s potential picks “non-starters,” writing: “They are conservative ideologues, not mainstream jurists. We cannot and will not accept them to serve on the highest court in the land.”

Not only were Harris and many of her Democratic colleagues wrong, but they also owe both men a heartfelt apology.

Democrats were serious about doing whatever possible to keep these two wonderful jurists off the bench. When Gorsuch was nominated, the court was seemingly replacing one conservative justice (Justice Antonin Scalia) with another one (Gorsuch). What should have been a relatively uneventful confirmation turned into a political brawl. Republicans eventually utilized the “nuclear option” to get Gorsuch confirmed, although it took more than a year.

The confirmation process involving Kavanaugh was even more sinister, given that Kavanaugh, a Trump-appointed constitutional conservative, was replacing Justice Anthony M. Kennedy, a “swing-voter.” As a result, Democrats put him through a grueling and unnecessarily cruel confirmation process, which included threats of impeachment, multiple FBI investigations, more than 30 hours of testimony, individual meetings with senators, and a public hearing involving Christine Blasey Ford, during which he had to defend himself against uncorroborated and unsubstantiated allegations of sexual assault. Kavanaugh was finally confirmed to the Supreme Court, although his life was forever changed.

It goes without saying that nobody deserves to be treated this way. These judges (now justices) were mistreated simply because they were nominated by Trump and because they were conservative-minded. Democrats in Congress were willing to go to any lengths, regardless of the cost (monetary or otherwise), to keep them off the bench. This is especially true in Kavanaugh’s case, in which Senate Democrats proved that nothing was off-limits.

While Democrats were concerned that these two justices would ensure a conservative majority, Gorsuch and Kavanaugh have proven them wrong on numerous occasions since they were seated, each siding with the “liberal” side of the Supreme Court in some cases.

“The defining characteristic of both Justice Gorsuch and Justice Kavanaugh is that they have a very solid judicial philosophy. It’s not a political approach to the cases where you say what the outcome of this case is going to be and now find a judicial and legal rationale. …

“It starts with the law, and it starts with how we interpret this law and using the same type of interpretive techniques regardless of what the real world political results may be, but having a consistent legal approach. That doesn’t always lead to results that one might characterize as liberal or conservative.”

Fortunately, these two men stayed strong and took their rightful places on the bench.