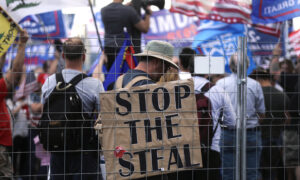 He says that he has no confidence in the election results of some states, and that Congress has the right to deny them.

“I am very much concerned about the election integrity of the United States of America,” Brooks said.

“Well, in the United States Congress, we control who the president of the United States is. The courts do not, okay. Federal courts, Supreme Court, they have a role in the process. However, the ultimate say over whether to accept or reject those Electoral College votes, in that instance in Florida, now for any state, is not a court’s job. It is Congress’s job.”