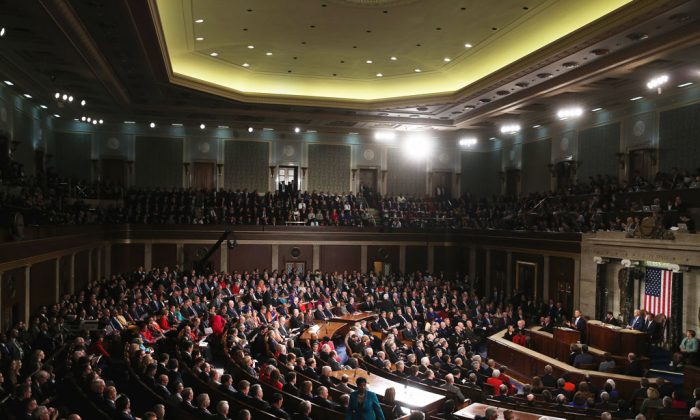 President Barack Obama delivers the State of the Union address to a joint session of Congress in the House Chamber at the US Capitol on Jan. 28, 2014, in Washington, DC. (Mark Wilson/Getty Images)
Middle East

Congress Equivocates on Declaration of War Against ISIL

WASHINGTON—This year, President Barack Obama has laid out goals to “destroy” the Islamic State of Iraq and the Levant (ISIL). “America will lead a broad coalition to roll back this terrorist threat,” he said to the American people on Sept. 10.

Congress has held back since this summer on approving the president’s actions of sending additional military advisors to Iraq, followed by humanitarian aid and airstrikes. Funding for this war—a term the administration uses—was attached to the continuing resolution that funds the government until Dec. 11, although ISIL by name was not stated. It included $500 million for training and equipping Syrian rebels, according to Roll Call.

While the U.S. Constitution makes the president Commander-in-Chief of the armed forces, it confers on Congress in Article One, Section Eight, the power to declare war. The framers of the Constitution did not want this power to reside in the executive branch.

Kaine said framers of the U.S. Constitution were trying to set a new course in the way war was decided, which prior to the Constitution was the king’s decision. “We forget how abnormal it is, how unusual it is. … The framers of the Constitution stood in the flow of history and tried to alter it a different direction and put the decision-making powers about war into a legislative branch, taking it away … from an executive.”

However, Members of Congress have been generally reluctant to exercise that power and go on record to authorize even the air war that began Aug. 8, which was an escalation beyond defensive measures.

By what authority did the president have to declare the U.S. campaign against ISIL, otherwise known as ISIS or the Islamic State?

President Obama maintains that he already has the authority dating back 13 years under the 2001 and 2002 Authorizations for Use of Military Force (AUMFs) following the terrorist attacks on 9/11. Some lawmakers, experts, and constitutional scholars are uncomfortable, however, with a new war without new legal authorization.

“With the midterms behind us and three months of air strikes, I think it’s past time to address this issue,” said Jane Harman, former congresswoman, 1993-99, 2001-2011, and director, president, and CEO of the Woodrow Wilson Center, where she spoke Nov. 12.

Harman wrote in an Op-Ed in the Hill, “Obama’s claim that he has all the authorization he needs rests on shaky legal footing.”

Kaine introduced with Sen. John McCain (R-Ariz.) the War Powers Consultation Act of 2014 in January, which would update the past authorizations of military force. A half dozen AUMFs have been introduced in both houses.

Harman said that when she and other Congress members voted for the 2001 AUMF and the “very controversial 2002 Iraq AUMF,” the war with ISIL was not their intention. “This is a fight with a new enemy and a new country.”

Goldsmith said it was “extraordinarily important” that Congress (1) authorize the use of force against the Islamic State and (2) update the 2001 AUMF, “to give that contemporary approval and legitimacy.” The President suggested last week that the above be done, Goldsmith said.

Goldsmith said the president has “used force in a humanitarian context that have never been done before, he’s done things that have really gutted central provisions of the War Powers Resolution; he expanded the 2001 AUMF, when he said he wanted to contract it.” However, if the two things above are done, Goldsmith said it can all be cleaned up for his legacy.

The administration’s declaration that the 2001 and 2002 AUMFs is the basis for the legality of the new war on ISIL seems to be a reversal of what Obama said a year ago.

On May 23, 2013, at the National Defense University, President Obama spoke of the desirability of repealing the 2001 AUMF as the Afghan war was coming to a close. America can continue to fight terrorism without a perpetual war, Obama said.

“And I will not sign laws designed to expand this mandate further. Our systematic effort to dismantle terrorist organizations must continue. But this war, like all wars, must end,” the president said.

But that was in 2013. When the ISIL threat became imminent, the administration no longer wanted to expire the 2001 and 2002 AUMFs. The unending, perpetual war against terrorism got a new life.

A congressional check on presidential power concerning the use of the armed forces is the 1973 War Powers Resolution, which Congress passed over President Nixon’s veto. It requires the President report to Congress on the introduction of U.S. forces in military action abroad, and to end the action within 60 days, with up to 30 additional days in the withdrawal period, unless Congress authorizes an extension or declares war.

But since June, President Obama has not sought congressional approval for military actions in Iraq. Kaine said that in his Article 2 powers, as commander in chief, the president is arguably entitled to use the armed forces for defensive purposes, such as when Bagdad and Erbil—where American embassy personnel were located—were defended from ISIL attack.

We were on the offensive at war with ISIL, “without legal authority,” Kaine said.

Kaine said the framers of the Constitution, particularly Jefferson and Madison, understood that a president could defend against imminent attack without the immediate involvement of Congress. Congress could get involved later. Going on the offense, however, required a congressional declaration.

Goldsmith, a legal scholar on these issues, said that even the purely humanitarian acts of the air droppings of food, water, and medicine for civilians fleeing ISIL, were a stretch of the president’s Article 2 powers, that is, his commander-in-chief role.

“He’s certainly stretched the 2001 AUMF beyond where it had been before to extend to the Islamic State, very controversially. And he has also stretched the precedents in terms of the noncompliance with the War Powers Resolution,” said Goldsmith.

Goldsmith won’t go so far as to say the president is acting “strictly unlawfully,” especially when using Article 2 powers in engaging in self-defense measures.

“I think he is acting deeply and prudently, [but] not consistent with constitutional values or what he said he wanted to do in the past.” He said it was wearisome.

That said, both Goldsmith and Kaine agreed that the bulk of the blame for this constitutional problem lies with Congress, not with the president.

“I think the Congress abdication mentality on this and many other issues is so massive,” Kaine said. He pointed out that the very people suing the president for executive overreach told him not to bring any vote about a war before the midterm elections. Leaders of both major political parties made it clear they were not going to challenge the president on his use of military force in Iraq before the elections, Kaine said.