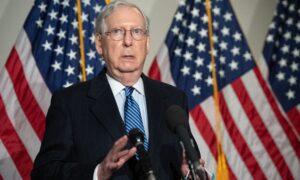 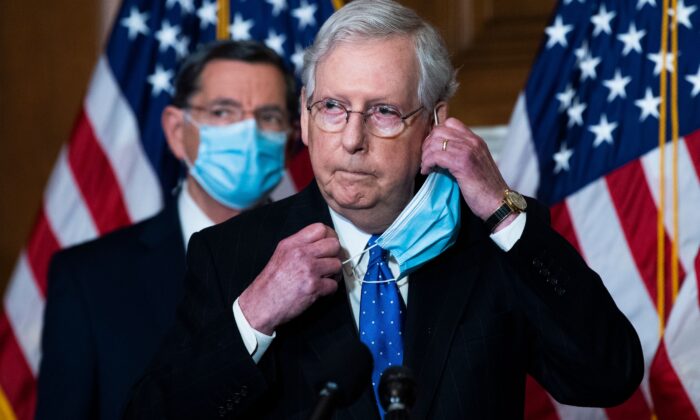 Senate Majority Leader Mitch McConnell (R-Ky.) announced Dec. 20 that a deal has been made on a $900 billion CCP virus relief package following months of failed negotiations.

“As the American people continue battling the coronavirus this holiday season, they will not be on their own,” he said in a Twitter statement. “Congress has just reached an agreement. We will pass another rescue package ASAP. More help is on the way.”

In comments on the floor of the upper chamber, the Senate leader offered few details on the bill.

“The four leaders of the Senate and the House finalized an agreement,” McConnell said, adding that “there will be another major rescue package for the American people.”

The comment came just a day after President Donald Trump and others called on Congress to send direct payments of $1,200.

“Why isn’t Congress giving our people a Stimulus Bill?” the president asked Dec. 19. “It wasn’t their fault, it was the fault of China,” he added, referring to the CCP (Chinese Communist Party) virus, which caused a worldwide pandemic. “GET IT DONE, and give them more money in direct payments.”

Sen. John Barrasso (R-Wyo.) said on Dec. 20 that the final deal would include direct $600 payments and an extension of the small business loan program, known as the Payment Protection Program, that was set up during the CARES Act in March.

“It’s a little more specific this time in that the business has to be fewer than 300 employees, and they have to actually show a loss,” he said.

Last week, Sen. Josh Hawley (R-Mo.) said he worked with Sen. Bernie Sanders (I-Vt.) to include $1,200 stimulus payments in the package, but it appears to have been rejected.

Hawley noted on Twitter that he was “assured by Senate GOP leadership that #COVID direct assistance to working people IS in the #covid relief bill under negotiation & will remain. And on that basis, I will consent to a brief continuing resolution to allow negotiations to conclude.”

House Speaker Nancy Pelosi (D-Calif.) told reporters on Dec. 20 that she wanted to give members some time to review the package before calling a vote.

The bill leaves out two of the most controversial elements in the negotiations: legal protections for businesses from coronavirus lawsuits, which had been sought by Republicans, and the substantial aid for state and local governments advocated by Democrats.

“This bill will not be the final word on congressional COVID relief,” he stated on the Senate floor.