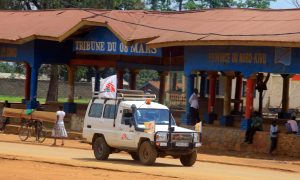 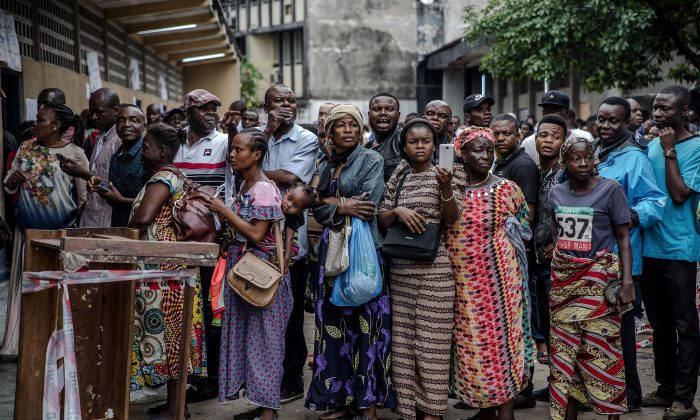 Voters queue to cast their ballot for the Democratic Republic of Congo’s general elections at the College St. Raphael polling station in Kinshasa, DRC, on Dec. 30, 2018. (Luis Tato/AFP/Getty Images)
Africa

NAIROBI, Kenya—Officials say that the preliminary results of the presidential poll in the Democratic Republic of Congo (DRC) won’t be ready by the deadline, adding more delays for announcing the results of an election that was originally supposed to be held in 2016.

On Jan. 5, officials said that they won’t announce the preliminary results by the Jan. 6 deadline, saying they would do so early in the week instead.

The elections will replace President Joseph Kabila, who has remained in power for 18 years, succeeding his father who was assassinated in 2001. His term should have ended in 2016 according to the country’s constitution, but Kabila refused to hold elections for two years. Amidst international pressure, he eventually announced plans for a late 2018 vote. He also said he won’t be seeking another term in power.

In addition to repeated delays, the vote has been marred by security threats, malfunctioning voting equipment, fear of the spread of the Ebola virus, and heavy torrential rains. There also were cases reported of internet shutdowns and social media blackouts.

The polls were initially scheduled to be held Dec. 23, but this was pushed back again.

When the voting day finally came on Dec. 30, several areas affected by the deadly Ebola virus in the country’s eastern region were left out. According to The Associated Press, the government postponed polls in Beni and Butembo until March, long after Congo’s new leader is inaugurated in January, effectively canceling the votes from those two cities.

“The polls could potentially bring about the country’s first democratic transfer of power, but they also risk further destabilization if electoral credibility is undermined,” the institute said after the elections.

On Dec. 31, authorities in the vast central African nation allegedly shut down the internet to prevent what they dubbed “rumor mongering” about the election results. This was criticized by many observers as an alleged attempt to block discussions on social media platforms.

“The authorities in the DRC must immediately reopen all media outlets and reinstate all blocked communications channels,” Joan Nyanyuki, Amnesty International’s director for East Africa, the Horn, and the Great Lakes, said in a statement Jan. 3.

“People must be allowed to freely access and exchange information including online as they wait for election results,” she said, adding the “attack on freedom of expression risks exacerbating an already tense and volatile situation.”

On Jan. 1, authorities also cut off the signal of Radio France Internationale, an independent foreign radio station which is popular in the DRC. On Jan. 2, the signal of two TV channels belonging to opposition candidate Jean-Pierre Bemba, Canal Congo TV and Canal Kin TV, were cut off in the capital city Kinshasa.

The December vote was Congo’s first ever attempt at a peaceful transition of power since its independence from Belgium in 1960.

The official outcome will be declared on Jan. 15, with provisional results originally expected within days, according to the country’s electoral commission. However, the results may be delayed further due to logistical issues.

According to the Brookings Institution, a Washington-based policy think tank, Kabila’s term in office has been characterized by sectarian violence, corruption allegations, and increased crackdown on citizen dissent and the opposition.

The International Crisis Group (ICG) says the just-concluded vote could mark a significant step forward: the first time Congo has experienceds a transfer of power from one elected president to another.

But, it warns, an election lacking in fairness and credibility would do the precise opposite.

“The government’s recent deployment of military reinforcements in several important cities, including Goma, Bukavu, Lubumbashi, and Kinshasa, suggests it is preparing a harsh response to any unrest,” ICG stated, referring to the government’s crackdown on protesters in the wake of the delayed polls.