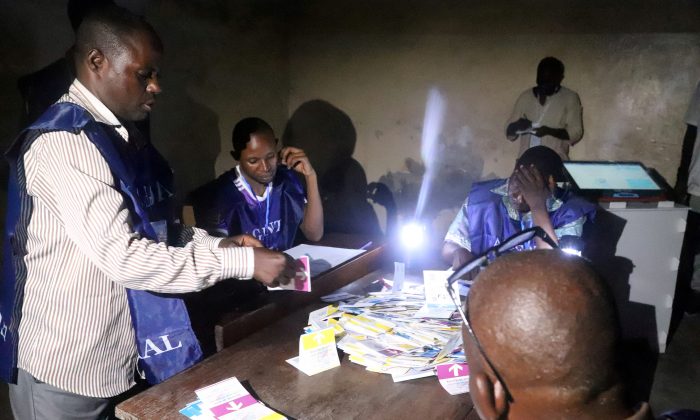 KINSHASA, Congo—Democratic Republic of Congo’s opposition said Dec. 31 it expected one of its candidates to win the presidential election based on early vote tallies, but the ruling coalition expressed confidence that its candidate had won the chaotic contest.

The competing claims followed a disorderly election day on Dec. 30, during which many Congolese were unable to vote due to an Ebola outbreak, conflict, and logistical problems.

After unofficial tallies started to circulate on social media on Dec. 31, mobile internet connections in the capital Kinshasa and other cities slowed or cut out entirely, residents said, in a possible move by authorities to stop the information from circulating.

Government officials couldn’t be immediately reached for comment. Authorities have cut the internet in the past, saying they sought to stop rumors from spreading during protests.

The vote is meant to choose a successor to President Joseph Kabila after 18 years in power and could lead to the vast central African country’s first democratic government.

But the opposition says the election was marred by fraud and accused Kabila of planning to rule from the sidelines through his preferred candidate. The government has said the election was fair.

Any disputed outcome could lead to a repeat of the violence that followed the 2006 and 2011 elections and a wider security breakdown, particularly along Congo’s borders with Rwanda, Uganda, and Burundi, where dozens of armed militia are active.

Pierre Lumbi, the campaign manager for opposition candidate Martin Fayulu, said in a statement posted on Twitter that Fayulu was winning after more than a third of votes had been counted.

“The polls are clear: they put…Martin Fayulu easily in the lead,” he said.

Vital Kamerhe, the campaign manager to another opposition candidate, Felix Tshisekedi, said earlier that initial counting showed Tshisekedi and Fayulu neck-and-neck in the lead, both with more than 40 percent of the vote.

He said the ruling coalition candidate, Emmanuel Ramazani Shadary, who is backed by Kabila, had only about 13 percent, although a significant part of the vote remained to be tabulated.

Shadary’s campaign said he will win.

“For us, victory is certain,” Nehemie Mwilanya, Kabila’s chief of staff and a member of Shadary’s campaign, told a news conference Dec. 31, without providing figures. Shadary’s campaign said it has collected about 30 percent of the results but will not release any results before the national election commission (CENI).

The election is a first-past-the-post system with no run-off. The first partial results are expected from CENI on Jan. 1.

Opposition officials complained of widespread irregularities, including several instances of what they said was outright fraud in Shadary’s favor.

According to a Western diplomat, speaking on condition of anonymity, almost half of polling places opened late, 30 percent encountered problems due to malfunctioning voting machines or absent voter rolls, and 10 to 15 percent were located in prohibited zones, including police posts and private residences.

The most recent opinion poll before the election, released by New York University’s CongoResearch Group on Dec. 28, showed Fayulu, a former ExxonMobil manager, leading the race at 47 percent. Tshisekedi had 24 percent and Shadary 19 percent.

Election Day was mostly peaceful, despite several violent incidents, including an altercation at a polling place in eastern Congo in which at least three people were killed.

But the Catholic bishops conference (CENCO), which deployed thousands of vote monitors, said that many polling places opened late and were located in prohibited areas.

CENI President Corneille Nangaa, however, said the vote had gone smoothly, aside from some minor difficulties, and the CENI rejected charges of fraud.

More than 1.2 million Congolese in three opposition bastions were unable to vote at all, after the CENI canceled the polls there last week, citing an Ebola outbreak and ethnic violence.

However, in the Ebola hotspot of Beni, an opposition stronghold, residents staged a mock presidential election to show the authorities a decision to postpone the vote there due to health fears was unfounded.

By Giulia Paravicini and Stanis Bujakera