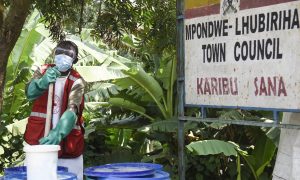 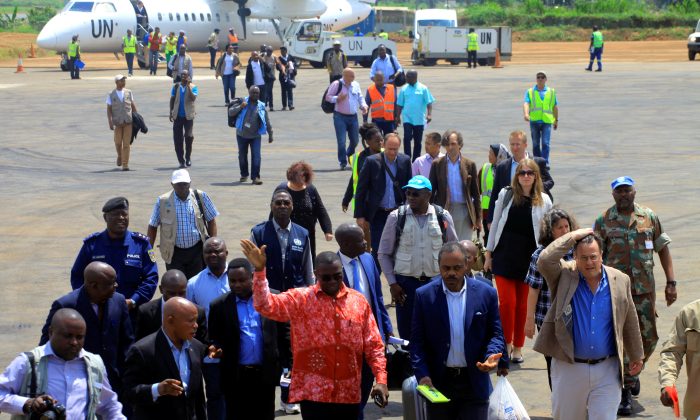 Governor Julien Paluku of the North Kivu province talks to Congo's Health Minister Oly Ilunga Kalenga as they lead an anti-Ebola delegation to arrive in the town of Beni in the Democratic Republic of Congo, August 2, 2018. (Reuters/Samuel Mambo)
Africa

GOMA, Democratic Republic of the Congo—Congo’s health minister resigned on July 22 after being stripped of responsibility for managing the country’s Ebola outbreak, over the controversial introduction of a second vaccine to contain the spreading epidemic.

Oly Ilunga has overseen Democratic Republic of the Congo’s near year-long response to what is the second deadliest Ebola outbreak in history. It has killed more than 1,700 and been declared an international health emergency by the World Health Organization (WHO).

In his resignation letter, the minister criticised pressure by unnamed “actors” to deploy the second vaccine, manufactured by Johnson & Johnson and backed by the WHO.

It has yet to be used on the ground due to Ilunga’s objections. It is designed to complement a Merck treatment that has been given to 170,000 people and proved effective.

Ilunga has said the J&J vaccine has not been proved effective and that deploying a second one would confuse people in eastern Congo, where health workers are struggling to overcome widespread misinformation about the haemorrhagic fever as well as sporadic hostility.

Ilunga said it would be “fanciful to think that the new vaccine proposed by actors who have shown an obvious lack of ethics by voluntarily hiding important information from medical authorities, could have a significant impact on the control of the current outbreak”.

J&J says the vaccine has been tested on more than 6,000 volunteers and raised no particular safety concerns.

Its chief scientific officer, Paul Stoffels, said in a telephone interview that the company had been “very transparent, very open and in full communication” with Congolese authorities.

He said J&J had discussed with Muyembe how people could be vaccinated around eastern Congo’s biggest city, Goma, where a first Ebola case was confirmed last week, to create a protective “curtain”.

“Whether they use it or not, it’s fine for us,” said Stoffels, referring to Congolese officials. “They have to judge based on their personal knowledge of how and where to use it.”

The WHO and other international donors including medical charity Medecins Sans Frontieres have publicly supported using the second vaccine, of which 1.5 million doses are available.

A WHO spokesman said the organisation was grateful for Ilunga’s leadership and dedication and looked forward to “working closely with the new coordination team as we have with the previous one”.

Last week, the organisation labelled the outbreak an international emergency, a rare designation aimed at galvanising global support as it threatens to gain a foothold in neighbouring Rwanda and Uganda.