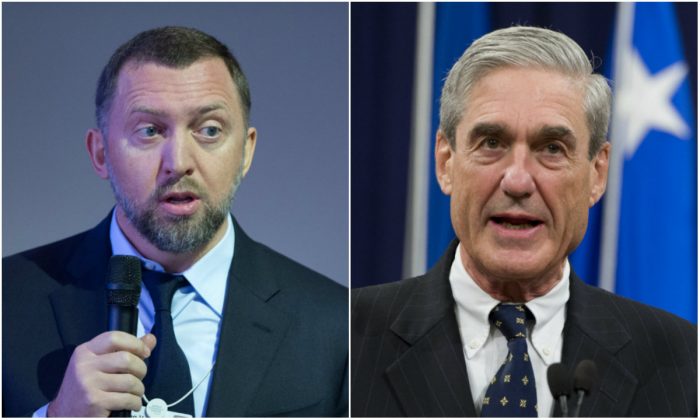 Special Counsel Robert Mueller has had his share of problems recently, but now one appears to have reached the level of a conflict of interest, according to a Monday, May 14, investigative report by The Hill’s John Solomon.

Mueller has indicted 19 people and three companies, but none of the charges involved Trump-Russia collusion.

As Solomon uncovered, however, Mueller is linked to the same Russian oligarch as one of the indictees.

One of the agents involved was Andrew McCabe, the recently fired FBI deputy director involved in starting the Trump-Russia probe that was later taken over by Mueller.

Solomon’s report relies on anonymous sources, though he had the Levinson mission itself and a number of other details confirmed by Deripaska, his lawyer, the Levinson family, and Robyn Gritz, a retired FBI agent who supervised the Levinson case in 2009.

Gritz said he “kept Director Mueller and Deputy Director [John] Pistole informed of the various efforts and operations” of the Levinson mission.

Because of economic sanctions imposed on Iran and other laws, the FBI couldn’t openly spend taxpayer money on the mission.

Deripaska’s aluminum industry empire, on the other hand, already did business in Iran.

The billionaire eventually agreed to orchestrate the mission but insisted the operation neither involve nor harm Russia.

His lawyer said he spent $25 million on a private search-and-rescue team that worked with Iranian contacts while monitored by the FBI.

Deripaska eventually managed to arrange the release of Levinson, but the deal was scuttled by the State Department.

“We were told at one point that the terms of Levinson’s release had been agreed to by Iran and the U.S. and included a statement by then-Secretary of State Hillary Clinton pointing a finger away from Iran. At the last minute, Secretary Clinton decided not to make the agreed-on statement,” said David McGee, a former federal prosecutor who represents Levinson’s family.

Levinson hasn’t been found since.

Even though the mission fell through, Deripaska was rewarded. While he’s been persona non grata in the United States since at least 2007 (for alleged organized crime connections and other crimes), FBI agents arranged special access to the United States for him, first on a rare law enforcement parole visa, then on a diplomatic passport, even though he doesn’t work for the Russian Foreign Ministry, Solomon wrote.

It’s not clear if Deripaska has earned any other favors from the FBI, but the bureau sought him out again in 2016, just two months before the election, according to his lawyer.

Three agents visited Deripaska at his hotel room when he was in New York as part of Russia’s United Nations delegation. At least one of the agents had worked with Deripaska on the Levinson mission, Solomon wrote, but it’s not clear whether it was McCabe.

During the hourlong visit, the agents proposed that Trump’s campaign was secretly working with Russia to hijack the U.S. election.

“Deripaska laughed but realized, despite the joviality, that they were serious,” the lawyer said. “So he told them in his informed opinion the idea they were proposing was false. ‘You are trying to create something out of nothing,’ he told them.”

The FBI then contacted Deripaska some more in 2017, Solomon wrote.

Deripaska’s name came under the media spotlight last year when the Associated Press reported the oligarch paid millions to Paul Manafort to promote Russian interests in the United States and Europe between 2005 and 2009.

Manafort has spent decades campaigning and lobbying for various political interests around the world. In 2016, he offered to volunteer for the Trump campaign and started in March 2016. He became the campaign manager in June and left in August 2016, after media dug up his work for Ukrainian President Viktor Yanukovych between 2005 and 2014.

On Oct. 30, Mueller filed charges against Manafort, saying he hid from authorities the millions received for his work with Yanukovych, dodging taxes in the process. He also allegedly lied to banks about his income to get better loans.

Yet, in the entire 28-count indictment, there’s not a single mention of Deripaska.

When the Manafort case reached trial, federal Judge T.S. Ellis, III threatened to throw it out, because the charges had “nothing to do with Russia,” agreeing with Manafort’s defense team, who argued that the charges against their client are outside of Mueller’s investigative scope.

Deripaska now presents a conflict of interest for Mueller, because the FBI, under Mueller’s leadership, received financial help from the Putin associate, who is at least a witness in the current investigation, Harvard law professor Alan Dershowitz told Solomon.

“The real question becomes whether it was proper to leave [Deripaska] out of the Manafort indictment, and whether that omission was to avoid the kind of transparency that is really required by the law,” Dershowitz said.

Whatever clout Deripaska carried with the FBI couldn’t shield him from sanctions imposed by the Trump administration in April, a move that slashed the stock price of his aluminum company, Rusal, by almost 60 percent.