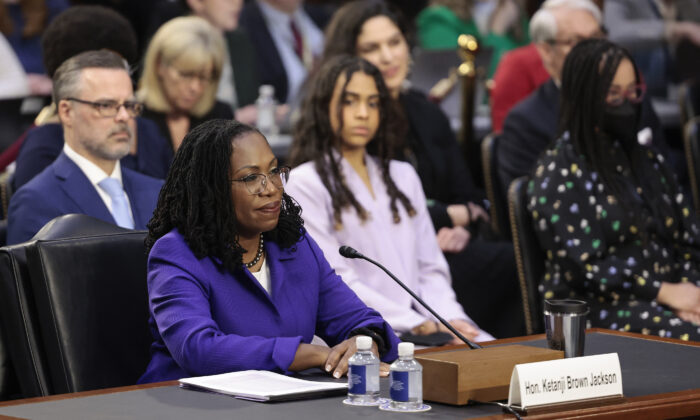 “You and I had a very positive and productive meeting in my office,” Cruz also noted at the outset of what became one of the most intense question-and-answer sessions on the second day of Jackson’s confirmation hearing before the Senate Judicial Committee.

At issue was Jackson’s understanding of and apparent enthusiasm for Critical Race Theory (CRT), the view that America is an inherently and irredeemably racist society, and the New York Times’ controversial “1619 Project” that is based on CRT.

The Times project claims the American colonists declared independence primarily to protect the institution of slavery.

Cruz asked Jackson what she meant when during a lecture in 2020 at the University of Michigan she praised as “a provocative thesis that the America that was born in 1776 was not the perfect union it purported to be” and cited the 1619 project as support for that thesis.

The Texas senator asked Jackson if she agreed that protecting slavery was one of the purposes of the Declaration of Independence.

Jackson acknowledged calling the thesis “provocative,” but then said, “it is not something I’ve studied, it doesn’t come up in my work, I was mentioning it because it was at least at that time something that was talked about and well known to the students I was speaking to at the law school.”

When Cruz pointed out to her that the New York Times had substantially revised the digital version of the 1619 Project to remove the claim about slavery and the declaration, Jackson said she was not aware of that fact.

The Times product continues to be used in many public school systems across the country despite widespread academic and media criticism.

Cruz then asked Jackson what her understanding is of CRT and she responded by describing it as “an academic theory that is about the ways in which race interacts with various institutions, it doesn’t come up in my work as a judge.

“It’s never something that I’ve studied or relied on and it wouldn’t be something I would rely on if I were on the Supreme Court.”

Jackson further responded that she does not agree with a description of American society as irredeemably racist but qualified her answer by again noting that she has never studied CRT.

Cruz told Jackson he was confused by her response because in a 2015 speech at the University of Chicago she said “sentencing is just plain interesting … because it melds together myriad types of law—criminal law, of course, but also administrative law, constitutional law, critical race theory, negotiations, and to some extent, even contracts.”

A visibly irritated Jackson told Cruz “with respect senator the quote you are mentioning there was about sentencing policy, it was not about sentencing. I was talking about the policy determinations of bodies like the [U.S.] Sentencing Commission when they look at a laundry list of various academic subjects as they consider what policy should be.”

But Cruz interrupted Jackson, pointed out that at the time she was vice-chairman of the commission, and then repeated his question: “What did you mean that what you were doing was Critical Race Theory?”

Jackson told Cruz the slide he was showing of her quote did not contain all of the factors that she cited in her remarks. “But none of that relates to what I do as a judge,” she insisted.

Cruz was followed in questioning Jackson by Sen. Chris Coons (D-Del.) who asked the judge if she had ever cited the 1619 Project in any of her more than 500 federal court decisions.

Jackson said she has never cited it.

Coons also asked Jackson if in her time on the federal bench she had “ever used, employed, or relied upon Critical Race Theory to determine the outcome of a case or to impose any sentence, as a framework for your decision making?” Jackson again said “no.”

In a related development from the hearing, Sen. Charles Grassley (R-Iowa), the judiciary panel’s ranking Republican, issued a statement as Cruz began his questioning of Jackson.

In the statement, Grassley said, “in speeches and writings, Judge Jackson has frequently cited leading advocates and ideas of Critical Race Theory. Judge Jackson praised the late Derrick Bell, better known as the godfather of CRT, and his wife Janet Bell.

“She referred to his 1993 book, ‘Faces At The Bottom Of The Well: The Permanence Of Racism’ as ‘essential reading’ and ‘a pioneering contribution to critical race theory scholarship.'”