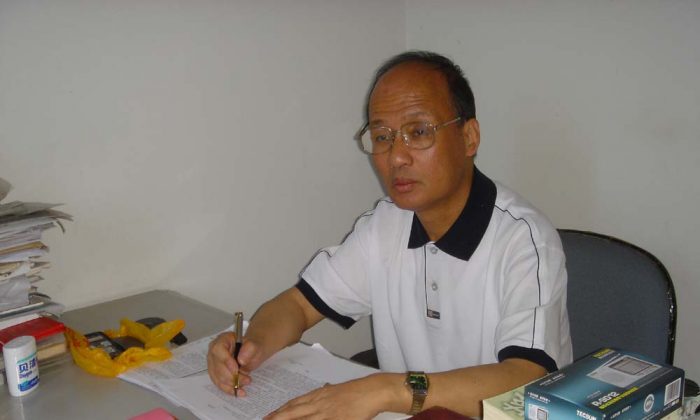 Zheng Enchong, a Shanghai-based human rights lawyer, has been under house arrest for over a decade. Local security forces have frequently harassed and abused him during his confinement.

But early last year, Zheng, 67, found the restrictions gradually relaxed after he revealed sensitive information about various top members of a powerful Shanghai political clique to The Epoch Times.

In July 2016, the Shanghai authorities tried to buy Zheng’s silence by sending him and his wife on a staycation at a luxury villa. The security detail assigned to the Zhengs was reduced, their curfew was removed, and the police stopped tailing the Zhengs wherever they went. On Christmas day, security agents allowed Zheng, a Christian, to attend church services and other Christmas festivities.

This June, however, the Shanghai authorities reverted to repression.

In the morning of June 2, Chinese internal security agents Shi Jinrong and Zhang Xiaomin barged into Zheng’s apartment and warned him against giving interviews, supposedly because the anniversary of the Tiananmen Square Massacre (June 4) was coming up.

The agents’ behavior is to be expected. Every year, Chinese security forces go on heightened alert around so-called “sensitive dates,” or dates that the Chinese Communist Party considers to be politically sensitive. Security personnel even proactively seek out and suppress activists, dissidents, or persons of faith connected with the events that occurred on those dates.

Zheng told agents Shi and Zhang that he couldn’t make any promises to stay silent after June 11, the day close to a “sensitive date” for practitioners of Falun Gong. On June 10, 1999, the Chinese regime established the “610 Office,” an extralegal, Gestapo-like agency that coordinates the persecution of Falun Gong, a traditional Chinese spiritual discipline. Former Communist Party leader Jiang Zemin officially launched the persecution on July 20.

Jiang also heads the “Shanghai Gang,” a clique of influential officials who were responsible for Zheng Enchong’s house arrest. Zheng told the internal security agents that he feels obliged to speak out about the misdeeds of the Shanghai Gang given that one prominent clique member, Chen Xu the former Shanghai chief public prosecutor, recently became the subject of an official corruption investigation.

Around 6 in the morning of June 11, Zheng was ambushed by four police officers while taking out the trash on the ground floor of his apartment building. The officers, who were part of the security detail guarding Zheng, beat him with a steel radiator, leaving him with a bloody head injury and swelling in the left side of his face.

Zheng believes that he was assaulted “because I exposed Chen Xu” the ex-chief public prosecutor and Shanghai Gang acolyte, and not because of “sensitive dates.”

Zheng said that people whom he knew weren’t interested in politics were coming up to him in the streets to talk about his exposing Chen’s corrupt activities and political allegiance. Local residents, as it turns out, had been widely circulating Zheng’s recent interviews with The Epoch Times on the popular Chinese social media platform WeChat.

Zheng believes that the circulating of The Epoch Times articles in Shanghai is a good omen for the future—this newspaper is banned in China, and Chinese citizens could run afoul of the authorities if they are caught reading a publication that frankly addresses human rights abuses by Communist Party agents.

“That people dare to breakthrough the Chinese regime’s control and circulate my interviews with The Epoch Times shows that the authorities no longer have the situation under control,” Zheng said.

After the beating, Zheng decided to hide out at a friend’s home. But he soon ran into a Kafkaesque situation.

On June 16, the Shanghai police summoned Zheng for a chat, and announced that the four police officers who assaulted Zheng were going to be “transferred away.” Also, the Shanghai authorities decided to house Zheng and his wife in a two-bedroom suite in a big hotel for their “safety.” But on arrival at the hotel, Zheng found that the four police officers had been assigned there to guard him.

“The fact that you’re made to live here implies that we who beat you are not really going to be transferred anywhere,” Zheng recalled one of the police officers telling him.

Yi Ru contributed to this article.